HOME NRI JOURNAL What is FinTech?

FinTech combines the words “finance” and “technology” to refer to innovative financial services endeavors that make use of IT. NRI has consistently been a leader in the area of FinTech, placing in the top 10 in a U.S. journal’s annual ranking of FinTech companies for seven consecutive years. Here, we will convey some of NRI’s opinions on FinTech.

“FinTech combines the words “finance” and “technology” to refer to innovative financial services endeavors that make use of IT. [remainder omitted]”

FinTech is getting a lot of buzz right now in Japan, and we hear about it on the news seemingly every day. However, different commentators all seem to have slightly different perceptions of what FinTech actually is, and it seems that in many cases, the discussion lacks coherence. The biggest reason for this is that the concept of FinTech has evolved over time.

At NRI, we see FinTech as having four stages of conceptual evolution, from “FinTech 1.0” to “FinTech 4.0”. 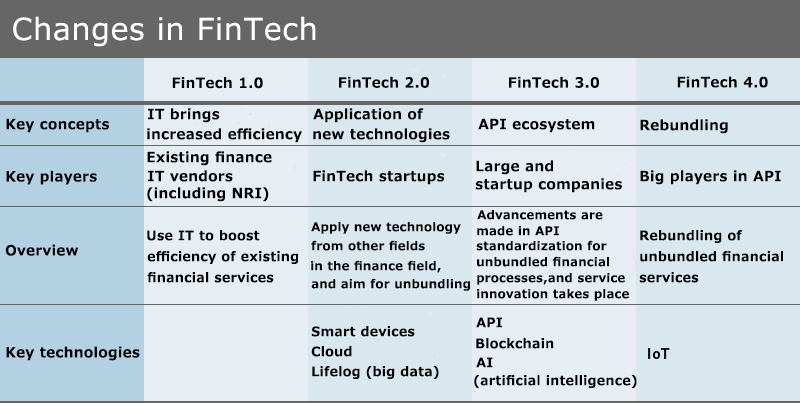 FinTech 1.0: IT brings increased efficiency and sophistication to the financial industry

FinTech 1.0 aims to use IT to bring increased efficiency and sophistication to financial functions, and is evolving in four areas: increased back-office efficiency, increased sophistication of payment methods, improved security, and new channel expansion and channel integration. FinTech for compliance with regulations is also called “RegTech” (Regulation Technology).

Previously, financial institutions were the only institutions that could cohesively provide a diverse variety of services from settlement of payment to deposits and financing. In order to provide such comprehensive financial services, large-scale infrastructure and systems were required. However, the evolution of IT made it possible for financial functions that were previously provided in an integrated manner by a single financial institution to be provided separately, and lowered barriers to participation in the financial services industry by those in other industries. This phenomenon is called “unbundling”, and with it we are seeing the emergence of “disrupters”— FinTech business ventures or FinTech startups who are looking to unbundle the existing financial services business.

At present, activities surrounding FinTech 2.0 are the form of FinTech attracting the most attention.

FinTech 3.0: Rise of the API economy

The unbundling of financial functions in FinTech 2.0 can be seen as an attempt to “componentize” financial functions. There is also a movement toward re-combining and providing these componentized functions, and this uses what are called APIs (Application Programming Interfaces). An API is a set of procedures and protocols used when the functions of one software are called up from a different software, and through it, external programs, services and data can be utilized as “components”.

By utilizing multiple APIs provided by FinTech startups in an integrated manner, it becomes possible to provide services that rival those provided by existing financial institutions. This stage is FinTech 3.0.

Further, in the age of FinTech 3.0, completely new technological innovations come to be applied to finance—namely, artificial intelligence (AI) and blockchain technology. These two technologies will further accelerate and magnify the changes brought about by APIs in financial business.

As we saw in the case of internet services, unbundled services tend to end up being re-integrated by a small number of platforms. For example, Yahoo and Google created environments where multiple web services previously provided separately (e-mail, calendars, video streaming and the like) can all be used under one ID. Business model changes seen in the internet world can also be observed in the world of finance.

Unbundled financial services are provided as APIs, and we are now in an age where by combining those APIs, both financial institutions and other businesses will be able to create new financial services. Companies in non-financial fields will most likely serve as platforms for these services. This stage is FinTech 4.0.

NRI: A leader in FinTech

Finance and IT were inseparably intertwined even before the word FinTech appeared. Since 2008, the American finance journal American Banker has published “FinTech Forward Rankings” for financial IT service vendors.

Incidentally, NRI placed tenth in the 2016 “FinTech Forward Rankings”, which were announced on October 5th, and also placed ninth in the “FinTech Rankings” published by IDC Financial Insights, which were announced on September 7th. NRI has consistently been a leader in the field of FinTech, placing in the top ten in both of these rankings for seven consecutive years.

We would like to continue conveying NRI’s various FinTech-related opinions here going forward.