Why Sustainable Corporate Growth Should Be Viewed as a “Management Relay”

“Sustainable growth” is something of a buzzword in the corporate world. It suggests that rather than focusing on the management performance of individual company presidents, growth should be evaluated in terms of the continuous results achieved across generations of corporate leadership. The reason: according to an NRI survey which treated successive administrations as a sort of “management relay”, the longer a president who has significantly boosted corporate value remains in office, the greater the likelihood is of failure when the baton is passed to the next company head.

When presidents are evaluated based on their “management relay” performance

As an example, let’s look at the performance results of presidents who have been with some of the largest companies in Japan for the past 30 years. NRI surveyed the results by measuring performance in terms of corporate value (relative aggregate market value, excluding the effects of the stock market). 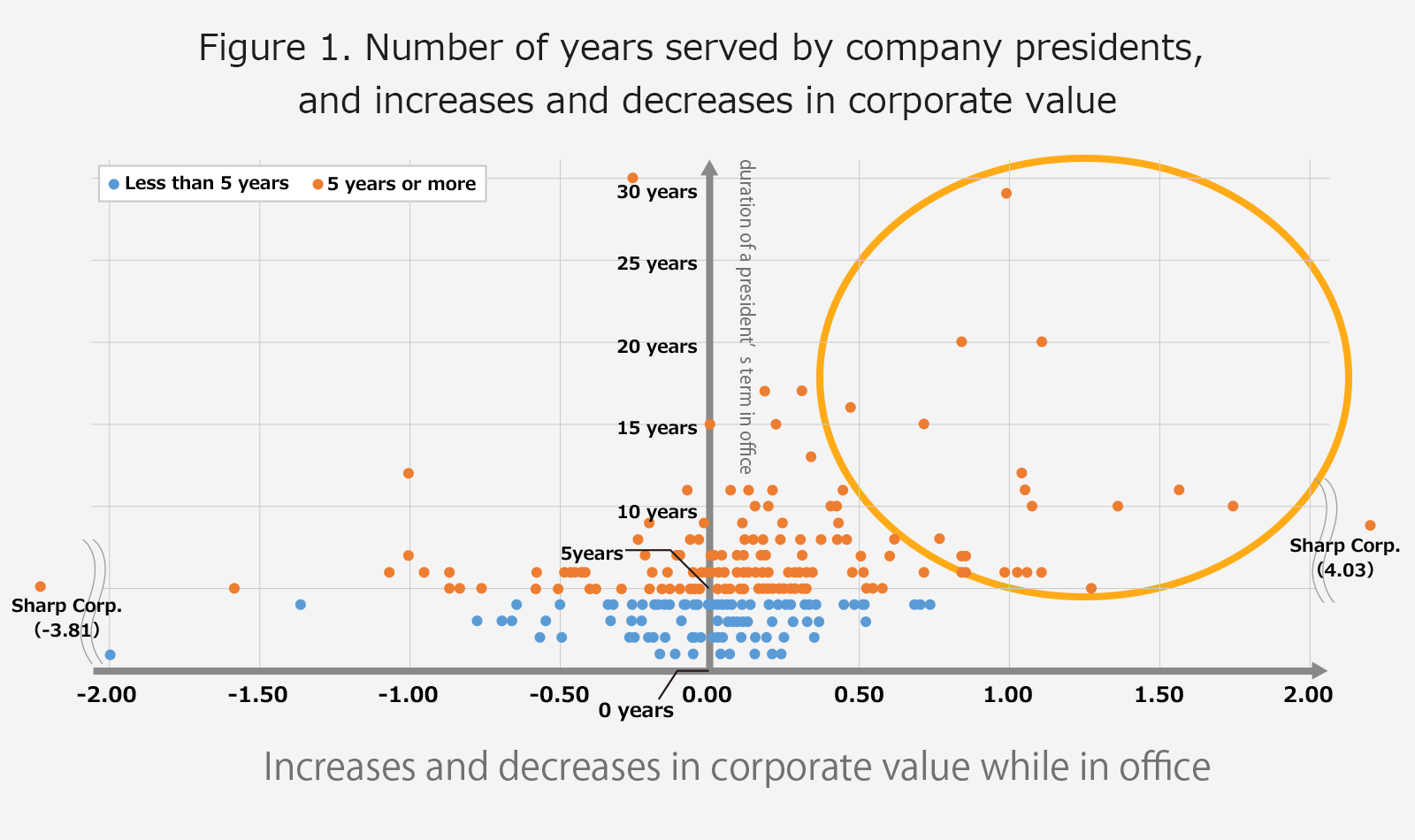 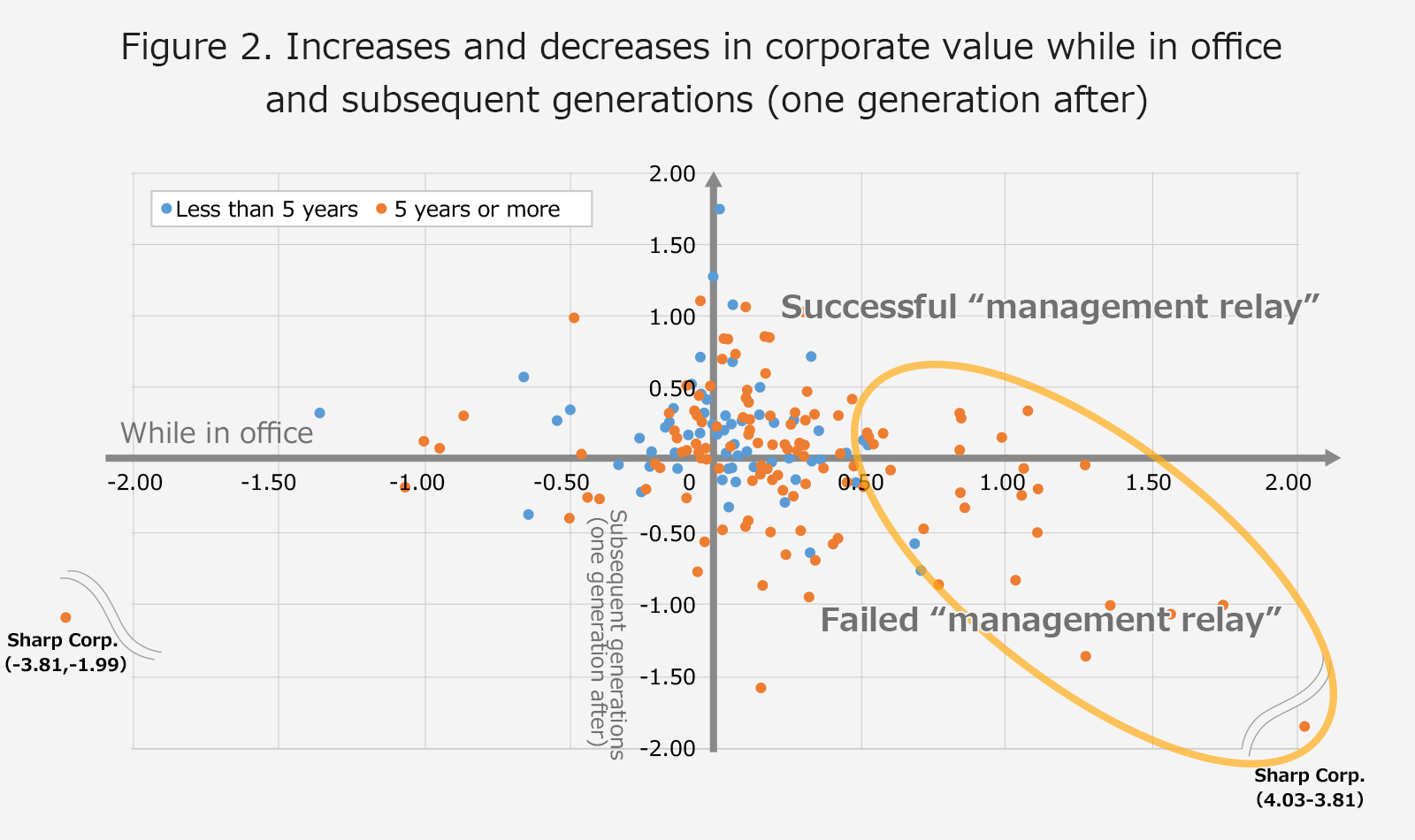 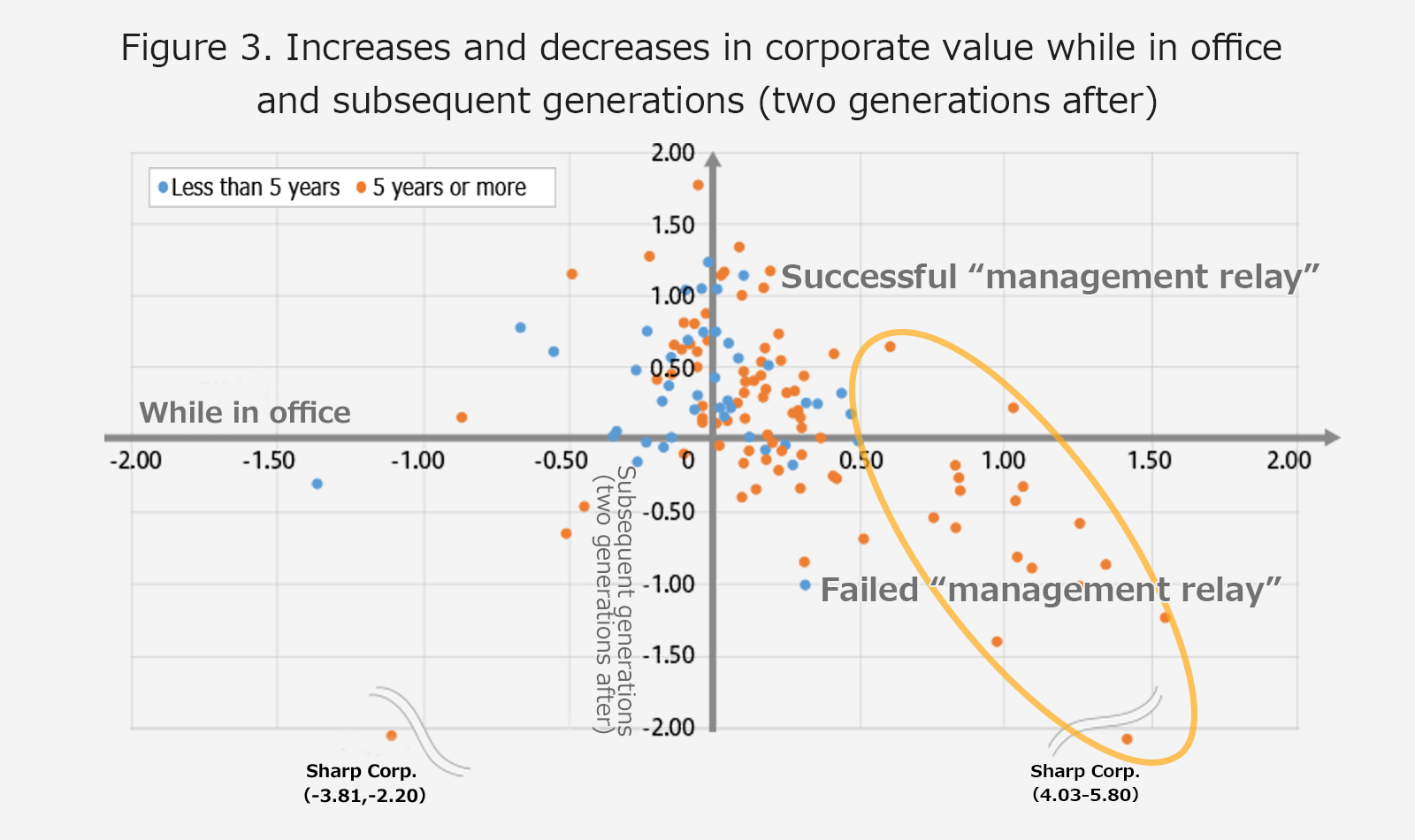 Yet when we look at their performance as a “management relay” involving successive company leaders, and not as results produced by a particular president, our assessment of them is completely different.

In figure 3 especially, which looks at performance results up to the second successive generation on the vertical axis, we see that presidents who markedly increased corporate value during their time in office are at an even greater risk of failing the management relay.

“Based on the data, we see that with presidents who had longer tenures and who significantly enhanced corporate value, their companies lost that value in the following generations”, says NRI’s Shinichi Matsuda, who conducted the survey.

If we look at these survey results alone, a long tenure for a president would seem to be a problem, but Matsuda holds a different view. “From my own experience thus far observing various corporate management positions, whether or not the management relay succeeds depends on a company’s managerial ‘tenure structure’—that is, the timing and combination of the president’s and the executive management’s tenures”, Matsuda says. Moreover, the results of the survey—which grouped everyone from the president down to the fifth or sixth officer in the hierarchy as executive management—demonstrated empirically that there are two mechanisms which determine the success or failure of the management relay.

In other words, the key to whether the management relay will succeed or fail lies in the managerial “tenure structure”, not in the duration of a president’s term in office. For instance, General Electric’s CEO Jeffrey Immelt has been in his position for over 15 years, but he is also supported by an executive management that has been in place for more than a decade, meaning that GE has maintained a high standard of experience at the upper-management level. This in turn has bolstered GE’s sustained growth—its management relay.

Corporate giants bear a heavy responsibility regarding the management relay

Of course, there are many managers who are required to place greater importance on the fruits of their own terms in office than on the management relay. Raising corporate value by repeatedly shaking up the executive management and closing ranks around the president could also be considered a kind of management style. As Matsuda argues, however, “Managers of large-scale enterprises have an especially heavy responsibility to succeed in the management relay.” 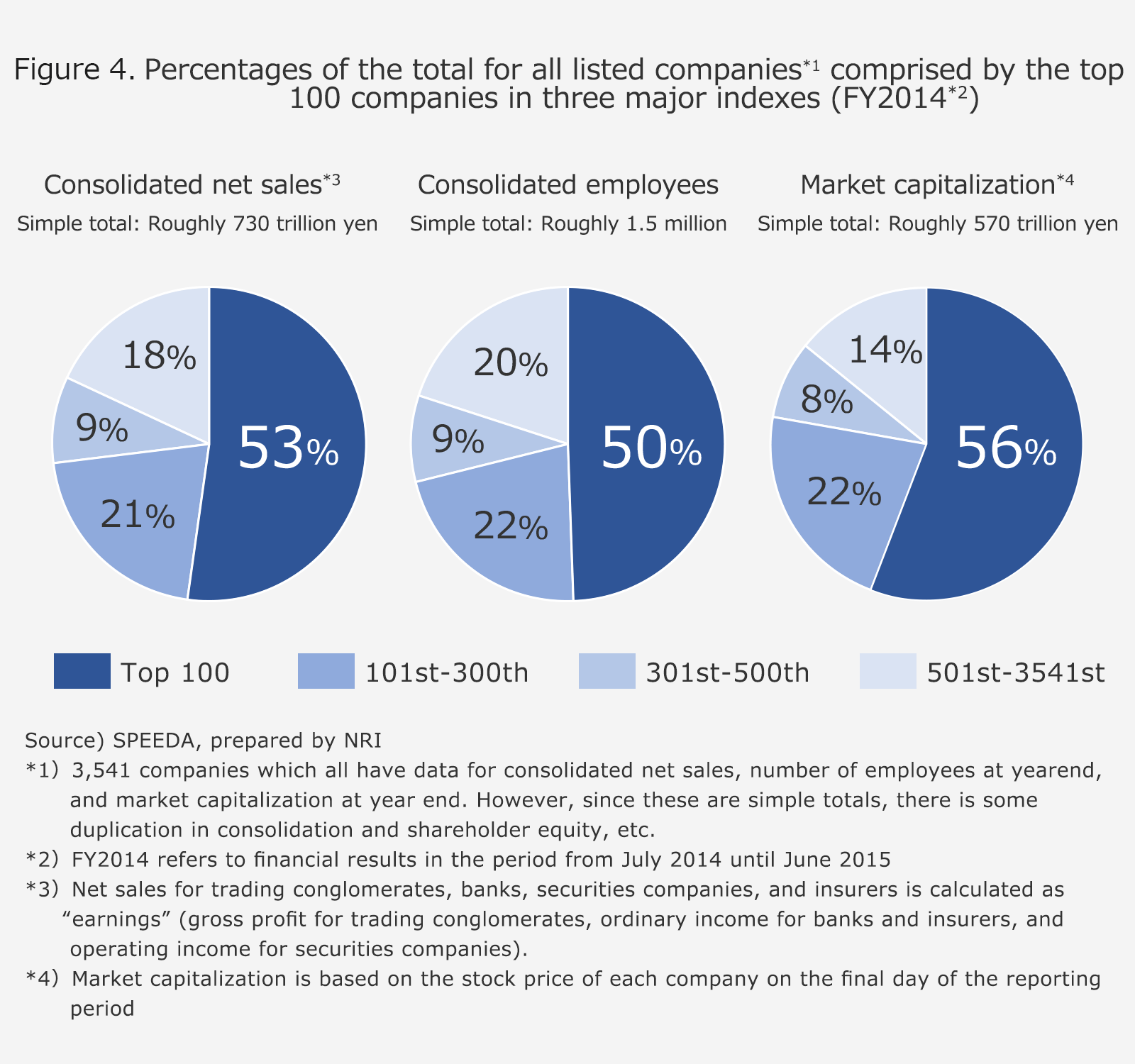 As shown in figure 4, the top 100 Japanese corporate giants make up 50% of all sales, workforce numbers, and aggregate market value for listed companies. When these enterprises fail to achieve a smooth transfer of leadership in changing their presidents, not only does the Japanese economy take a major hit, but it also causes many workers to lose their jobs and deals a blow to stock investments, including public pension funds. Corporate giants arguably have an enormous responsibility to strive to succeed in the management relay. 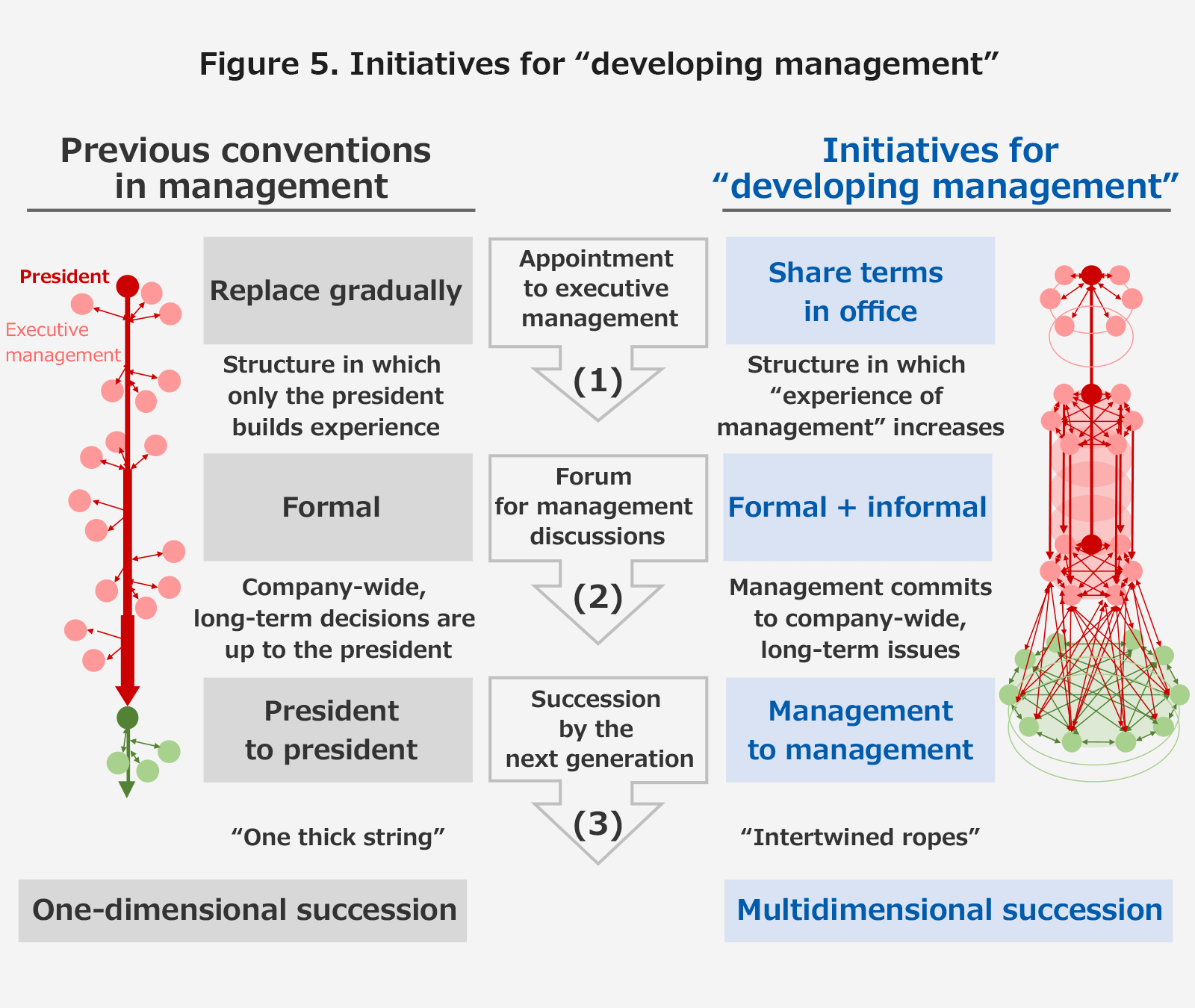 Matsuda points to there being three points in common in the approaches of managers who take the management relay seriously, which one might call “administrative development”. More specifically, as seen in figure 5, this means appointing executive management personnel whose term in office overlaps with that of the president, as well as providing an informal space for senior managers to have discussions, and identifying the next generation of upper management to ensure a succession of leadership.

The challenge of viewing sustainable corporate growth as being a “management relay” is starting to gain interest from financial papers and institutional investors as well. Going forward, companies wishing to divine ways to achieve sustainable growth may do well to focus on efforts toward administrative development.