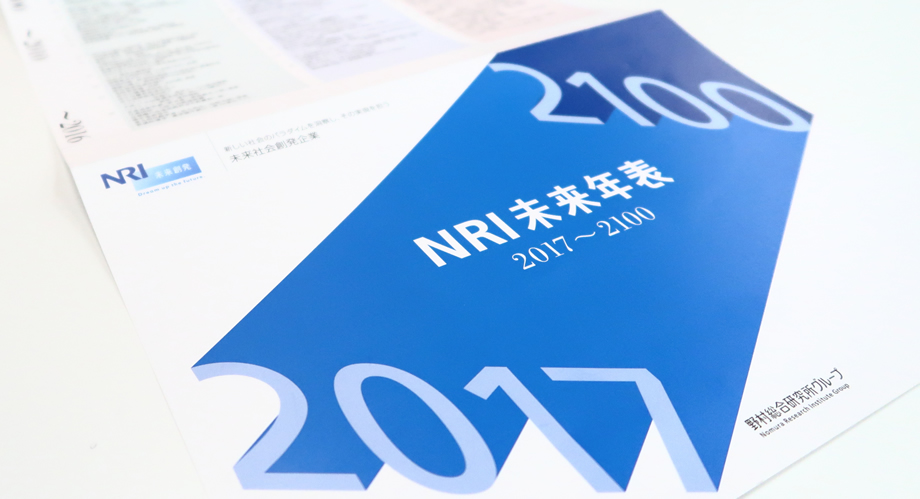 “NRI’s Future Timeline”: Predicting the Future Up To 2100

Each year, Nomura Research Institute, Ltd. (“NRI”) prepares its “NRI Future Timeline”, which classifies various events that are scheduled or predicted to occur in terms of “Politics and Society”, “Economics and Industry”, and “International” categories and sets forth NRI’s projections for the future. At the end of last year, the company released its latest version, “NRI Future Timeline: 2017-2100”, which forecasts the prospects up to the year 2100. We provide an overview of this newest release here.

Japan’s declining population is leading the housing market to shrink

With the world’s fastest declining birthrate and most rapidly aging populace, Japan will continue to see its population numbers fall. Projections by the National Institute of Population and Social Security Research (IPSS) tell us that Japan’s total population, which in 2015 stood at 127.1 million, will drop down to 120.7 million in 2025, fall below the 100 million mark to just 97.1 million in 2050, go down to 86.7 million in 2060, and finally fall to approximately 83 million in the year 2100, which amounts to roughly two-thirds of its current level. In 2015 the country ranked eleventh in the world in total population, yet it will have fallen to 30th place in the year 2100, and will no longer be thought of as a highly populous country.

No area will feel the effects of this population shrinkage more deeply than the housing market. NRI continually conducts forecasts of Japan’s housing market, and estimates that the number of new housing starts—which stood at approximately 920,000 in FY2015—will contract to about 670,000 in FY2025, and drop down to only about 540,000 in FY2030.

Use of AI and robots underway in developed countries

As the aging of the population is progressing on a global scale, with this phenomenon being most conspicuous in developed countries, the real concern is labor shortages. Deficiencies in the labor force have direct links to economic activity.
According to the Cabinet Office, it is projected that by the year 2030 Japan’s work force will lose approximately 9 million workers compared to 2013 figures, dropping to 56.8 million. Meanwhile, the outlook from The Ministry of Economy, Trade and Industry (METI) suggests that around the same year we will see such gains in efficiency and automation from artificial intelligence (AI) and robot technology that the job market will shed 7.35 million workers, but this estimate envisions a future in which the contraction of the labor force will be substituted for by AI and robots.

A joint study conducted by NRI and Oxford University Associate Professor Michael Osbourne et al. estimated that in the period from around 2025 to 2035, roughly 49% of Japan’s labor force could be replaced by AI and robots.

Further, a different NRI forecast indicated that in 2050, the market scales for self-driving vehicles using AI and nursing care robots will be enormous, respectively amounting to roughly 4.6 trillion yen and 277 billion yen.

U.S. futurist Ray Kurzweil predicts that in the year 2045, AI capabilities will surpass the sum of all human intelligence. It may be inferred that efforts are underway to effectively leverage such AI capabilities in order to compensate for the labor shortages expected to befall developed countries, and to maintain and improve productivity.