The mobile phone industry is being reborn as an industry that is fair, honest, and healthy for its users. We asked Shunichi Kita of NRI, who has been promoting reforms for more than 10 years, about the current situation and true meaning behind these reforms.

The mobile phone industry ignored the wishes of users

Up until a few years ago, it was normal to see smartphones and mobile phones being sold practically for free or with hundreds of dollars’ worth of cash-back offers. However, such excessive discounts have recently disappeared. This is of little wonder, as the Ministry of Internal Affairs and Communications implemented a policy prohibiting major mobile phone carriers from selling mobile phones for practically zero yen in 2016.

Shunichi Kita of NRI promoted this policy as a member of the "Task Force on Mobile Phone Charges and Other Service Conditions" at the Ministry of Internal Affairs and Communications. He also made efforts to formulate "Guidelines for Optimization of Purchase Subsidies for Smartphone Terminals" and revise the Telecommunications Business Act regarding consumer protection rules, in order to deter phone sales with excessive discounts. Why did Kita become involved in the formulation of such policies?

The peak of these cash-back deals was in fiscal year 2014. Companies offered abnormal discounts such as refunds of one million yen for a family that agreed to change their carrier.

"Normally it is better for carriers if their customers continue to use their phones. This is because they will not have to pay for the phone cost discount. However, mobile phone dealers received commission revenue when customers change phones, so they encouraged customers to buy new phones even if they did not feel the need. This creates a gulf between the needs of the carrier and the dealer, and customer wishes are ignored. This very unhealthy and insincere situation continued until recently."

Kita says it was in 2007 that he felt misgivings about the future of the industry because it seemed it would only get worse and realized the necessity of reforms.

"I had pointed out the harm caused by the discount price war for more than 10 years. Although I thought it would settle down at some point, this was not the case at all. The mobile phone industry was already in the mature stage where everyone already owns a phone. Carriers should have been focusing on added-value services to encourage their customers to use their phones, but the industry was stuck with the sales model from the growth period and trapped in a discount war. Even though the carriers realized this problem, they were unable to cease the price war. This further damaged the industry and its reputation. That is why it was necessary for us to formulate guidelines for rectifying the discount war and revise the Telecommunications Business Act."

A plea from a shop manager

For 25 years, Kita has worked in surveying and consulting for the ICT (information communication technology) industry, which includes mobile phones. At first, he focused on how to popularize new technologies and services and how to beat the competition.

"However from around 2006, I started to question this stance. I realized that the mobile phone industry that I had grown with was no longer appealing to the people working in it. In particular, sales locations were exhausted. I started to think that we had to focus more on the people that use and sell the phones."

One of the major influences on Kita was the day that the female manager of a mobile phone shop told him "I want you to change the industry into one that I am proud to work in" after he had just finished giving a presentation.

"Up until that point, I had only focused on the people that create and promote sales of new mobile phones and services, and I had not sincerely thought about the people selling them. However, about 100,000 people work at customer contact points in the mobile phone industry. I found myself wanting to transform the industry to enable those people to take pride in their job and thereby also make their customers happy, and started implementing this idea in my consultation work. To put it simply, I wanted to make the industry and its companies places where people would want their own sons and daughters to work." 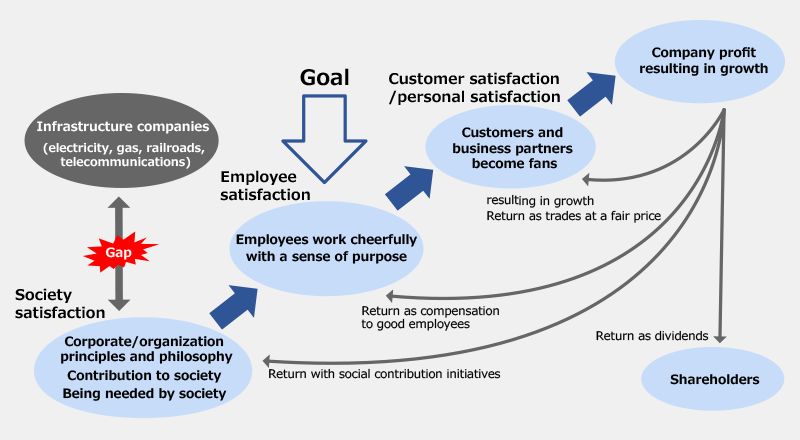 Human resources are the key to differentiation

Kita visits mobile phone shops over Japan on a monthly basis to communicate with owners and sales staff. "There are many dealers that are valuable to their customers and provide excellent services via initiatives such as increasing product knowledge at regular study sessions, proposing services that customers really need, and helping customers use their phone after purchase," says Kita.

"The reason why I believe that salespeople are important is because sales sites are customer contact points that enable the true value of products and services to be conveyed to the customer, which is an important way of differentiating from competitors, not only in the mobile phone industry. With the globalization and seamless integration provided by the popularization of ICT, no matter what excellent products and services a company provides, it is easy for its competitors to copy them and catch up. What cannot be easily copied and caught up with is services that depend on sincere and reliable human resources.

It takes time to cultivate such human resources and they require an environment that truly allows them to work with pride. Creating systems and organizations that enable sincere people to gather together, grow together, and work enthusiastically will be extremely important in every industry in the future. Human resources are the most important management resource of companies. I make sure to incorporate this idea in strategies when I provide consulting assistance."