In Japan from January 2017, the range of people qualified for joining the individual-type defined contribution pension plan ("iDeCo") has greatly expanded. It is expected to be a promising system for supporting individual asset formation. NRI conducted a survey regarding the iDeCo system in October 2016. In this article, Hisashi Kaneko of NRI, who was in charge of the survey, sheds light on the key to popularizing iDeCo by surveying awareness of the system.

Have you heard of iDeCo? It is an individual-type defined contribution pension plan. Let us take a quick look at the pension systems of Japan.
The pension systems of Japan can be broadly divided into public pension (national pension and welfare pension) and private pension that complements the public pension. Private pension can also be further divided into pension paid by a company as part of employee benefits and pension joined voluntarily by an individual, and iDeCo belongs to the latter category.

From January 2017, the individual-type defined contribution pension plan system was revised to enable anybody under the age of 60 to join. Public servants, housewives, and employees with a company pension can all join. The system is expected to become a promising method for individual asset formation due to advantages such as all premium contributions being income tax deductible and tax exemptions for profit such as interest that accrues during the operation period.

In October 2016, NRI conducted an Internet survey on iDeCo to find out whether the system would actually become popularized and whether it would help individual asset formation. The survey targeted 18,000 men and women of various occupations between the ages of 25 and 60.

First of all, iDeCo was not well known compared to other asset formation systems such as property accumulation savings and NISA, and many women and younger people said that they had never heard of it. There were also few people who knew that the range of people qualified for iDeCo had increased, and the respondents had not even received an explanation about iDeCo at their financial institution.

Despite this, more than 20% of people who received an explanation about iDeCo for the survey expressed interest in joining. In particular, people with investment experience and interest in investment tended to want to join the system.
In regard to monthly premiums, public servants and company employees who wanted to join iDeCo said they would pay an average of about 10,000 yen monthly, and self-employed respondents said they would pay more than 15,000 yen monthly. Many of those public servants and company employees said they would pay out of their own salary and many of those self-employed respondents said they would pay out of their own savings.
When we asked respondents who did not want to join the system their reason, the most common was "Because I have no free money to contribute," followed by "Because the application procedure seems convoluted," "Because I have no one to ask for advice," "Because of the account management fees," and "Because I cannot leave the system until I turn 60," amongst other answers.

After financial reasons, many people answered the difficulty of using the system (the convoluted procedure, the account management fees, and the inability to leave the system early) as their reason. 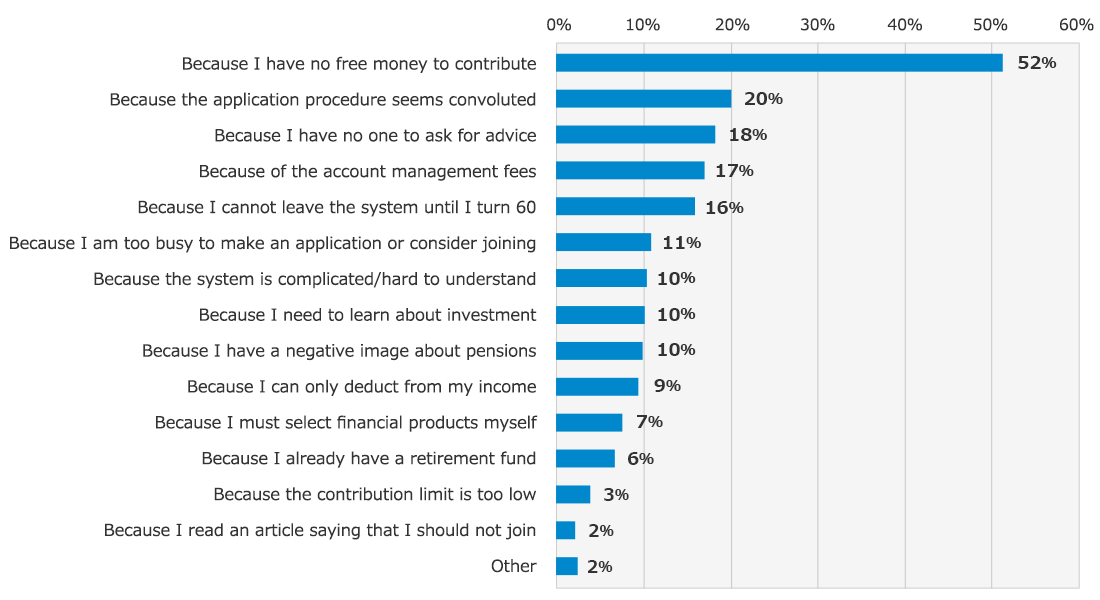 Active efforts from financial institutions are essential for popularization

Based on the results of this survey, Hisashi Kaneko of NRI identifies three problems facing the popularization of iDeCo. The first problem is the lack of media exposure and the passive approach of financial institutions. "Currently, it is prohibited for people to engage in both sales of financial products and management of defined contribution pensions. If this restriction gets relaxed, financial institutions could use many of their sales representatives to solicit customers to join iDeCo," says Kaneko.

Popularization could lead to monthly contributions of 85.9 billion yen

If these problems are solved and iDeCo becomes popularized, Kaneko calculates that the system could have 8,460,000 members in the future, with monthly contributions totaling 85.9 billion yen. He also hopes that the popularization of iDeCo can provide members with an opportunity to learn about investment and increase individual financial literacy.