Overcoming a fear of AI to achieve "AI for your life"

Artificial intelligence (AI) is being utilized in various fields, from robots that greet visitors in a store to mobile phones that answer questions, and AI to propose treatment plans at medical institutions. However, some people feel that AI is unrealistic or feel uneasy about AI because they feel it might cost them their jobs. What are the issues that must be overcome for AI to become truly prevalent in society?

Rethinking the role of AI

When some people think about AI, they think about it does some jobs more efficiently than human beings and taking people's jobs. However, the true role of AI is to support people in making decisions and taking action. It is necessary for people to realize that humans will make the final decisions and utilize AI as a tool to improve all of society.

Adoption of AI requires medium to long-term planning, data linking, and thinking from the user's perspective

Many companies have been investigating and adopting the use of AI in Japan, but there are few examples of AI becoming prevalent in society. In many cases, AI technology is not adopted because the company cannot decide how to use it in concrete terms, or the project gets delayed at the stage of accumulating data or implementing improvements for end users.

The reason why AI is not adopted is often because of the method used. Since many companies are individually working on how to utilize AI, their adoption policy is often biased towards the respective company. Even if testing is successful, the service may be refused by the users when comes the time to release it to society. What the company should do is think about what kind of AI is needed from the perspective of their users. There is also a limit to what can be developed and released by a single company. AI uses machine learning to process a large amount of information and thereby enable more precise choices to be provided to people. For example, using AI to drive cars requires information not only about the cars themselves, but also various other information regarding insurance, road/traffic, etc. However, various industries need to link together in order to collect such a vast amount of data, and lack of cooperation can affect the adoption of AI. Focusing on short-term return on investment can also make it difficult to perform medium to long-term investments that look into the future. 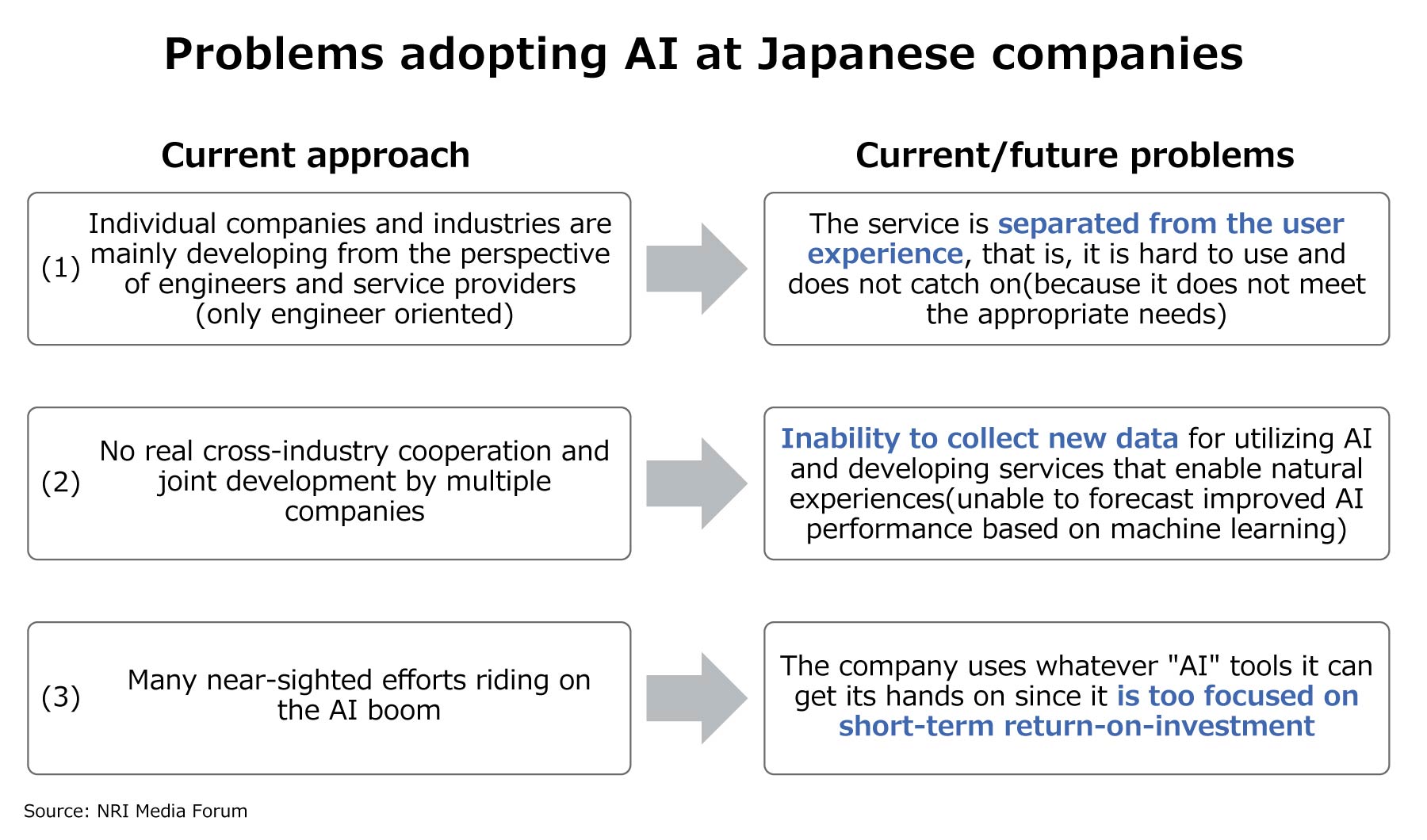 AI for your life

NRI conducts surveys and research into a society where AI is prevalent together with the Artificial Intelligence Research Center (AIRC) of the National Institute of Advanced Industrial Science and Technology (AIST). That has led us to create a concept video that introduces how AI will impact our day-to-day lives, which has been released by AIST.

In the near future, AI will support all aspects of our lives

The concept video depicts how AI supports the daily life of a family in the year 2023. For example, when a child has a fever, the AI will recommend a babysitter upon checking the spread of infection and the impact that taking a day off from preschool would have. The parents then decide whether to let their child take a day off and which babysitter to call, based on the information provided by the AI. The movie makes it clear that the final decision is in the hands of humans and that AI simply supports that decision-making process. The video also depicts AI being utilized in various situations such as shopping, home delivery, beauty salon, and travel services.

The AI market will be worth tens of trillions of yen

According to a survey by NRI, the markets for the lifestyle services that appeared in the above video is currently worth about 80 trillion yen. New businesses will be created in these markets as AI technologies are adopted.

Table: Market totals of the services that appear in the concept movie 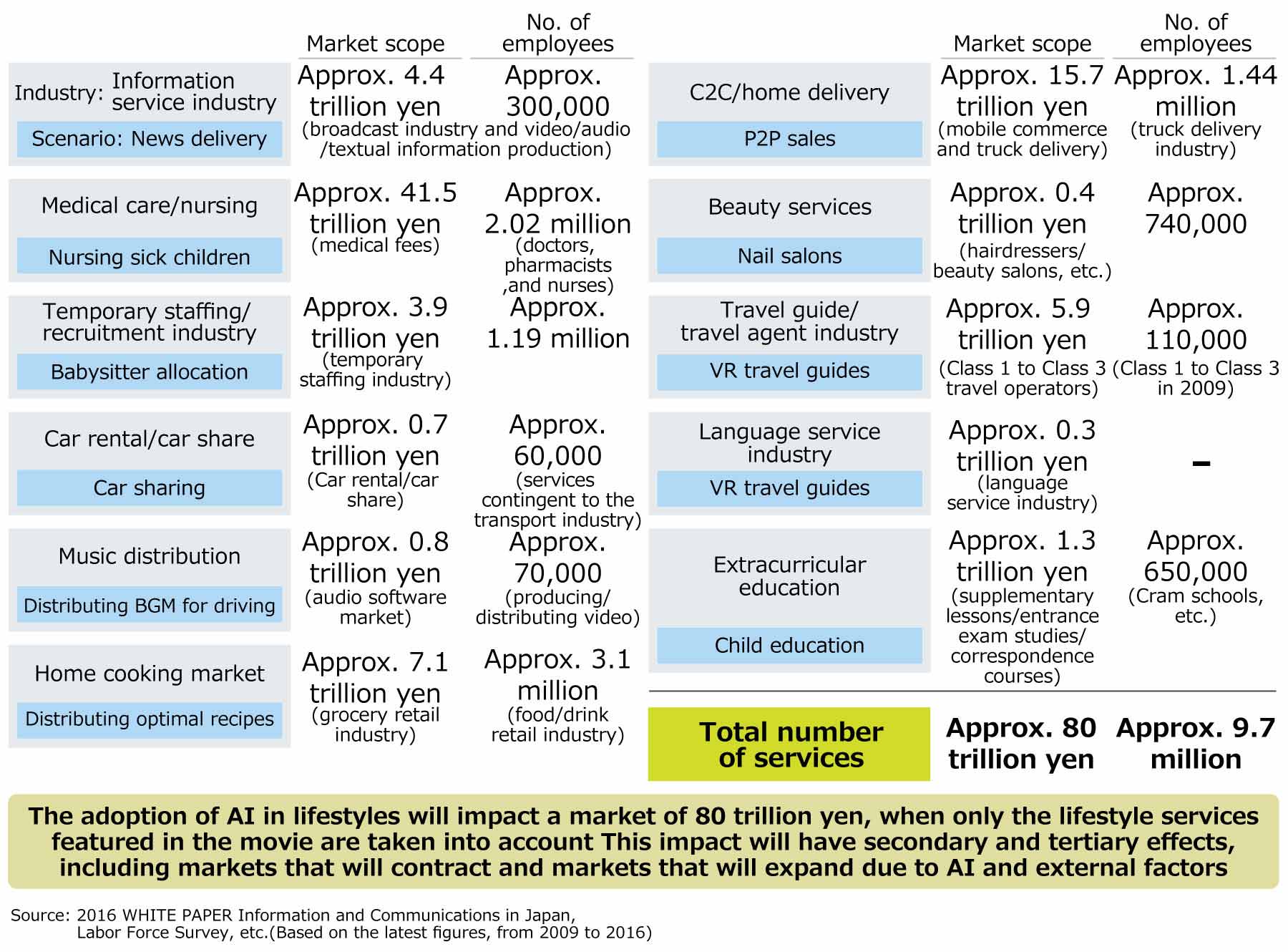 A new market worth tens of trillion yen may also be created by adopting AI and cooperating with the private sector in fields that have been traditionally performed by government, such as nursing and childcare.

As such cross-industry initiatives gain traction, AI will support all aspects of people's lives, and this will not only lead to lifestyle convenience, but will also create a society where importance is placed on the relationships between individual people.