HOME NRI JOURNAL On the digitalization of Japanese companies: From the results of 2016 "Survey on the Status of IT Use in User Companies" Part 1

On the digitalization of Japanese companies: From the results of 2016 "Survey on the Status of IT Use in User Companies" Part 1

Nomura Research Institute (NRI) has been conducting the "Survey on the Status of IT Use in User Companies" targeting executives in the position of chief information officer (CIO) or equivalent positions at Japanese companies with top domestic sales. Unlike conventional computerization, which focuses on business process reforms, today's digitalization puts emphasis on the products and services that make up core businesses, by promoting progress in information technologies like big data analytics, artificial intelligence (AI) and the Internet of things (IoT). The 2016 survey illuminated the state of systems for promoting digitalization implemented at Japanese companies.

Only 10% of companies appoint officers specifically for digitalization, and 70% of those positions are concurrently held by the CIO

In the survey conducted by NRI, we asked about the appointment of an officer in charge of promoting digitalization (CDO, CTO, etc.), and only 10.8% of the companies said they have such a position. Furthermore, 72.5% out of that 10.8% said the CIO concurrently holds the position (7.9% of the entire sample). Only 2.8% of the entire sample have a separate person (not the CIO) in the position, and only 1.1% (5 out of 471 companies in the survey) have a dedicated executive in the position. 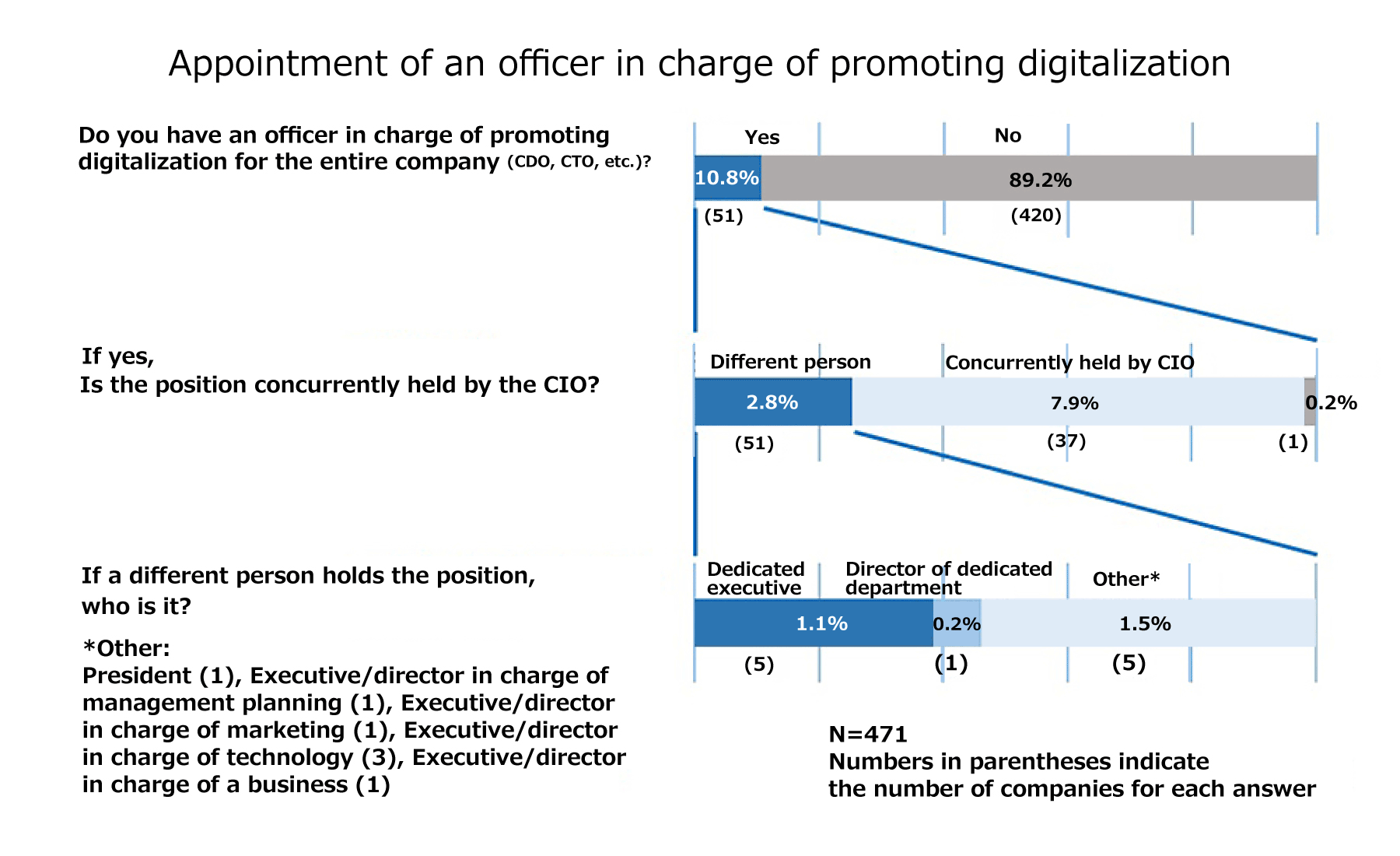 Companies must accelerate the shift to digitalization

To companies in which the CIO is also in charge of digitalization, we asked about time spent on digitalization work. The average was a meager 16.9% (N=30), which means there is a large bias towards conventional computerization in comparison to digitalization.

Computerization concerns optimization and regulation, while digitalization emphasizes product strategy and services strategy. This means that computerization and digitalization differ in their approach to goal setting, evaluations, human resources, partnerships and much more. The advantage of appointing a CDO or similar position in the executive class is that it enables promoting digitalization with a view on business strategy, without being held back by the conventional ideas of computerization. If a CIO takes this position, it is crucial that more weight is given to digitalization.

Link to Part 2 of the Article

What is the role of the IT department in an era of digitalization? From the results of 2016 "Survey on the Status of IT Use in User Companies" Part 2