How rural cities in Japan can connect globally as rural hubs

Japan's population is declining at an accelerated pace, and if we want to maintain our economic vitality, it is imperative to immediately improve productivity in metropolitan as well as rural regions. Furthermore, in place of Japan's traditional economy based on domestic activities, we need to gather people, capital and expertise from around the world to create new industries, and learn to leverage them in the development of our cities.

Rural hubs that do not rely on big cities

The revitalization of rural regions is a current hot topic across Japan due to the falling population and intense centralization of Tokyo. The only places in Japan with high regional value added per person are Tokyo and a few "business castle towns" (cities where the industry is dominated by one or a few companies and their affiliates/partners). Rural cities typically rely on big cities—they supply them with human resources and in turn gain economic and financial support.

If we take a look outside of Japan, however, Germany has many rural cities that surpass big cities in gross regional product (GRP) per person. Some well-known examples are Regensburg and Erlangen. These cities welcome bases of major companies and establish collaborative relationships with small and medium enterprises. They utilize high-quality human resources and the advanced research findings of universities and research institutions to do business with the world and earn foreign money.

Kobayashi says, "To become rural hubs that are independent from big cities, cultivate human resources and companies within their region, compete on an equal footing with big cities, and connect with the world with their own uniqueness—that is one ideal vision for rural cities in Japan."

A culture, foundation and environment that generate industry

Kobayashi believes that the requirements to becoming a rural hub include: a major company to create a foundation for the generation of business and startups, a university or research institute to produce high-quality human resources, and measures from the local government to promote entrepreneurship and innovation.

Moreover, in order to attract and retain high-quality human resources, the city needs a tolerant culture that welcomes diversity, and an attractive city environment that is comfortable to live in.

Cities that satisfy these conditions will retain high-quality human resources instead of relinquishing them to megaregions (metropolitan regions), thus increasing the potential for new business and startups. Cities that are loved by people will attract companies, making them rural hubs that generate new industries and grow economically. 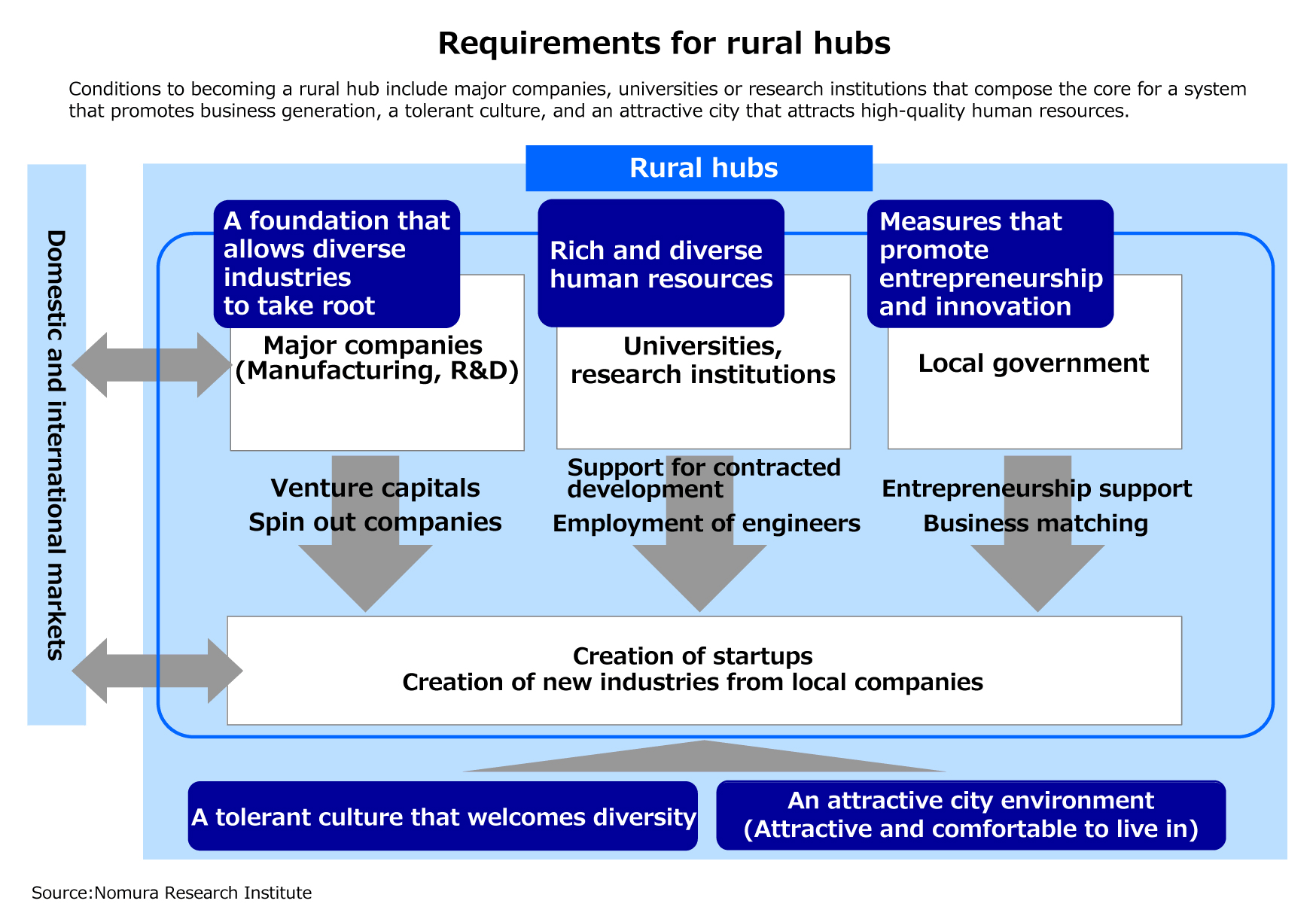 Harima says, "When creating the Growth Potential City Ranking, in addition to collecting and analyzing statistical data, we conducted an online survey to citizens of each city to quantify emotional factors that cannot be gauged from statistics alone. We selected 100 cities based on population size and other factors, and evaluated their industry-generating ability according to 3 categories, 6 focuses and 131 indices."

Many rural cities in Japan have great potential

These indices were used to create 12 rankings: one ranking for overall industry-generating ability and additional rankings based on the different industry-generating focus points and lifestyles. As a result, many cities other than the three main metropolitan areas emerged as having great potential to become rural hubs. Specifically, Fukuoka City, Kagoshima City, Tsukuba City, Matsuyama City and Kurume City ranked high in the Growth Potential City Ranking results.

Ranking number one, Fukuoka City has a good business environment, a population that welcomes diversity, a culture of taking on new challenges, industry-academia collaborative research, and other conditions required for industry generation. In the past, Fukuoka City's weakness was its small number of major companies, and it was said to have a "branch office economy." However, it has the potential to become a rural hub by advertising its attractive business environment, inviting companies from outside the city, and supporting business generation within the region.

Up to 40 cities placed in the top 10 spots of the various rankings. The unique characteristics of each city were also revealed, such as Kagoshima City's tolerance to new citizens and good balance of convenience and nature, Tsukuba City as a good place for entrepreneurs, and Matsumoto City as a great place for working mothers. Harima says, "Creating a visualization of the strengths of rural cities showed great potential in many cities that, at first glance, may seem lacking in terms of industry generation. I hope to see them take these results and proceed with industry revitalization."

Kobayashi also made this suggestion: "Cultivating diverse rural hubs that leverage their strengths will lead not only to rural regeneration but also growth for the entire country. Japan should make effective and efficient investments through focused selection based on each city's strength and growth potential."