HOME NRI JOURNAL What is the role of the IT department in an era of digitalization? From the results of 2016 "Survey on the Status of IT Use in User Companies" Part 2

What is the role of the IT department in an era of digitalization? From the results of 2016 "Survey on the Status of IT Use in User Companies" Part 2

IT departments have been in charge of leading their company's computerization thus far. The 2016 survey results shed light on changes in the role and relationship of the IT department. Part 1 looked at who should be in charge of digitalization in relation to products, services and customer experiences. Part 2 looks at what changes are necessary to promote digitalization, including those made to the organization and its systems, with an understanding of the company's performance and the state of the IT department.

Companies enthusiastic about digitalization tend to have high profitability 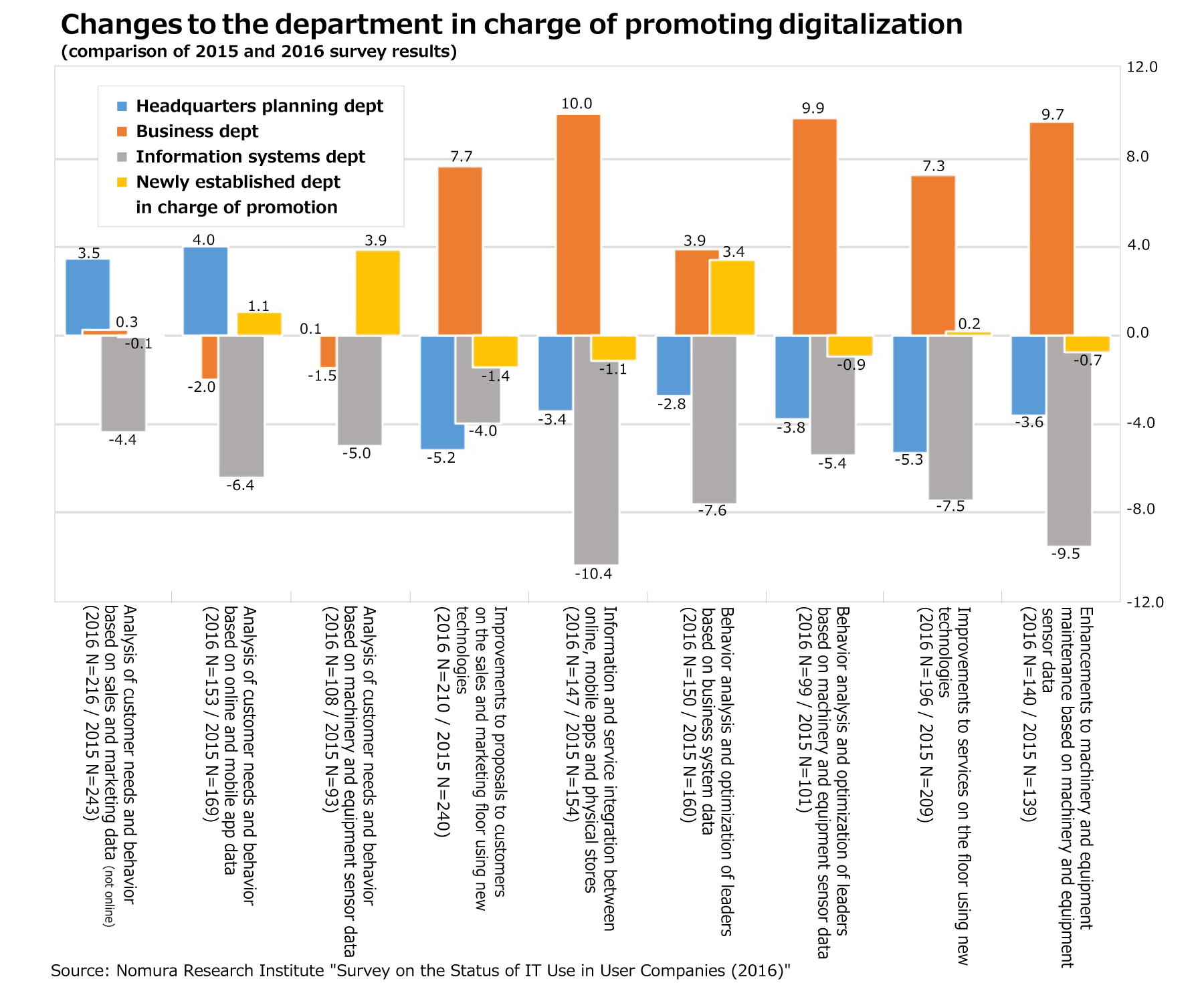 Computerization and digitalization differ in technology and development style

Conventional computerization focuses on organizing the company's business processes, aggregating diverse information, and putting them into an easy-to-read format for managers. Digitalization involves making predictions from statistical analyses and automated decisions with artificial intelligence. On the technical side, data is diversifying to include not only numbers but also images and text. On the business side, companies must look not only at how their business processes are performed, but also at how they must change their products, services and customer relations based on their business strategy.

This changes the work style of the IT leader. Conventionally the waterfall methodology was used—they would draft the overall design, break it down into individual parts to be programmed, put together the various parts, and test it. These days the demand is for agile development—they perform the programming as quickly as possible, test them on site, and make changes accordingly.

Management teams need to recognize the importance of digitalization and invest human and management resources into it. That is, with optimization and streamlining of business processes, you could get results by repeated improvements based on decisions at the gemba (scene). However, with digitalization, this method sometimes fails.

Moreover, companies must not forget to identify human resources in the current IT department with an affinity for and skills applicable to new fields, and also consciously re-train employees. It is important to voluntarily learn about new technologies and new ways to handle data, but more than that, companies must cultivate their ability to turn business problems into analytical problems. In addition to large pyramid-model organizations where workers accomplish the tasks they are given, we expect to see more opportunities for small teams working directly with related departments. In this age of digitalization, IT leaders with a good business sense will see their range of work broaden.

Link to Part 1 of the Article

On the digitalization of Japanese companies: From the results of 2016 "Survey on the Status of IT Use in User Companies" Part 1