More and more space-related news seem to pop up these days, including the launch of quasi-zenith satellite* Michibiki by the Japan Aerospace Exploration Agency (JAXA) and rocket developments by venture capital companies. Globally, we are seeing a shift from space development as a national project to space business driven by the private sector. We met with Masashi Sato of the ICT & Media Industry Consulting Department, who has long been involved in developing and supporting the space industry, to talk about the newest trends in the field.

The global trend is in the private sector-driven model

――What exactly does one do in the space business?

The space business can be separated into three categories. One is the on-ground business, which includes rocket launches and the use and application of satellites. The second is the space environment business, which consists in offering space traveling for passengers, conducting experiments and manufacturing in the microgravity environment of outer space. And then there is the astronomical business that searches for resources such as rare metals.

The on-ground business gets the most attention today. This business involves the use of communication satellites for satellite broadcasting, remote sensing satellites for filming and observing the earth with cameras and other devices, and location tracking satellites, which were critical in the global success of the Pokémon GO game.

The location tracking satellite Michibiki, which made news in Japan, follows the conventional business model—it was launched by the government but private companies offered the services. The U.S., however, is leading a shift to a business model where private companies launch communications and remote sensing satellites, and conduct everything from infrastructure maintenance to offering services. 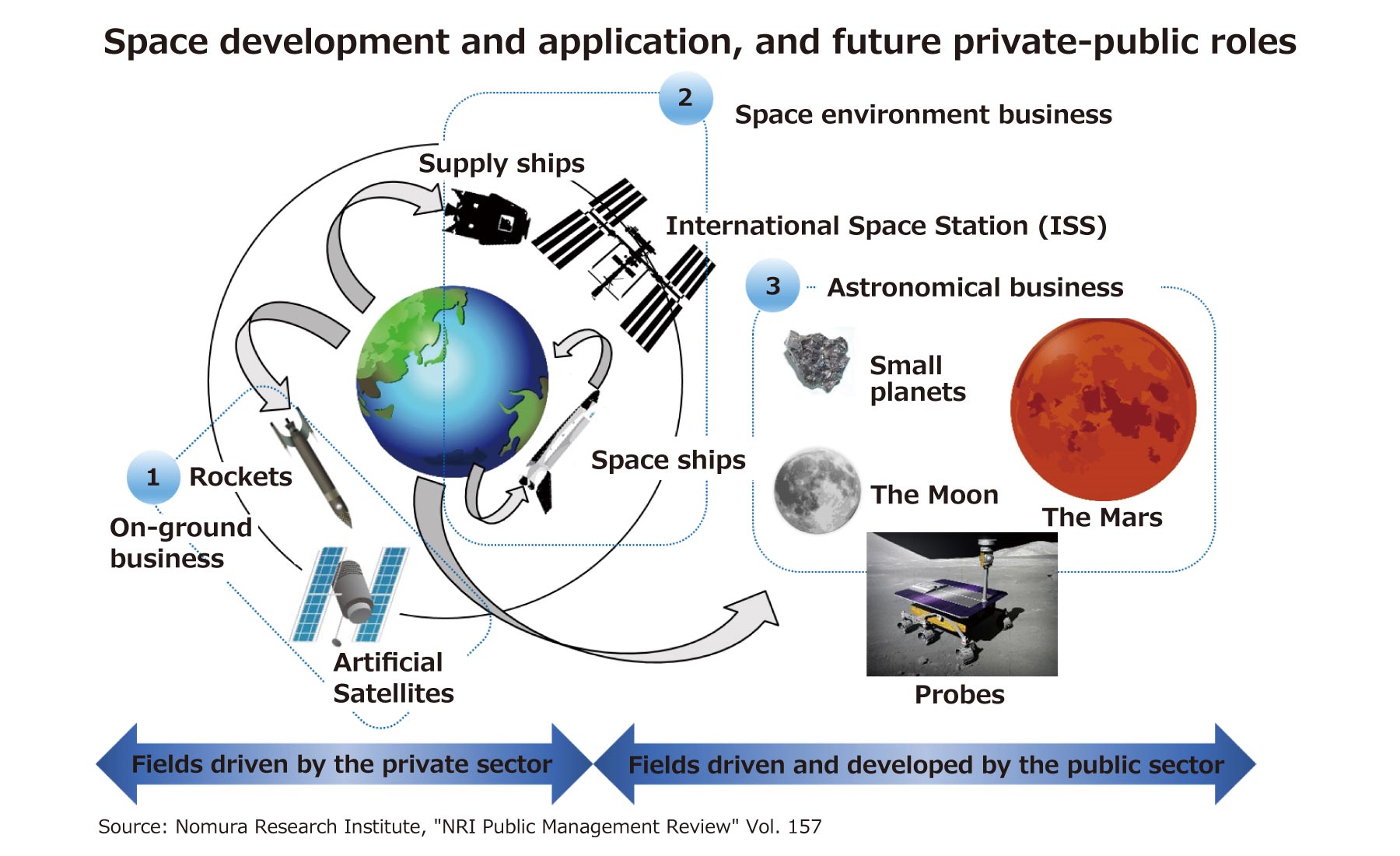 ――Why is it easier for private companies to join the market?

Because rockets and satellites are smaller and cheaper. In the past, a single satellite could weigh anywhere between several hundred kilograms to several tons, and require tens of billions of yen from production to launch. With innovation, we are now able to launch small satellites weighing several dozen to several hundred kilograms, with costs in the one hundred million yen range. Advances to semiconductors and general machinery have been huge, and some venture capital companies even say, "Most of the parts can be purchased on Amazon.com." Expertise and technology in the fields of computer sciences and mechanical engineering can be applied, so even people without space industry experience can give it a try.

――We may hear more stories similar to the Japanese TV series, Downtown Rocket.

Downtown Rocket was about a small factory supplying parts to a major company. In the U.S., we are even seeing some examples of major companies and venture capital companies swapping roles completely. For example, OneWeb is a communications satellite venture capital company in the U.S. that pushes the business concept of a global communications infrastructure equivalent to 5G by launching 700 satellites. They will be collaborating with aircraft manufacturer Airbus for the design and production of the 700 satellites. Even with a good concept and solid technology, a venture capital company by itself cannot manufacture several hundred satellites in a short period of time. So they are getting help from a major company to achieve their goals.

\In correspondence to such trends in Europe and the U.S., we are seeing more and more space-related venture capital companies come forth in Japan. For example, Interstellar Technologies, founded by Takafumi Horie, is a completely privately owned space development company aspiring to launch a lot of small satellites and expand the application of small satellites, while engaging the entertainment and other industries.

Keywords are "AI" and "Collaborations with other industries"

―― For the future development of the space business, what technologies are particularly notable?

I think AI technology is the most applicable. The potential is in the management of rocket production lines, launch and control of satellites, analysis of acquired information, and more.

If conventional rockets were super-high performance sports cars, the current demand would be for mass produced cars. AI technology can help manage, automate, unman and optimize the production line, and this is good news for venture capital companies that lack manpower. In the satellite field, some companies are making efforts to safely and securely operate and manage the control room with fewer people, instead of dozens of people, with automated launches and control.

AI technology can also be used in data analysis. Right now, satellite images are acquired between one to several times a day, and the images are all archived. AI technology can be applied to big data analysis. For example, if you create an image recognition algorithm for identifying a car and apply it to globally acquired data, you can assess the traffic volume and density of any place in the world. This can be a big business opportunity.

――The range of application is very wide.

Orbital Insight is a venture capital company in Silicon Valley. They use remote sensing images and offer services to the financial, agricultural, logistics, marine transportation and retail industries. Analyses of diverse global data, including automobile, agricultural crops, ships and oil tanks, can be useful in financial transactions and marketing strategies. In that sense, the key is how to uncover or develop collaborations between the space industry and other industries. Japan is an economic superpower, ranking third in the world, so there are many fields in which synergy is possible. So many different industries are full of latent potential.

Link to article on Part 2

Can Japanese companies utilize their strengths? The changing face of outer space development and the expanding outer space business (part 2)