The phrase "Goldilocks economy"—also known as "Goldilocks market"—has become common in recent days. This may be due to an increase in optimism in financial markets, but based on his past experience, the author feels that this phrase has an unpleasant nuance.

The word "Goldilocks" was also often used to describe the optimistic mood before the global financial crisis. This was due to strong expectations that a stable economic/financial environment would continue for an extremely long time, despite the United States’ real estate market, household debt, and financial services actually being distorted. This led to a historic large-scale adjustment of the economic and financial world, such as the subprime mortgage crisis in 2007 and the global financial crisis in 2008. If the word "Goldilocks" and the excessive optimism had not spread throughout the economy, the capital and financial markets, and more people had maintained a warier stance, I believe that the subsequent readjustment may not have been so severe.

Let us take a look at by the Japanese article database Nikkei Telecom how frequently the word "Goldilocks," which reflects increased optimism in financial markets, was actually used (see the figure). The figure indicates that its frequency rapidly increased in 2006, and reached its peak in the first half of 2007, which was just before the subprime mortgage crisis became fully apparent with the BNP Paribas shock in August 2007. There were 31 searches at that time.

The first time that this peak was exceeded was in the first half of 2017, when there were 52 searches. The number of searches then further accelerated and reached 72 in a mere three months from July to September 2017. This number would be 144 when converted to a six-monthly figure, which shows just how rapidly the number of searches had increased.
Looking back on the experience before the global financial crisis, optimism in the financial market and economy may be slightly excessive due to increasing "Goldilocks" expectations, which means there may be readjustment soon. 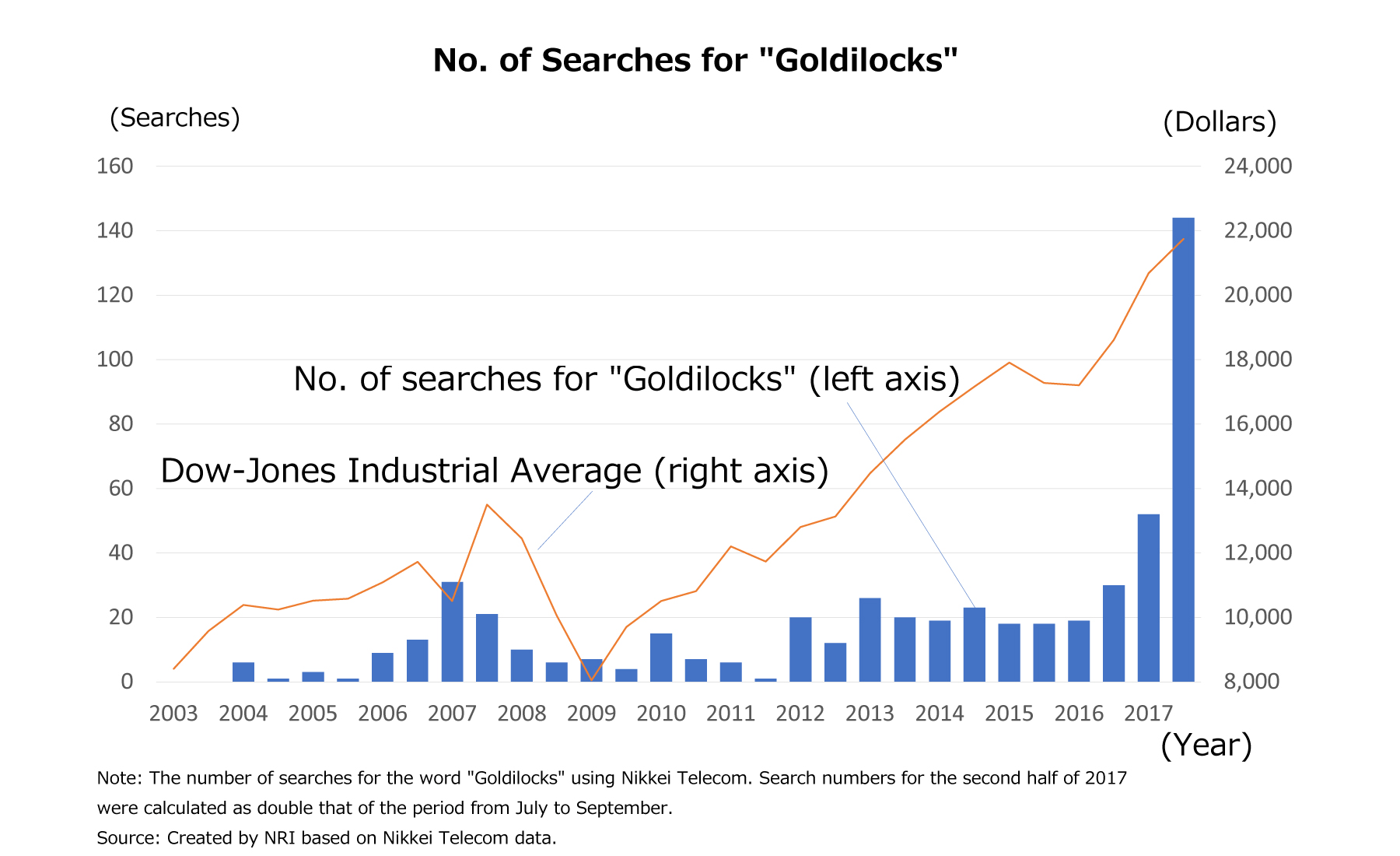 If a Goldilocks economy means that the economy is not too strong and not too weak, then why does it lead to strong optimism? This may be because it is related to the forecast of financial policies.
When economic recovery is maintained and the risk of inflation becomes apparent, a central bank implements normalization policies to reduce monetary relaxation. This generally makes the financial market wary about the long-term interest rate hikes or economic slowdowns that restrictive monetary policies or reduction in monetary relaxation can bring. However, in a Goldilocks economy, if the risk of inflation is limited, expectations that the pace of reduced monetary relaxation or the pace of monetary tightening may be less severe than the initially expected increase. As a result, fears about long-term interest rate hikes or economic slowdown also become relaxed and optimism strengthens. A reduction in economic vitality, such as potential growth, may lead to a Goldilocks economy, but this seems somewhat ironic considering that it strengthens optimism in the financial market.

In actuality, the last time that search results for "Goldilocks" started to show a remarkable increase was in the first half of 2006, and it was in June 2004 that the policy interest rate started to increase. This time, the policy interest rate started to increase in December 2015 (so-called "tapering," or reducing the pace of asset purchases started in January 2014), and search results started to show a remarkable increase in the second half of 2016. Based on past experience, the recent rapid increase in searches for "Goldilocks" may indicate that we should switch from viewing the financial market as stable to starting to look at the situation with more care.