HOME NRI JOURNAL The potential and security of blockchains

The potential and security of blockchains

There are great hopes for using blockchain technology to enable "smart contracts"※ that automate the processing of contracts, but there are also increasing concerns about security risks. We asked Teruhiro Tagomori of NRI SecureTechnologies about what specific risks there are.

The great potential of blockchains and smart contracts

The blockchain technology that supports the popular Bitcoin virtual currency has been gaining attention. This technology is a system that uses encryption and distributed networks to distribute and record information in a format that prevents modification, and is also referred to as distributed ledger technology.

Blockchains are a versatile technology that can be applied in a wide range of fields. Mr. Tagomori gives swap deals as one example of a technology where blockchains can be utilized.

A smart contract is a program executed on a blockchain. It enables the content defined in a contract to be described as a program that automatically executes that contract.

How should we confront smart contract vulnerabilities? 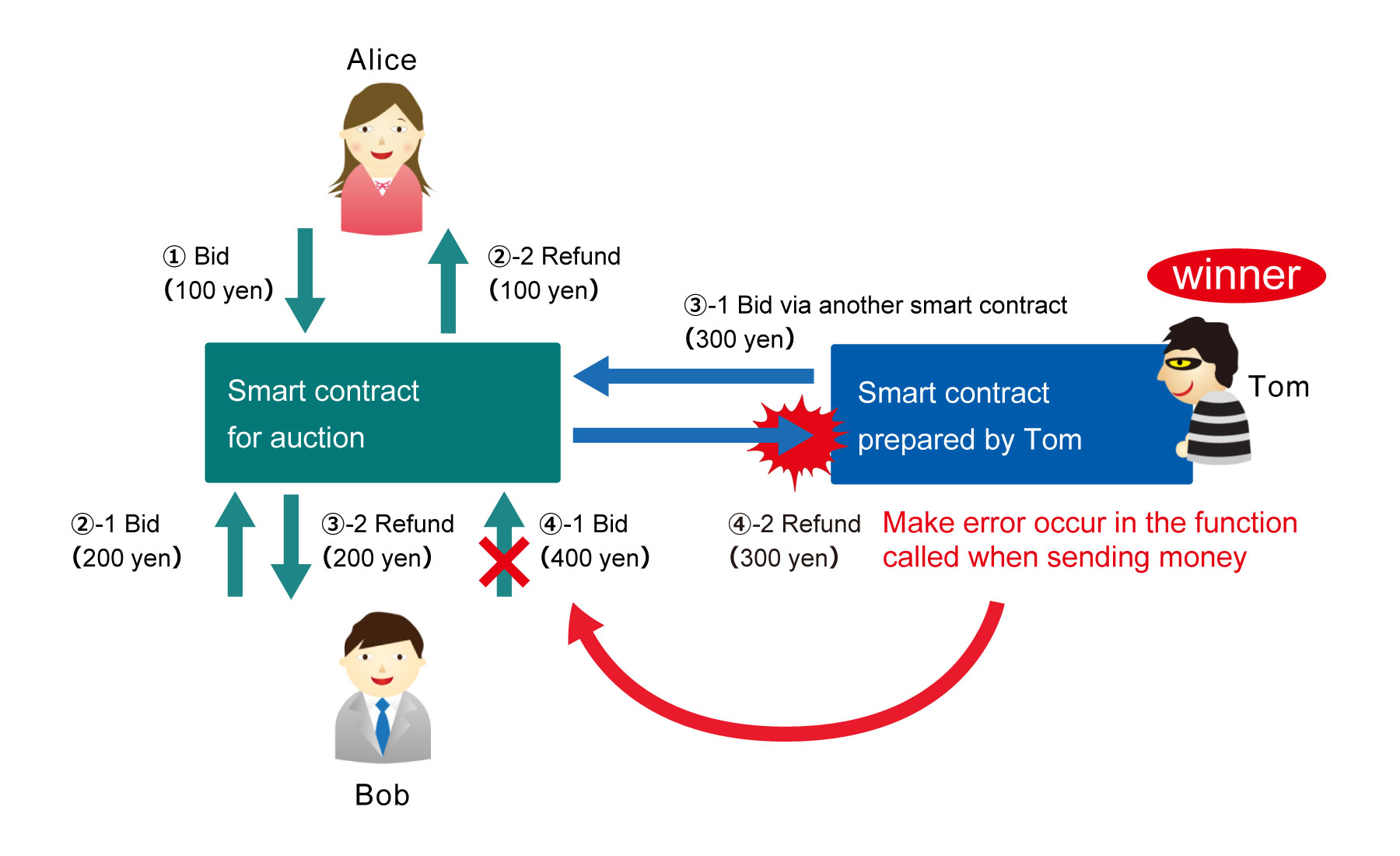 Where a problem can occur is when a bid is made via another smart contract. Let us say that Tom makes a bid worth 300 yen via a smart contract he prepared (3-1). 200 yen returns to Bob at this time (3-2). Let us say that Bob then makes a bid worth 400 yen (4-1). The money that Tom bid is attempted to be sent back to the smart contract prepared by Tom (4-2), but if the function in the smart contract that is called when sending money has a process that deliberately causes an error, Bob's bid will fail due to that error. In other words, no one else will be able to make a bid, and Tom will definitely win the auction. "When developing smart contract programs, the possibility of such vulnerabilities being inserted needs to be taken into account," says Mr. Tagomori.

"As I have mentioned, discovering a vulnerability in a blockchain may lead to perpetual attacks. That is why it can be effective to incorporate a protective measure like an emergency stop button that enables all reception of all processes to be stopped if a vulnerability is discovered. It is also useful to have a specialist with knowledge on security to check the source code when a smart contract program has been created."

Although smart contracts are a technology with a lot of potential, they also have the potential to cause a lot of damage due to attacks if a vulnerability is discovered. These risks must be considered when using smart contracts.