The reason that the government is strongly urging companies to raise wages is because the government and also national citizens do not believe that companies are distributing the results of growth to their labor force. However, the facts need to be looked at carefully. Only then can we seriously think about what kind of economic policies will truly contribute to stable lives and economic satisfaction.

The labor distribution rate, which indicates how much of the value generated by productive activities is distributed to labor, has been trending down in the long term in major industrial nations. However, the main reason for this is industrial structure sophistication. As the ratio of industries with a high capital intensity increases, industries become more sophisticated and the capital share increases, which naturally leads to a lower labor share.
Incidentally, the labor share in Japan since the early 2000s has been mostly stable on average (see the figure below). However, the talk of distribution being skewed towards companies increased compared to earlier times. This phenomenon is not unique to Japan: when the economic environment is relatively good, it is difficult for income disparity to become a large political/social problem, but the prolonged economic downturn since the global financial crisis (the Lehman Shock) led to a global interest regarding this problem. For example, the Occupy Wall Street demonstration in 2011 featured slogans such as “We are the 99%,” and increased global criticism of the growing disparity that the financial industry produces. The best-seller Capital in the Twenty-First Century published by Thomas Piketty in 2013 also drew large attention to the problem of income inequality.
However, when the people feel unsatisfied about the economy, there is a trend for people to shift the blame to the problem of income inequality, that is, saying that someone else is unjustly taking their income, or calling on the world to do so. Furthermore, it also facilitates the rise of political parties that excessively focus on the income inequality problem to try to gain the support of national citizens. 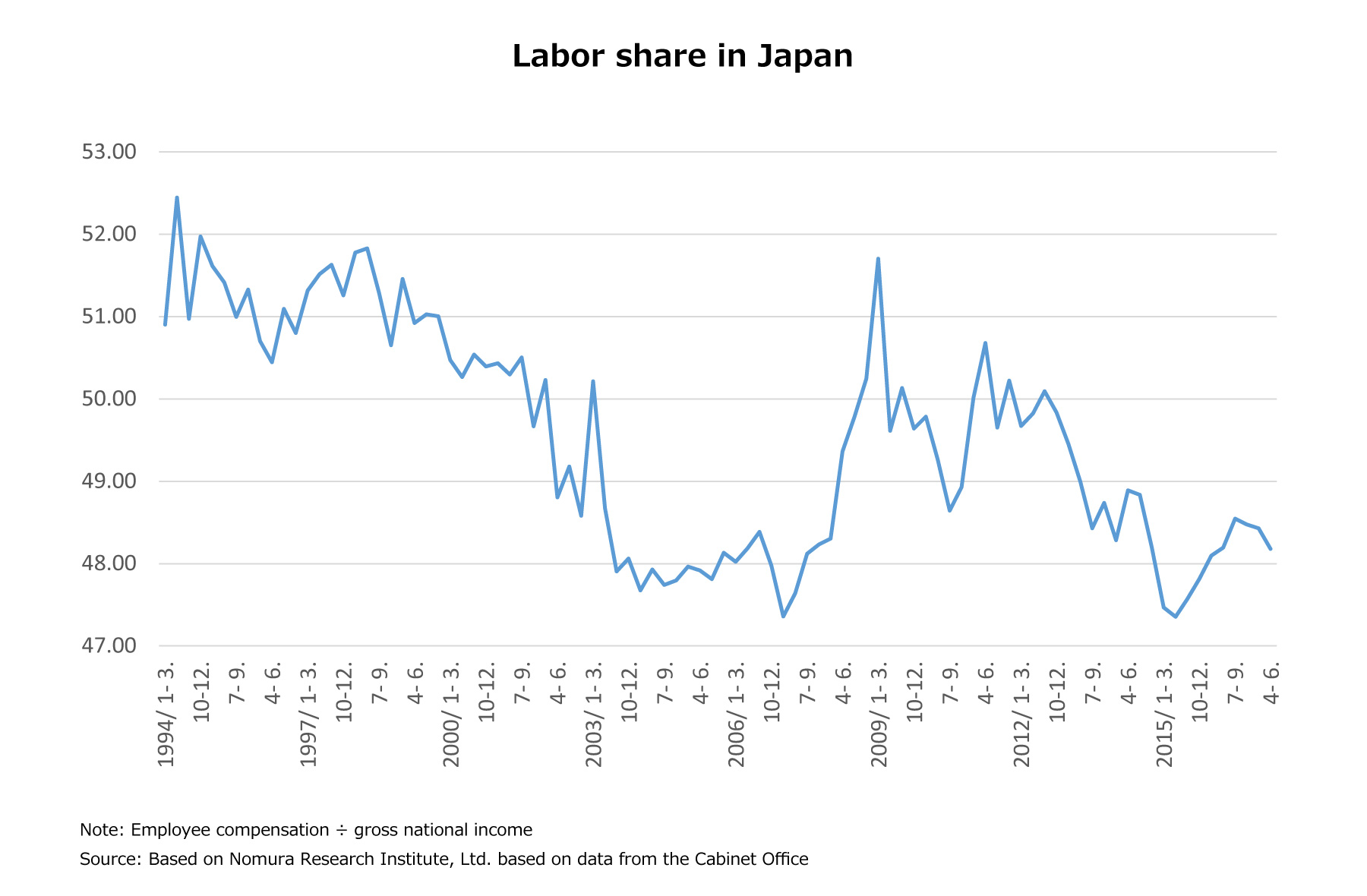 A historic pressure on the labor market in Japan

Incidentally, the active opening rate in Japan (the ratio of job offers to job hunters), which indicates the supply and demand in the labor market reached its highest level since 1974, with the latest figure at 152% in 2017. The labor market is a sellers’ market, and it can be said that the labor force does not currently need to worry about unemployment. From this point of view, the Japanese economy is in quite a good situation compared to other major industrial nations. If Japanese citizens are still not adequately satisfied in economic terms, that is not because they are worried about unemployment, but perhaps because they cannot paint a clear vision of their living standard improving in the future. The problem is not of distribution, but rather the potential of the economy.
The growth rate in real wages (nominal wages divided by the price index), which indicates purchasing power greatly affects the pace that the living standard of citizens will improve. Furthermore, the growth rate in real wages is in turn greatly affected by the growth rate in labor productivity.

This means that in order for people to feel increased economic satisfaction, we do not need to increase fiscal spending and monetary relaxation to decrease unemployment, or further increase pressure on the labor market to increase the growth rate in nominal wages. What is important is government policies increasing labor productivity and enhancing economic potential. If the expectation for medium to long-term corporate growth does not improve due to the low rate of increase in productivity, companies will remain cautious about raising wages to a level exceeding the price index (in other words, raising real wages), even if there is a severe labor shortage. If this environment does not change, companies will remain cautious about wage increases, no matter how much the government expects them.
What is important for increasing economic satisfaction is promoting corporate innovation or creating a system for sharing that innovation amongst the entire society. Also, improving the quality of labor via labor market reforms to increase willingness to work, occupational training, and reviews to education systems.
The government has already identified working style reforms, a revolution in human resources development, and a revolution in productivity as important economic policies. However, these initiatives need to be carefully implemented over an appropriate period of time in order to actually raise labor productivity and see changes in companies and family budgets. We can only hope that they are not simple temporary political topics.