It seems at first glance as if the 2018 world economy is off to a great start. At the very least, there seems to be nothing that would blindside the advanced economies, and many countries have also found themselves in a period of prolonged economic recovery.

The long-lived recovery of the world economy

Overheating as the cause of recession in the past

In the past, periods of economic recovery generally came to an end due to tight markets, which could shift the economy back into recession. Too much demand relative to supply leads to restrictions on the supply side, like shortage of workers and equipment, and impairs economic growth. Tight markets also drive up things like wages and inflation rates, and give rise to inflationary expectation. This was likely to trigger recession, as it would lead to increases in market interest rates and drive central banks to tighten their monetary policies.

In recent years, however, things like declining economic potential have decreased the likelihood of overheating. Wages and inflation rates tend not to increase too much, even when demand goes over a certain level. As such, the dramatic increases in market interest rate and rapid tightening of monetary policies that triggered recessions in the past are held at bay, and economic recovery periods tend to go on for longer than before. This kind of situation, known in the financial market as a Goldilocks economy (optimal market/economy that is just right—not cold, not hot) is one that tends to increase feelings of optimism amongst investors (“Takahide Kiuchi’s Analysis of Economic Trends—Evaluating the Goldilocks Economy,” October 13, 2017). This tendency can be seen most obviously in Japan.

The relatively small supply-demand gap in the West

This is, perhaps, because demand in the U.S. and Europe has not reached a level that would cause enough supply-side restrictions to impair growth. According to estimates by the OECD, the 2017 supply-demand gap ([actual real GDP – potential real GDP]/potential real GDP) in Japan was +0.9%, versus the negative numbers seen in the West, with -0.8% in the U.S., and -0.9% in the Eurozone (Chart 1). The U.S. and Europe thus still have room to grow.

The market in Japan, however, is tighter than those of Western countries, which means we are likely to see more supply-side restrictions. As such, Japan’s economic growth is likely to fall behind that of the U.S. and Europe in the future, with a tendency towards economic deterioration. On the other hand, however, the Japanese economy tends also to be very strongly affected by the state of the international economy. This means that the continued recovery of the U.S. and European economies will most likely prevent the Japanese economy from entering into recession on its own. 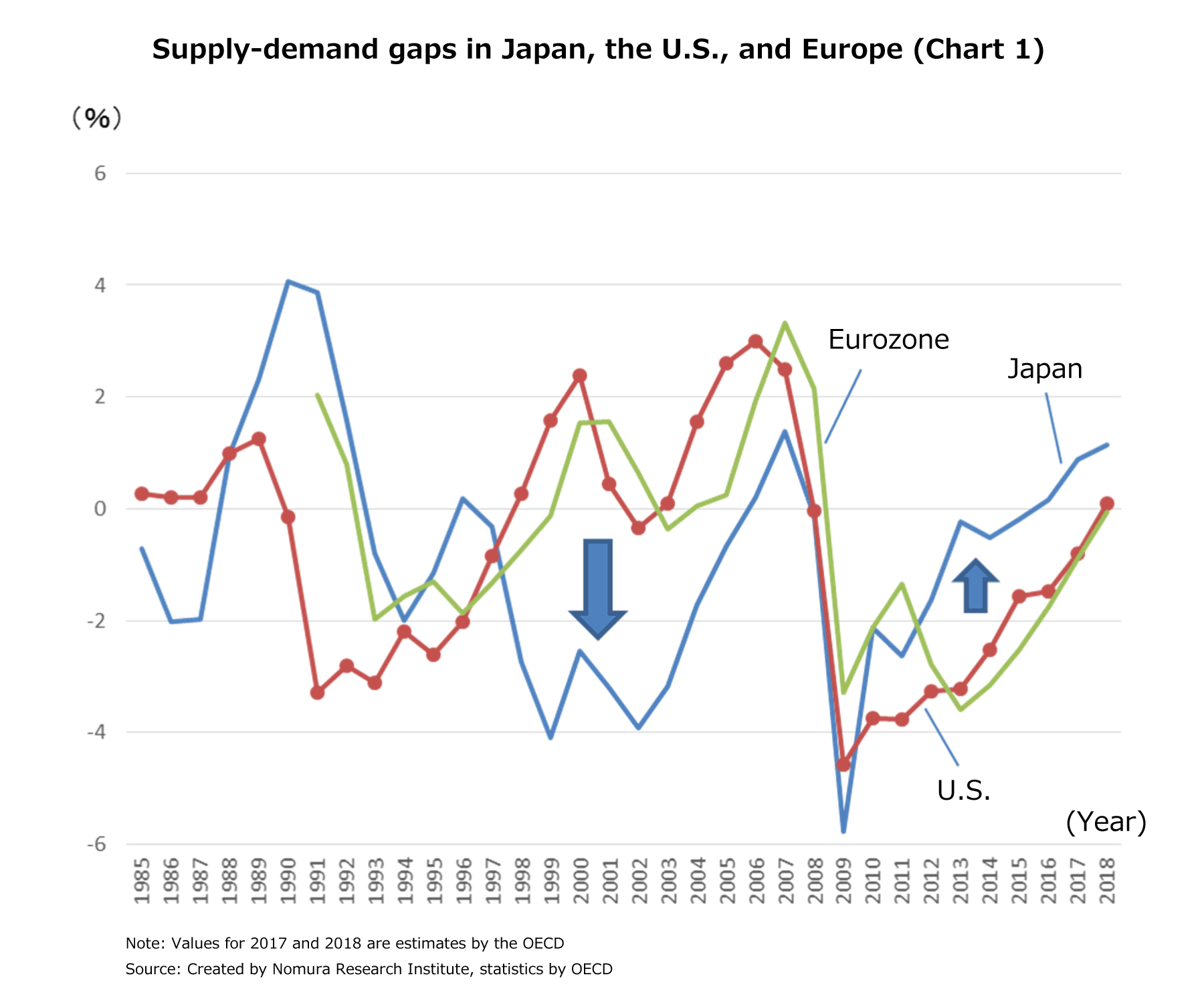 Market adjustment as the trigger for economic recession?

The global recession that began in 2008 was said to be triggered not by overheating or by monetary tightening measures in response to overheating, but by the autonomous adjustment of U.S. real estate prices. At the time, declines in economic potential had decreased the likelihood of overheating, and investors were experiencing Goldilocks economy (optimal market/economy that is just right—not hot, not cold) optimism, much like they are today. In other words, it was a situation that could tip easily into economic overheating. As a result, what finally pulled the trigger for the recession were not adjustments in the real economy, but the autonomous adjustment of market prices. As such, we must be aware of similar risks as we move forward into the future.

Strains on the real economy are reflected in things like surplus stock or equipment, which makes it easier to see when it could trigger an economic recession. Recession triggered through autonomous adjustments in market prices, however, is much more difficult to predict.

Government bonds market the most affected by market distortion

Currently, the government bonds market is the most overheated in the financial market, and the most affected by market distortion. After the Lehman Shock in 2008, many of the world’s leading countries implemented monetary policies in which central banks purchased large quantities of government bonds. As a result, government bond yields, the basis of all market prices, fell into decline, causing a dramatic decrease in liquidity and increased market distortion in the world economy. If some kind of market shock were to rapidly eliminate this distortion, it would lead to widespread and simultaneous price adjustment for various financial assets, which could trigger a world recession.

In October of last year, the U.S. FRB (Federal Reserve Board) initiated its asset reduction plan, with assets that include government bonds. This was to reduce the effects of the monetary easing policy, as well as to gradually reduce market distortion—in other words, a step towards normalization. The ECB (European Central Bank) has also decided on a two-step reduction of their rate of asset purchase, and plans, by the end of this year, to shift towards a maintenance of their current balance. The Bank of Japan, following its implementation of yield curve control in September 2016, has also gradually decreased its rate of government bond purchase.

There is, of course, the fear that these kinds of normalization policies will lead to market adjustments, but more frightening than that is the possibility of even greater market distortion, and a large-scale adjustment in the future. The risk of this kind of normalization leading to the large-scale purchase of government bonds by central banks, and then to chaos in the government bond market, is much lower than before. However, the distortion that has grown as a result of this asset purchasing behavior cannot be reversed in a short period of time. The only way to accomplish this is for each central bank to be fully aware of the risk they have caused, and work slowly and carefully towards normalization. They should also be aware that if there is a sudden bout of autonomous adjustment in the market during this process, it carries with it the risk of instability in the financial market as a whole, and may perhaps even lead to a global recession.