Takahide Kiuchi's View - Insight into World Economic Trends :
Will Corporate Debt in Emerging Nations be the Next Global Risk?

Ten years have now passed since the global financial crisis that was precipitated by the Lehman Brothers collapse. Now, with the worldwide economy enjoying a long-term recovery, concern is slowly mounting over what might trigger the next economic and financial crisis.

Crises always manifest in different forms at different times. That is, the risks that precipitate crises always exist in different places and involve different mechanisms in each case, meaning that experience gained from previous crises can’t simply be used to predict future ones.

However, one factor that has invariably been present before the economic and financial crises of the past is the growth of debt. Even in cases where debt hasn’t been the direct trigger of an economic or financial meltdown, it’s played a role in exacerbating the crisis through the act of deleveraging, i.e. the reduction of excess corporate debt. From this perspective, focusing on global debt is useful for predicting the epicenter of an economic or financial crisis, or alternatively the scale of one.

While the U.S. has repeatedly been the epicenter for global economic and financial crises in the past, there are currently no signs of a serious debt problem in its business or consumer sector. Even if one looks at the developed world overall, both the corporate-debt-to-GDP ratio and the ratio of household debt to disposable income have stayed mostly unchanged in the years since the global financial crisis, and there are no indicators of excessive debt. 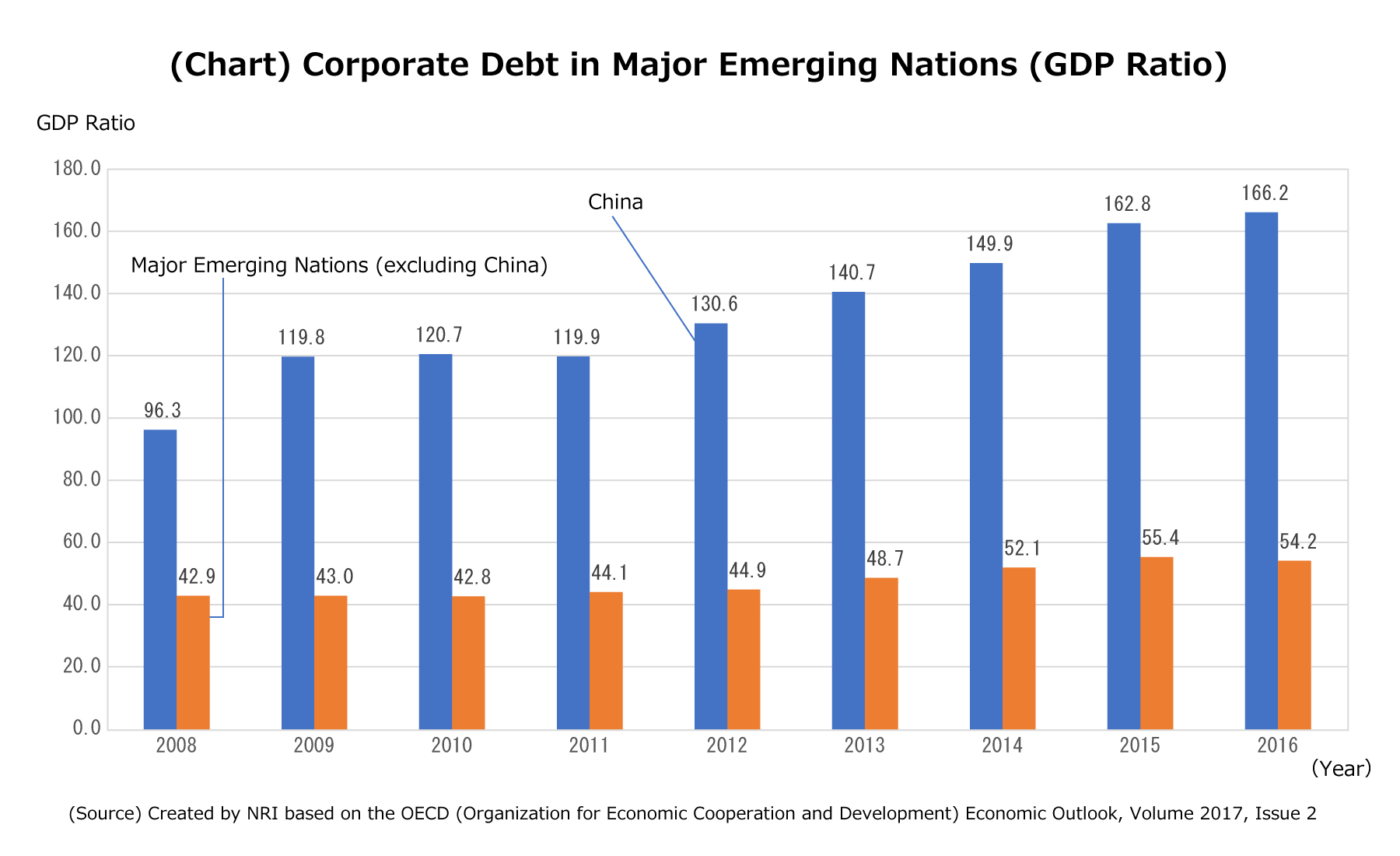 Furthermore, if we look at changes in the makeup of debt in the wake of the global financial crisis, we see that the proportion of bonds has been on the rise in both the developed and the emerging worlds. Given the lower willingness of financial institutions to take risks after the global crisis and the impact of recent banking regulations, for example, this trend represents a shift in debt choice in the business world from bank borrowing to issuing bonds. It also signifies that financial risk has now shifted from banks to corporate bonds.
The most significant characteristic in recent years in the issuance of corporate bonds in emerging nations, including China, is the growth in corporate bonds issued overseas. Companies in emerging nations are increasingly using their overseas subsidiaries to issue corporate bonds abroad rather than at home. According to the Organization for Economic Cooperation and Development (OECD), about half of the corporate bonds issued abroad between 2009 and 2013 by companies based in emerging nations (non-finance) were issued through overseas subsidiaries. And funds procured in this way are often used by companies for “carry trading”—that is, for raising their profit margins.
Funds raised through the issuance of corporate bonds abroad by overseas subsidiaries are given to the parent company back home. The parent company then invests those funds in domestic corporate bonds having a higher interest rate than that of the borrowed currency, or lends them to another domestic company at a higher interest rate, thereby making a profit. Thus, the issuing of corporate bonds overseas by companies based in emerging nations is, to a significant degree, a method of asset management rather than a means of furthering domestic economic activity.
At that time, such a company would assume an exchange risk from the bonds issued in the foreign currency by its overseas subsidiary. And if the procured funds are used for lending to another domestic company, the credit risk of that borrower would also become an issue. It’s possible that the yields of foreign currency bonds issued overseas may not fully reflect the risks that lurk within carry trading.

Corporate Debt in Emerging Nations: An Accelerator of Global Economic and Financial Turbulence?

Thus, a greater share of the risk that could threaten the stability of the global economy and financial markets in the future is shifting from the developed world to emerging nations, specifically to corporate debt. The procurement of funding by issuing corporate bonds in a foreign currency, a practice which has grown most conspicuously in recent years, is overwhelmingly done for the purpose of carry trading, and investors who purchase these corporate bonds may well be taking on enormous risk without even realizing it. This trend could even end up being the kindling for future chaos in the corporate bond market.
It’s uncertain whether the high levels of corporate debt in emerging nations will naturally enter a correction phase and lead to a deleveraging that weakens the economies of emerging nations, or whether falling prices of corporate bonds issued in foreign currencies will end up playing a central role in major adjustments to the global economy and financial markets. However, we should take note that if irregularities in developed world economies or financial markets lead to worldwide economic slowdown, rising interest rates, or further appreciation of the U.S. dollar (i.e. currency depreciation in emerging nations), this might prompt a deleveraging trend in the emerging nations as companies move to reduce their excess debt, which could serve as an accelerator to amplify the instability in the global economy and financial markets.