Many regional railways and rail lines operated by third-sector ventures all over Japan are facing an existential crisis, unable to stay solvent as populations along routes dwindle and the only transportation demand comes from commuters and students. While some operators aim to survive by transporting tourists coming from outside their routes, not all railway companies can realistically transform themselves into sightseeing railway operators. In addition, although a number of regional rail lines once received various kinds of assistance from affiliated major private railways, they now find themselves forced to break off from their affiliates and sustain their businesses independently.

Amid these circumstances, it’s becoming more common to see vertical separations of infrastructure and operations. Local municipalities along rail lines, public enterprises, and third-sector ventures own the land, facilities, and other assets, while private companies as well as other such ventures lease them. Many vertical separation systems involve local municipalities using tax revenues to fund rail lines, but in some cases, we also see railway fans with strong personal attachments to rail lines and other citizens participating in efforts to maintain them.

Running through the center of the Boso Peninsula in Chiba Prefecture, the Isumi Railway (spanning 16.65 miles) came into being when Japanese National Railways (JNR) was broken up and privatized and the old JNR Kihara line was taken over by a third-sector railway operator. Although launched as a third-sector venture, the line had been continuously operating in the red, and so the operating company ended up inviting applications from the public for a new President. Ever since President Torizuka took over in 2009, the company has been hard at work restructuring its business.
In 2010, the company purchased a Kiha 52-125 diesel multiple unit train car formerly used by JR West Japan, and since April 2011 this unit has been in service as a sightseeing express train. This operation reflects the company’s desire to recreate scenes from the old JNR era amid the rural landscapes along the Isumi Railway, to contribute to regional revitalization as a tourist attraction, pass on the cultural heritage of our railways to future generations. In the springtime this old JNR carriage runs against a backdrop of idyllic pastoral scenery replete with rapeseed and cherry blossoms, successfully attracting countless railway enthusiasts known for their love of riding and photographing trains.
The Isumi Railway has also started something called the “Showa JNR Diesel Car Series Owners and Supporters” system. Under this system, those who contribute an annual donation amount of 5,000 yen ($45), 50,000 yen ($450), or 500,000 yen ($4,500) can become owners and supporters, with each level offering particular privileges and benefits to contributors. This system is expected to entice and ensure the patronage of railway fans, and effectively increase the number of repeat riders.

However, various challenges remain for the Isumi Railway initiatives. The old JNR diesel cars continue to age, and it’s impossible to predict how long they can be maintained. Plus, railway photography enthusiasts who gather along the route don’t necessarily contribute to the operating company’s sales revenue. Going forward, it will likely become crucial to partner with local municipalities and other agencies to figure out how the line can be used to help revitalize the region. 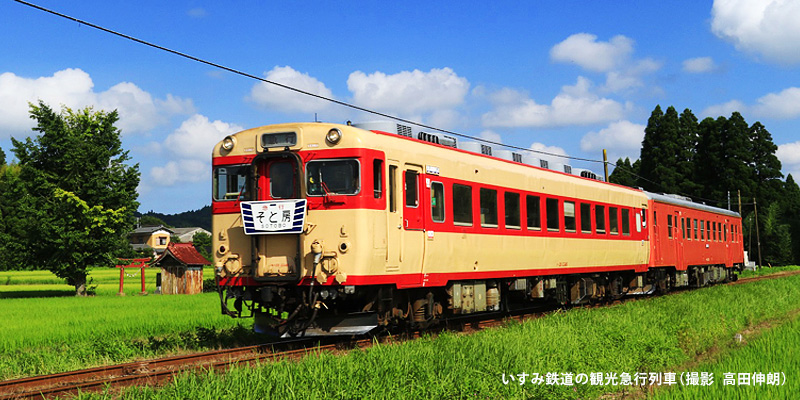 Oigawa Railway runs slightly over 40 miles along the Oigawa river in central Shizuoka Prefecture, and was originally constructed for transporting materials to build a dam on the river. Once the dam construction was done, the line no longer needed to transport freight, and in 1976 the operating company began restoring steam locomotives to service. Currently, the railway has four steam locomotives in operation.
Although there are railways all across Japan that still operate steam locomotives, the Oigawa Railway is something of a trailblazer in this regard, and one of its special features is that the passenger cars pulled by the steam engine are old-model cars that were once used by the JNR. Something else unique about the line is that some of these steam engines and old passenger cars are owned by the Japan National Trust.

The Japan National Trust was founded in 1968 to preserve and make the best use of Japan’s natural splendor, important cultural assets, and historical sites with contributions and donations from citizens, so that they can be passed down to future generations. It owns various historical structures such as traditional gassho-style thatched roof houses in the historic Shirawkawa-Go Village, The Former Kusuo Yasuda House in Tokyo, and the Komai House in Kyoto, which are open to the public. Its homepage describes its Trust Train project as having “the first steam locomotives and historic passenger cars in Japan to be preserved by public participation”.

Running through the mountains along the Oigawa river, this rail line has very little commuter ridership among the local residents, and it has sustained itself by promoting its steam locomotives as a tourist attraction. While it seems that the popularity of steam locomotives remains high, with the cars nearly 90 years old now, how long they can stay in service is a serious concern. Besides the steam locomotives and old passenger cars, the Trust also possesses old electric cars bequeathed by major private railway operators and other cars that have value as part of Japan’s industrial heritage. However, these too are nearing the end of their service life. There is concern over whether such operators will be able to stay afloat by maintaining their business model of attracting tourists on the appeal of their vintage train cars. 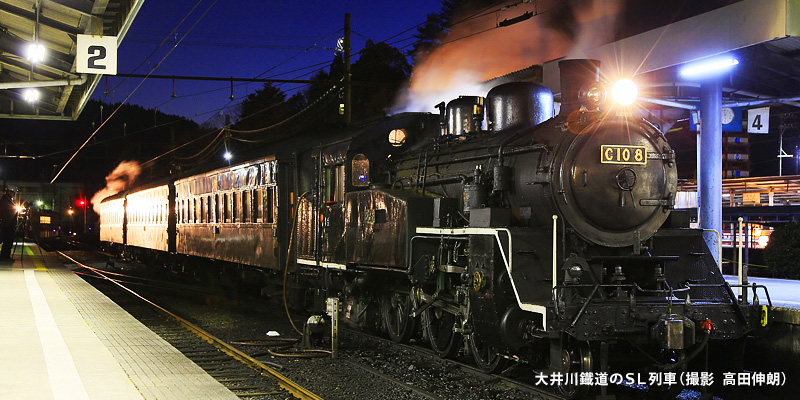 A steam locomotive on the Oigawa Railway (photographed by Nobuaki Takada)

Ensuring that the “Showa Retro Boom” is No Passing Fad: Getting the People Involved in Preserving Japan’s Industrial and Cultural Heritage

With the Heisei era (1989 - present) about to close and a new era to be named following the enthronement of the Crown Prince next year, the preceding Showa era (1926 - 1989) seems part of an increasingly distant past. Yet there is also something of a “Showa Retro Boom” happening in Japan these days. The two railway operators discussed here have successfully tapped into this Showa retro nostalgia to attract more customers. The average service life of a rail car is said to be between 30 and 40 years, but now that 30 years have passed since the JNR was broken up and privatized, nearly all of the train cars that were running during the old JNR era have disappeared. For middle-aged and older railway fans with the time and financial means, there is no shortage of persons with a deep affection for these scenic routes, or their train cars and stations that still offer lingering traces of the Showa era. Besides its railways, Japan has a wealth of cultural treasures from its industrial heritage which have supported the country’s economic development. However, nowadays many of them are going without preservation and are disappearing. As Japan’s population shrinks, preserving and maintaining these precious industrial and cultural properties while keeping societal costs down will require more than investing tax revenues—it will also necessitate public involvement in various forms. It therefore seems imperative that we fashion a framework to enable citizens to actively participate in these preservation efforts.