The phrase “information bank” refers to a system for managing people’s personal data, such as their behavioral histories or purchasing histories, and then providing such data to companies or other third parties on their behalf with their permission. Under government leadership, studies are now being undertaken to see how personal data could be circulated across companies and even industries. NRI conducted its own social survey in 2017 to determine how receptive consumers are to the management and distribution of their personal data. We spoke with survey coordinators Hiroki Kawashima and Ryo Kamimura about their findings as well as the future prospects for “information banks”.

A Paradigm Shift for Personal Data as the Backdrop

In recent years, more people have been adopting the belief that any data generated as a result of a person’s activities—i.e. personal data—should not be monopolized by corporations, but rather should also be placed in the control of the individual concerned. In the EU, the General Data Protection Regulation (GDPR) scheduled to take effect on May 25, 2018 affirms the right of individuals to remove as well as delete their personal data from a company’s internal systems.

For example, due to the spread of IoT, information on people’s athletic or exercise activities, their heartrates, and other vital data is now being stored as personal data. However, such stored data is dispersed among individual services and applications, and thus it can neither be seen in full nor be removed. This makes it difficult to gather the data for analysis, or to transfer it over to a superior service when one becomes available. It’s at such times that the right to control one’s personal data becomes crucial.

If data were to come under the control of the individual, companies would also stand to benefit. If corporations gain access *1 to “deep data”, which refers to various kinds of personal data that has traditionally been too dispersed to be grasped as a whole, they would be able to learn about consumers on a deeper level, thereby enabling true one-to-one marketing.

That said, the varieties and volume of personal data are vast, as is the number of data recipients. There are also limits on the extent to which individuals can control their data, such as in deciding to provide it to one company but not to another. These limits led to the initial conception of “information banks” as a mechanism for exchanging personal data safely with companies on behalf of the individuals concerned. This mechanism would enable companies to provide better services, while also allowing individuals to entrust their data with peace of mind. 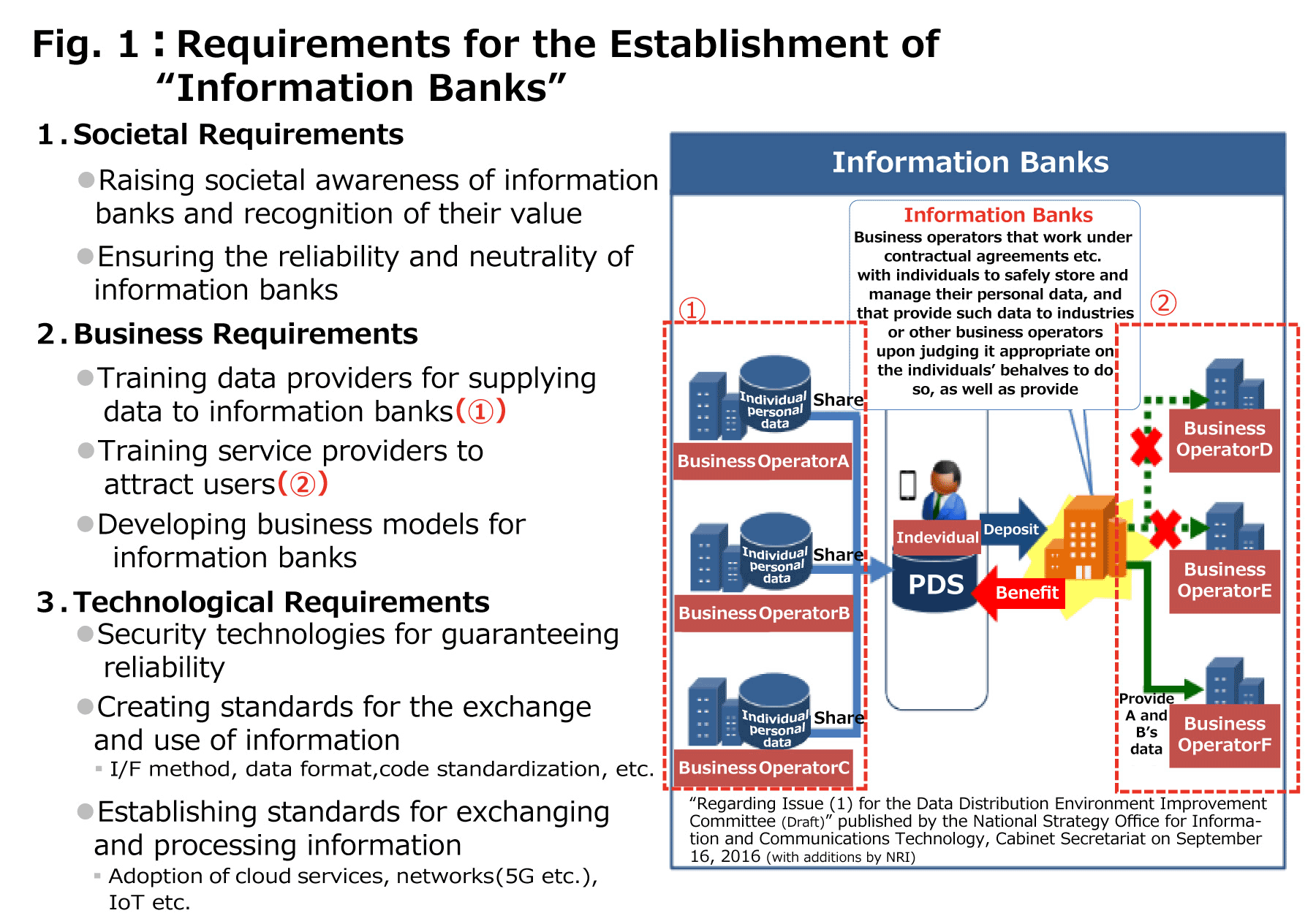 40% of Consumers Willing to Use Services That Utilize Information Banks

Making information banks a reality will require solving a host of challenges as seen in Figure 1, but the most important one is raising social awareness and getting people to understand their value. NRI therefore conducted a social survey to ascertain the willingness of consumers to use services that utilize information banks and to determine their core values at the present time.

Naturally, consumers will have a hard time answering when asked about their willingness to use something that doesn’t yet exist. In carrying out the survey, NRI prepared a demo application envisioning a world with information banks, devised ways to depict potential use scenarios, and even combined online questionnaires and focus group interviews.

In the end, approximately 40% of respondents reacted favorably to the idea of services using information banks. Those consumers who felt uneasy about having their personal data unilaterally managed and used by companies seemed the most inclined to use such services. What we can infer from this is that going forward, if more people will come to view data as something belonging to individuals, the idea of information banks will likely find greater acceptance. 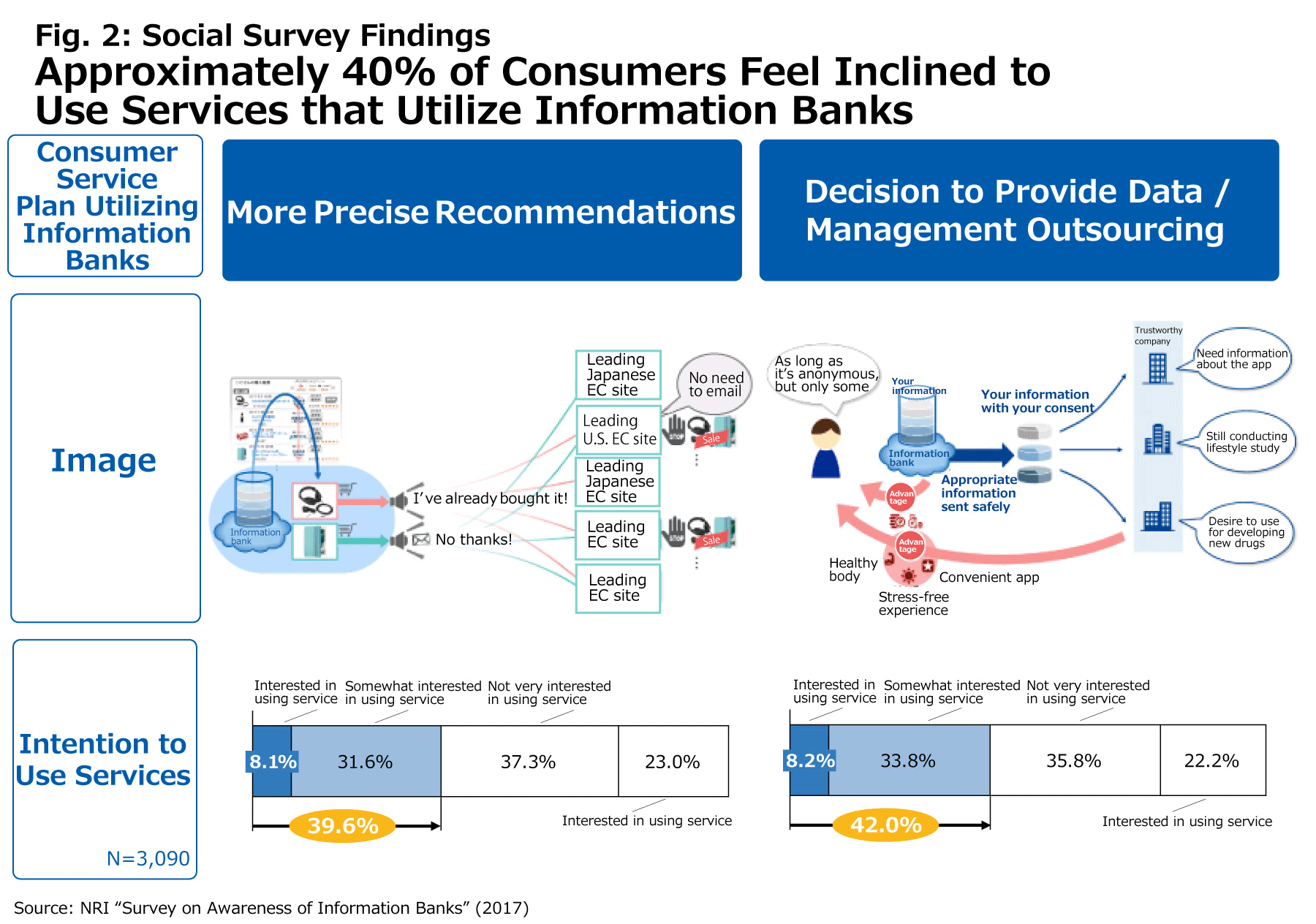 Surprisingly, Consumers Not Opposed to Providing Their Data in Some Cases

Using conjoint analysis*2 to look at the differences in consumer receptiveness depending on the data recipient, data category, and value/benefits, we see a fascinating variation in attitudes. For instance, many would prefer not to provide their data to SNS services, financial institutions, temp agencies, and other such places, yet have no qualms if the recipient is a medical institution, the government, or a college or university. In addition, we see that people are disinclined to share their highly private asset data or location information, yet show little resistance toward providing healthcare information even though it involves private matters.

What these results reveal is a certain consumer psychology, one that is permissive towards the use of personal data by entities that are highly public in nature or for addressing society-level problems. However, this psychology also discourages people from providing personal data in cases where it would work to their disadvantage, i.e. if it were used as a basis for determining their bank interest rates or hiring prospects. Consumers differ in when they feel it’s acceptable to provide their personal data, and so for information banks to gain acceptance in the world, it would seem necessary to have a system that allows people to specifically control when and how their data is provided.

For information banks to take off, it’s crucial to give consumers an accurate understanding of their value and make the idea palatable to them. Their anxieties need to be removed, by offering them a vision of a world brought about by new services and business models made possible by the existence of information banks.

*2 A prominent multivariate analysis method, which makes it possible to statistically discover which features of a product or service consumers value the most, and what combination(s) of factors are most popular among consumers.

A New World Made Available Through Greater Convenience and Industrial Development

From a company perspective, the use of information banks could make it possible to obtain an unprecedented depth of data. This would allow companies to form deep connections with consumers, to produce highly valuable products and services, and even to uncover new demand. Achieving this purpose will require a type of analytics and marketing technology that is entirely different from the use of big data as we’ve known it. The corporate world would do well to think sooner rather than later about what measures to take as it faces the coming age of personal data use.

While it’s still unknown how information banks will become widespread, they’re certainly a promising mechanism that could serve as an engine for driving data capitalism. And NRI for its part will be keeping a close eye on the latest developments for the information bank phenomenon.