2018 has been full of major sporting events such as the PyeongChang Olympics and the FIFA World Cup. Some of the biggest players in promoting sports and developing athletes have been private-sector companies. NRI conducted a survey on corporate sports and Japan’s public opinion in 2000 and another in 2008, but how has the public’s attitude toward sports changed since the last survey roughly a decade ago? We interviewed Fusao Misaki and Ryo Nishizaki of the Consulting Division, who conducted the latest such survey in November 2017.

――Companies support sports and athletes in various ways. What are some characteristics of “corporate sports”?

Misaki: With “corporate sports”, a company employs athletes as full-time employees who engage in sports besides regular work, and it continues employing them after retirement in sports. Examples include the rugby team at Suntory, the judo team at Nippon Steel & Sumitomo Metal and the volleyball team at JT. Other ways of developing and supporting athletes include professional sports as a business that generates ticket sales; social groups of employees playing sports before or after work; and sponsorship for funding athletes and teams.

――How come companies support teams and athletes in such a way?

Misaki: Corporate sports in Japan started out with the purpose of employee welfare, as part of Japanese corporate culture that treats employees as family members. There was a textile factory around 1920 that employed many female workers and was criticized for its labor environment. This factory tapped volleyball as a means for promoting wellness and providing recreational opportunities, and this is said to be how corporate sports were created. Subsequently, sports were incorporated to create a sense of solidarity and unity by encouraging workers to cheer on players together, as well as for the purposes of advertising, enhancing corporate image, and making social and community contributions.

――What did the latest survey find?

Nishizaki: What we found first of all is that public interest in sports as a whole is on the decline. Respondents who were “not interested in sports” increased by about 10 percentage points from the 2008 survey to 31.9% in 2017. This, however, was precisely what we had expected. A diverse range of entertainment is available today, and younger people are paying less attention to sports; as a result, TV ratings for professional sports are weak. So we feel that the survey showed numerically what has been happening in society with regard to sports.
We conducted the survey in November 2017, before the PyeongChang Olympics and Paralympics were held, to avoid any influence of these events. This has allowed the findings to reflect the general public sentiment, I think.

Misaki: Similarly, interest in corporate sports is on the wane. Many companies dissolved teams during the downturn in the 1990s, and the number of corporate teams has not increased much since then.

Nishizaki: Given such a trend, the survey asked who should replace companies in supporting sports. Those who said local communities and residents should provide the support was the most common response 10 years ago, with 39.6% of respondents agreeing. This time, those who believed the government should support sports was the most popular answer, increasing more than 10 percentage points to 36.4%. This shows a significant change in public opinion.

The Relationship Between Sports and Public Happiness

――What do you think is behind that change?

Misaki: With the launch of the Japan Sports Agency and the government’s goal as part of its growth strategy of expanding the sports industry to 15 trillion yen ($136 billion) by 2025*1 (roughly triple the 2012 level), the public sees that the government is spearheading an effort to promote sports, I think.

Nishizaki: When asked what they hoped to see with corporate sports, 41.1% of respondents said “developing world-class athletes”, making it the No. 1 answer. People think that a government-led effort?rather than support from a certain region or corporation?would create a more suitable environment and enhance the development of coaches, instructors and personnel, and this is one reason, we think.

――You also asked a question to see what makes people feel happier: Japanese athletes doing well internationally, or things like the worldwide use of Japan’s scientific technology, improvements in the international competitiveness of Japanese corporations, and Japanese people receiving Nobel prizes.

Nishizaki: We asked a similar question in 2008. Compared to that time, the answer “seeing Japanese athletes do well” surged to the third-highest out of 10. This indicates that sports bring about a relatively high level of happiness to Japanese people, even though public interest in sports is on the decline. 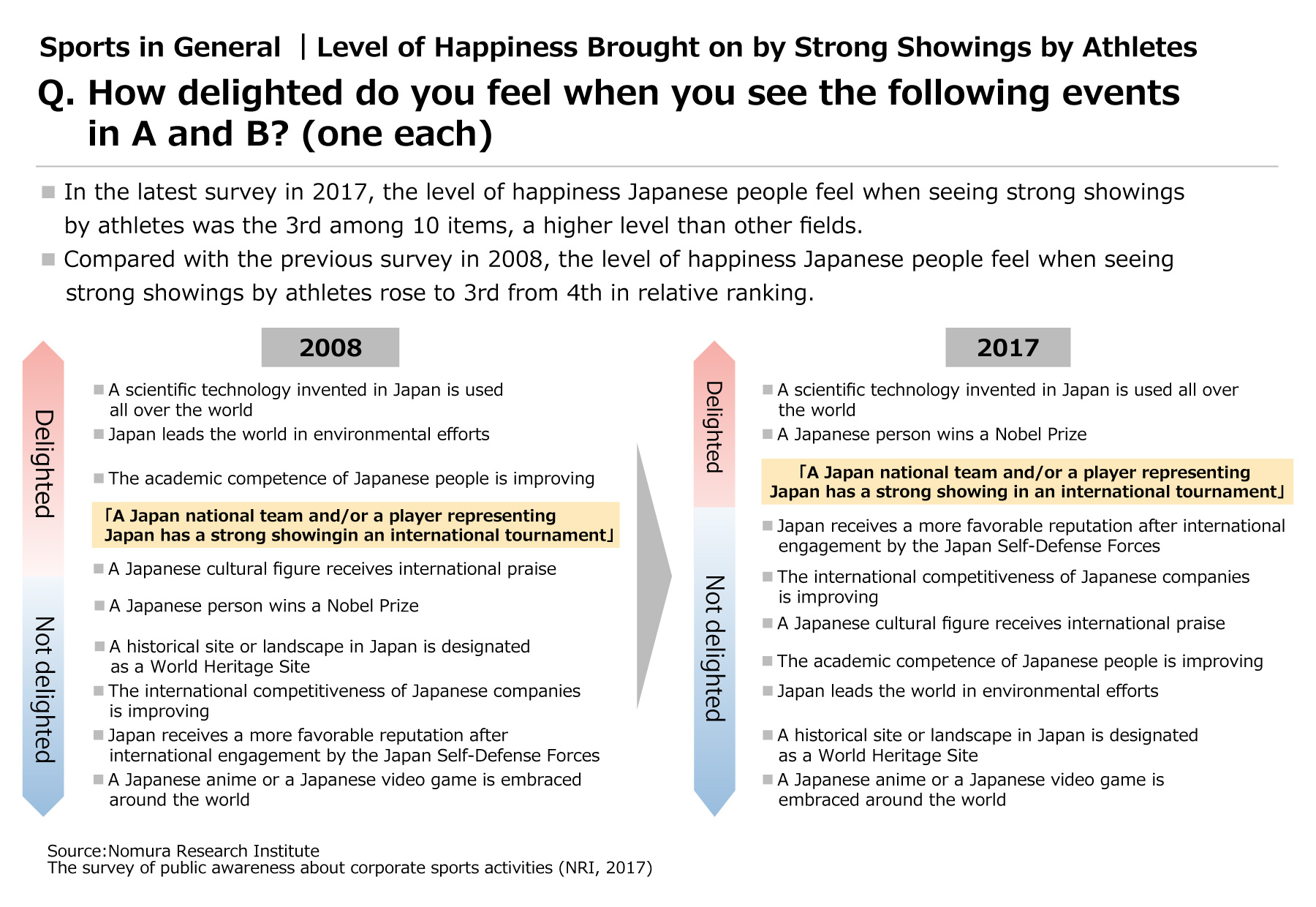 Sports Can be Supported in Various Forms

Nishizaki: It is difficult to indicate the value of sports in a concrete way, but “contributing to the happiness of the public” as shown in the latest survey is one way of representing the return on funds provided. Companies will be more willing to invest if they see that, say, this sport helps with corporate advertising and that sport helps create a sense of unity with a community. Now that Japan is set to host the 2020 Tokyo Olympics and the momentum for sports promotion is growing, it is important for each sports field to clearly inform corporate sponsors of the advantages of doing so and the direction they should focus on.

Misaki: Companies have various choices in terms of providing support, including culture and arts, and they may think that supporting sports is more effective than supporting other things that ranked lower in the comparison survey. Today, various forms of sponsorship are available, such as paying for part of costs rather than for a whole team, and using crowdfunding. We’d like to see increased efforts to attract investment by providing information to companies willing to start sponsoring, rather than relying solely on the government.