Known for streamlining and optimizing the whole sequence of operations from R&D to production, purchasing and procurement, distribution, and after-sale services, as well as for boosting customer satisfaction and cutting costs, Supply Chain Management (SCM) has been adopted as a business-critical operation not only in manufacturing but also in a wide range of other areas such as the distribution and service industries. Many companies are now deploying “Global SCM” for their supply chains on a worldwide scale. And thanks to “Digital SCM” which takes advantage of technologies like IoT and AI, there is growing potential for innovative process reforms. NRI’s Kazuhiro Terasaka, who has been involved in operational reforms in the manufacturing and distribution industries, commented on the key points for us.

A key premise when thinking about SCM is that it is all based on “things”. For instance, items that are small in size but are heavy are not suited to mass transport by airplane, while the shipping process and system will be different depending on whether the sales unit is one item or 10,000 items. In this way, companies need to consider the properties of the “things” involved and link together R&D, production, logistics and various other functions. In particular, since on-site logic is different for every function, you need to erase the barriers and the bottlenecks between functions and pursue process reforms from the standpoint of overall optimization.

Leveraging IoT or AI at such time will promote the automation, streamlining, acceleration, and multi-potentiality of your company’s operations, and will rapidly enable you to achieve an advanced SCM. For instance, introducing IoT to a work site where the workers are collecting data in handwritten form or by reading barcodes will make it possible to gather data automatically from sensors embedded in your equipment, and to perform high-speed processing including transferring. This means fewer errors arising from human operation, and allows numbers to be handled on a level of detail previously unattainable, and thus the freshness and accuracy of your master data and performance results data will improve dramatically.

Plus, if you use AI’s predictive functions when making your distribution delivery plan, you can create endless patterns for your delivery lead time and other elements as well as derive optimal routes, factoring in things like inventory fluctuations, customs procedures, and road congestion in different locations. AI is still developing, but it’s said that while the human brain can conceive of between 50 and 1000 logic paths, AI is able to conceive of between 100,000 and 10,000,000 logic paths, and that number is increasing at a geometric rate. And we’re also seeing venture firms emerging that find logic paths existing somewhere in the world, apply their analytics to it, and produce the optimal calculation formulas for their company. I think it’s imperative for companies to leverage these kinds of outside capabilities in using AI-based learning to get systems in place that they can use themselves. 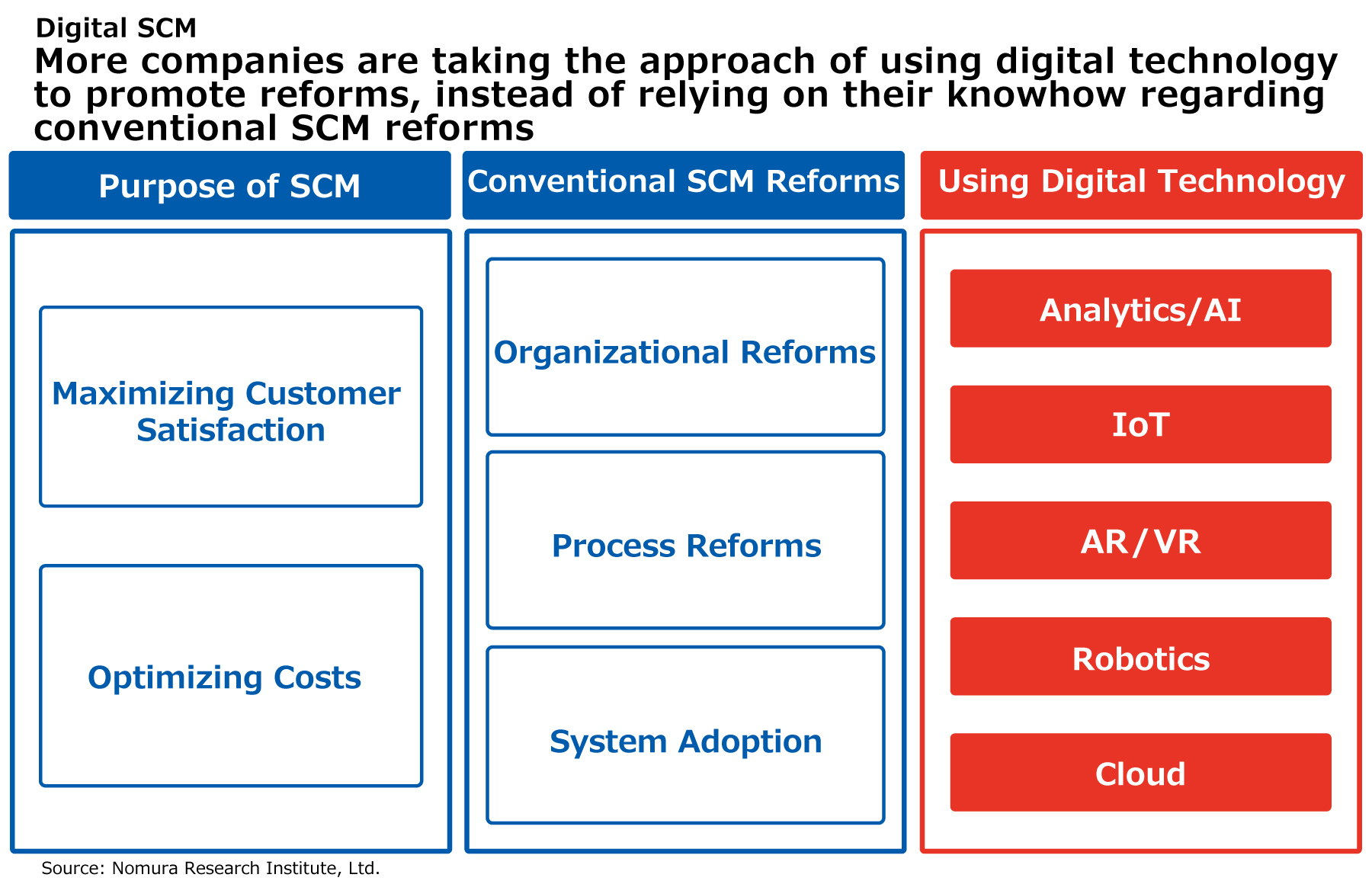 The West Leads the Way in Digitalization

The reason is that when I’m in charge of projects outside of Japan, I get the impression that when it comes to things like adopting IoT or AI and developing platforms, Western companies are way ahead. It was originally in the West that the mechanisms were created, with the idea of controlling systems remotely across national borders. It’s simple to digitalize everything and incorporate it into your system for processing, or to decide the rules for circulating your “things”, and SCM digitalization is also easy to undertake.

If anything, Japanese SCM is rooted in processes-based thinking, such as how to move “things” efficiently onsite, or how to manage inventories. Japan’s manufacturing worksites are said to be really good, but basically their forte is measures that can be applied within their own range of vision, and there are some aspects that aren’t compatible with digitalization. For instance, the greatest feature of Toyota’s production method, its “just-in-time” manufacturing method, is made possible by its supply chain in Japan made up of many factories located close together, which use the Kanban system to achieve flexible order and supply control functionality. Optimizing this process is precisely where Japan’s strength lies. However, in other countries where the closest factory might be over a thousand miles away, management has to be done using a different approach, such as optimizing your delivery system by controlling your in-stock inventory. Performing control at such distances requires using digital technology for management.

Two Directions: Partnering with Outside Organizations and Deepening Your Domains of Expertise

When it comes to building a supply chain, you’re subject to certain restrictions, including the properties of the “things” involved as well as the facilities and human talent at your company’s disposal, and thus it’s impossible to just borrow the system of some leading competitor. Meanwhile, companies in developing nations—to the extent they’ve lagged behind until now—can simply adopt Western systems, so their progress happens at a dramatic speed. I’ve heard that one time, when an Indian manufacturer requested estimates from various domestic and foreign suppliers, a local company took two days to respond while a foreign enterprise took five days, whereas the Japanese company took two weeks to reply. With this much of a variance in the number of days, there’s no way to win in a global competition.

Of course, the traditional Japanese way of doing things is excellent in many respects. An important aspect is making sure your process can be achieved not only at the “mother” factory in Japan, but in overseas locations as well. This entails clearly organizing and systematizing things like your methods for ordering and supplying, how to create your production lines, how to find malfunctions on your lines, your warehouse layout, and your employees’ behavior. At such time, rather than insist on the uniquely Japanese domestic way of doing things, if you can look at how the local staff at your overseas locations have learned and incorporated it, and use that as your reference, your system can likely be applied globally.

Coming out ahead in the supply chain world requires you to either undertake innovative process reforms involving digitalization and partner with outside organizations to expand horizontally, or delve even deeper into your areas of expertise. Even if you have a dominant position now, a rival can steadily overtake you in a few years’ time. For its part, NRI wants to link up with different tech companies and stay current with the latest technologies, while also helping our customers apply digital technologies and solutions in a way that’s tailored to their on-site features, and supporting them in their reforms.

NRI’s Principals have high level of expertise in specific markets or solutions.
As leading consultants, they have been leading innovations for society and NRI’s clients.
NRI’s Principals create new businesses, commit to clients and have responsibilities to solve our client’s issues.