Takahide Kiuchi's View - Insight into World Economic Trends :
Are the Effects of the Planned Consumption Tax Increase Being Overestimated?

A proposed consumption tax hike is scheduled to take effect in October 2019, but the Japanese government has already begun looking into ways of handling an economic downturn that could occur after the increase takes effect. It appears that mortgage and auto-related tax breaks would form the pillar of these measures.

The government is expected to hammer out the details of this tax relief program by the end of the year, along with other economic policies including budgetary provisions. With regard to mortgage-related measures, the government is considering its options, including expanding the current mortgage relief program—which grants home buyers up to 5 million yen (approximately $45,450) in tax deductions over ten years depending on their remaining loan balances—and then temporarily increasing the amount of the tax deductions after the consumption tax hike, or extending the deduction period through December 2021. As for automobiles, it is considering doing away with the 3% vehicle acquisition tax imposed on purchases of standard vehicles and replacing it with a new 0%-to-3% tax depending on vehicle fuel efficiency, or perhaps giving buyers subsidies at the time of purchase.
The government is also thinking about incorporating economic countermeasures in its initial budget for FY 2019, as a way to handle a reactionary drop following the consumption tax hike. If it does, the initial budget would be more likely to exceed 100 trillion yen ($909 billion) for the first time ever.

Yet there remains room for doubt as to whether such measures are truly necessary. In the first place, creating enough demand through policy to precisely offset a reactionary drop following the consumption tax hike would be a herculean task. If the policy effects come too late for the reactionary drop they won’t be an effective countermeasure, whereas if they happen too soon, they would not only generate unneeded demand but also amplify the reactionary drop. What’s more, when the policy effects have run their course, it will produce another falloff in demand. It is therefore fully possible that not only will the measures fail to cancel out the post-hike reactionary drop and reduce economic fluctuations, they could in fact exacerbate them.
Secondly, while adopting permanent measures would effectively prevent a new slump in demand when the policy effects run out, doing so would end up significantly curtailing the effects of the consumption tax hike when it comes to reducing the budget deficit. The consumption tax rate is scheduled to go up from 8% to 10% in October 2019, with the resulting increase in revenue coming out to 5.6 trillion yen ($50.1 billion) per annum. However, the proposed spending on certain permanent measures—such as offering VAT relief, and expanding free education programs—is expected to consume some 2.4 trillion yen ($21.8 billion) of this. If the remaining 3 trillion yen ($27.3 billion) were to be allocated towards financial resources for countering a reactionary drop, it would further mitigate the effects of any budget deficit reduction. Perhaps it’s only natural to wonder what purpose would be served by raising the consumption tax rate.

The Bank of Japan estimates that the net impact on households around when the consumption tax hike is implemented in 2019 will be 2.2 trillion yen ($20 billion; see chart). This figure is markedly smaller than the 8.5 trillion yen ($77.3 billion) increase in the household burden when the consumption tax was raised in 1997, as well as the 8.0 trillion yen ($72.7 billion) increase when the tax rate was again raised in 2014. This can be attributed to the fact that (1) the tax rate will go up by only 2% (from 8% to 10%), which is less than the previous 3% hike, and (2) the new lower tax rate and other permanent measures will help lessen the income burden on households.
Furthermore, when the consumption tax was raised in 2014, an additional tax hike was planned for the following year, leading to a surge in last-minute purchases on homes as well as cars and other durable goods. One might even say that the purchasing rush occurred at that time in anticipation of long-term future trends. Taken together with the smaller scope of the tax rate hike, this likely means that the rush purchase demand produced by the 2019 consumption tax hike will be relatively small, and consequently that any reactionary drop will also be minimal.

Proceeding with Caution in Handling a Reactionary Drop

That the Japanese government is especially focused on mitigating a reactionary drop following the consumption tax hike is likely rooted in the belief that the 2014 tax increase dealt a real blow to the economy, but this notion needs to be reconsidered. While the real GDP growth rate in FY2014 was initially -1.0% (real consumer spending: -3.1%), that figure after a statistical revision now stands at -0.3% (same: -2.5%), meaning that the growth deficit was much smaller than initially thought.
Given the above, it is possible that the expected reactionary drop following the 2019 consumption tax increase is being vastly overestimated by the government or even by the populace at large. We must be fully aware that taking excessive action against a reactionary drop could have the adverse effects of exacerbating economic fluctuations, or cause the fiscal environment to deteriorate further. What’s more, the measures must not unnecessarily inflame public anxiety over what will happen to the Japanese economy after the consumption tax rate hike. One hopes that the government will fully appreciate these concerns and tread carefully. 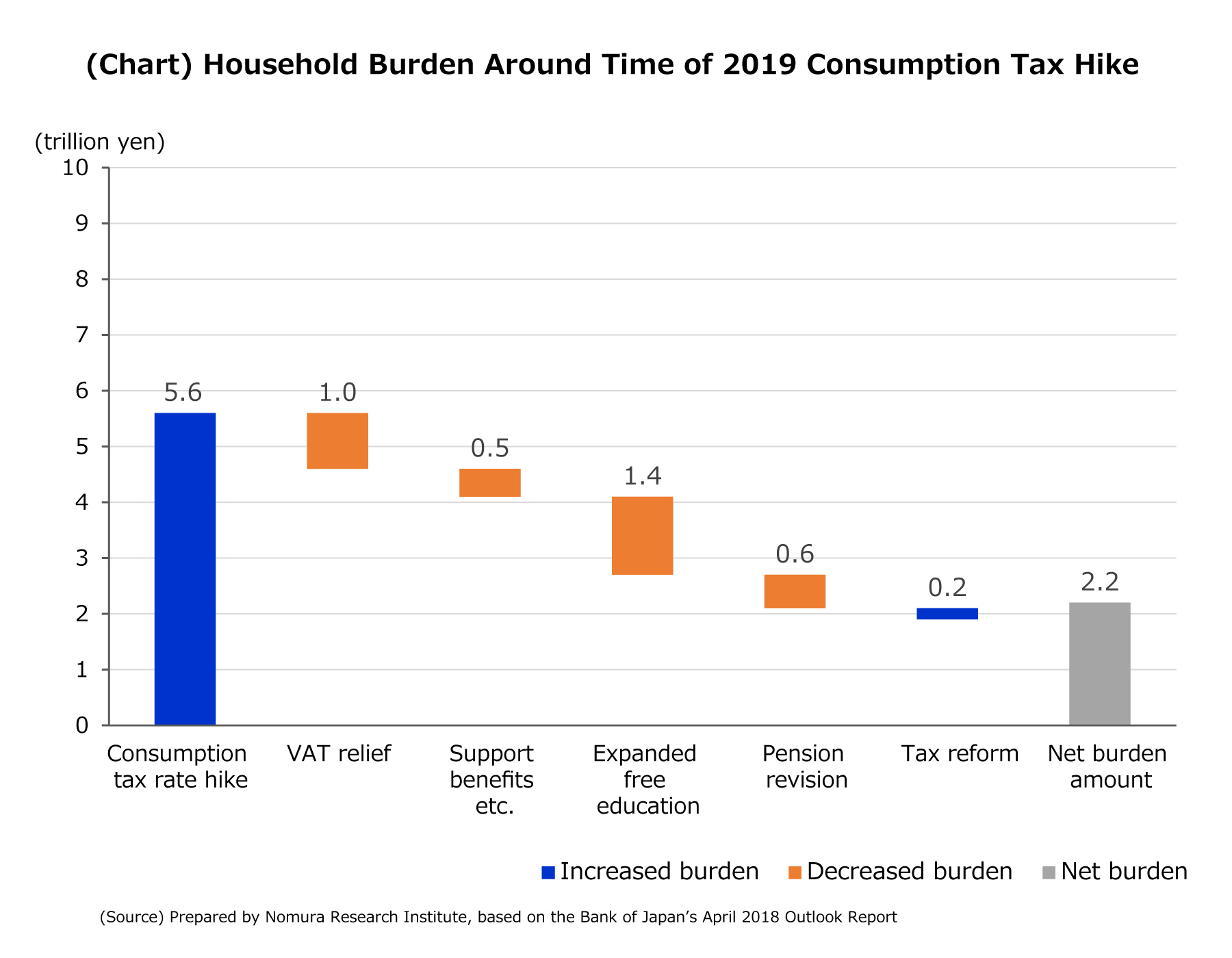