Trade frictions are heating up between the U.S. and China. If the situation continues to deteriorate, it may give a severe blow to the global economy.

On July 10, the Office of the United States Trade Representative (USTR) published a list of an additional $200 billion worth of Chinese goods that are facing tariffs. The release of the list came after the U.S. on July 6 started levying tariffs on $34 billion in Chinese products out of the $50 billion worth of goods that had already been targeted, and China immediately announced plans to hit back with retaliatory duties.
Earlier, President Trump had said that if China took retaliatory measures, the U.S. would slap tariffs on an additional $200 billion worth of goods, and if Beijing hit back with further retaliation, duties would be imposed on yet another $200 billion—meaning a total of $400 billion in goods from China could face additional tariffs of 10%. That would mean most of imports from China—$505 billion in 2017—would be subject to duties.

American consumers to be hit

The important point here is that if the Trump administration goes forward with the planned $200 billion in additional tariffs, this will likely hit U.S. consumers hard as well. Under the $50 billion in tariffs, the Trump administration made sure the measures will not significantly impact American consumers, keeping consumer goods to just 1% or so of the tariff list.
However, consumer products are the type of goods that make up a large category of items the U.S. imports from China, including cell phones, computers, apparel, and toys/games. If the tariff list expands to $200 billion, it would be impossible to exclude consumer products. Indeed, the list in USTR’s 200-page report includes such items as baseball gloves, handbags, dog collars, and digital cameras.。

An OECD analysis found that if the U.S., Europe, and China each raised tariffs on goods by 10 percentage points, this would reduce global exports and imports by 6% each and push down global GDP by 1.4% (see graph). Moreover, supposing that global demand weakens by 6%, an estimate based on the Cabinet Office’s ESRI Short-Run Macroeconometric Model of the Japanese Economy (2015 Version) shows that Japan’s GDP may decline by about 1.9% even though the country is not part of the U.S.-China trade dispute.
If that happens, the global economy, including Japan, would likely enter a recession. This is why there is no doubt that further escalation of the trade war between the U.S. and China would pose a significant threat to the global economy.

Outcry within the U.S.

The Trump administration apparently wants to see how China is going to react to the latest $200 billion tariff list, and thus is waiting at least two months before starting to impose duties. It will also solicit comments from American companies and others about the targeted imports, and public hearings are scheduled for August 20-23.
The trade frictions have already dealt a severe blow to American farmers in the Midwest who export soybeans and other products to China. In the auto industry, not only foreign companies but domestic manufacturers are also pushing back against the additional duties on automobiles under consideration by the Trump administration. If the extra measures kick in, American consumers are certain to be battered this time.
Let us hope that strong protest from U.S. corporations, farmers, and consumers will put the brakes on the Trump administration's policy that is heating up the U.S.-China trade battles. Falling stock prices due to concerns about adverse effects on the global economy and other reactions in the financial markets may also help nudge the Trump administration into becoming more careful with its policy. Even with the release of the tariff list, at this point it would seem unlikely that the Trump administration will in fact expand the tariff targets to the proposed $200 billion.
However, the trade frictions between the U.S. and China come against the backdrop of U.S. concerns that it might eventually be overtaken by China in terms of economic and technological power, and moreover a heightening alarm that China could gain military supremacy over the U.S. one day. Even if a sudden escalation of trade frictions may be avoided now, it is doubtful that there would ever be an end to U.S.-China trade frictions—so long as China poses economic and military threat to the U.S. 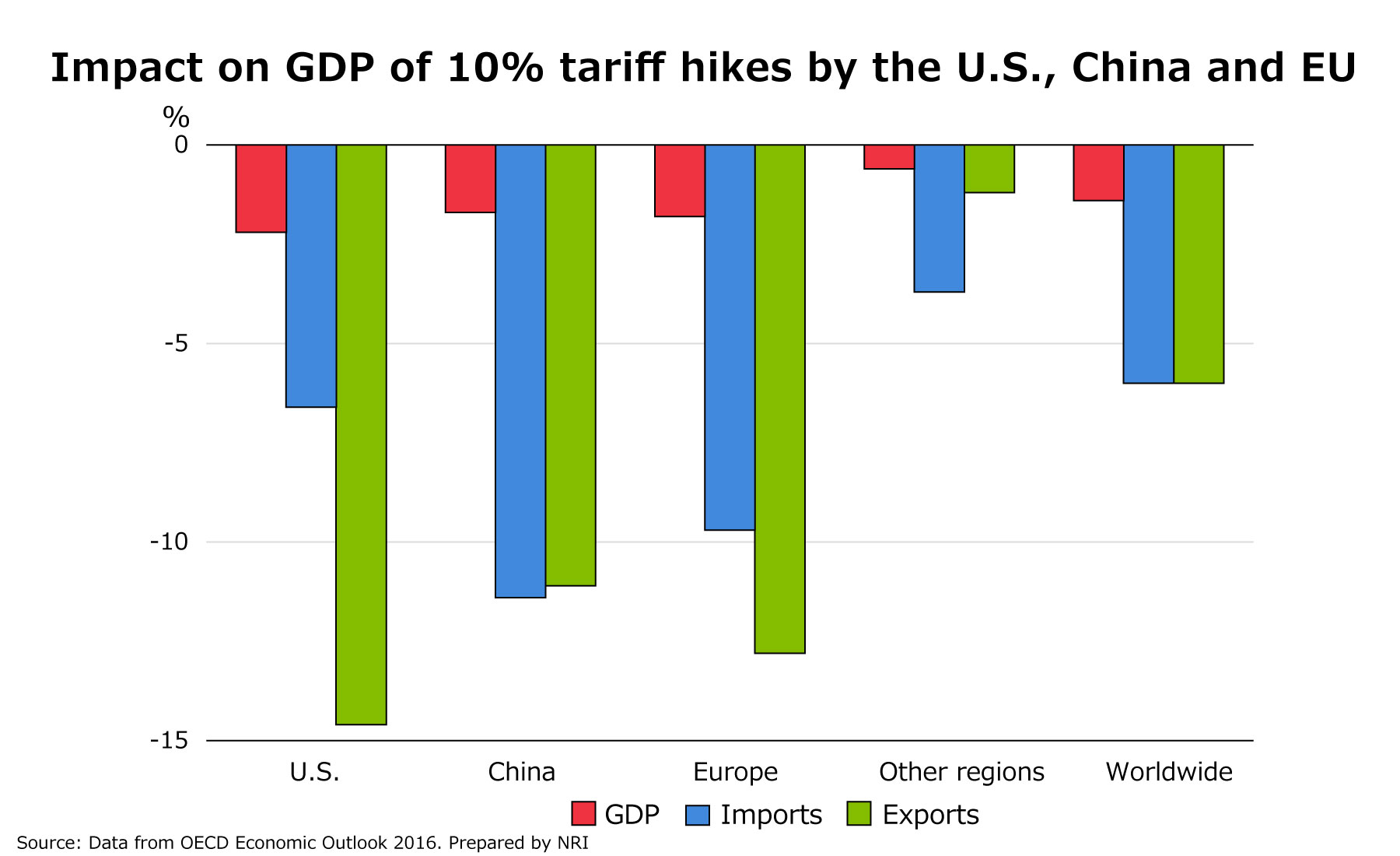