HOME NRI JOURNAL What Does It Take for Open Innovation to Create Successes?

What Does It Take for Open Innovation to Create Successes?

Amid the remarkable advances being made in IoT, AI, and other digital technologies, there is a growing movement headed by large enterprises and venture companies that are partnering together in order to gain a new competitive edge. Its name: “Open Innovation”. However, there are few examples where such collaborations have produced synergies and found real business success. Go Tokushige of Nomura Research Institute (NRI), which has supported the collaborative projects of various companies, is here to explain the challenges involved in Open Innovation and how they can be solved.

The Barriers Standing in the Way of Open Innovation’s Success

In recent years, we’ve seen an explosive rise in the number of collaborations between large corporations and venture companies in the field of digital technology. This is because with the aggressive advances being made in digital tech, in order for companies to launch new businesses and achieve a more sophisticated level of operations, it’s become important for them to rapidly obtain any features they have trouble developing in-house. However, there are seven barriers in the process for pursuing these partnerships (see the chart below). The upper part of the image shows the roles of top management and the barriers standing in their way, with the biggest challenge being “① Fails to Understand the Need to Partner with Venture Companies”. A failure by the management to fully comprehend this need will end up frustrating attempts to pursue a partnership. When I get involved in a customer’s project, oftentimes the first thing I do is to appeal to the top management to get them to understand their role in this. Once the top managements tell employees on the ground level in their own words what the company vision is, an organization will get ready for pursuing the project.

Numbers ④ to ⑦ in the graphic represent the barriers faced by those on the ground who will actually be moving the project forward. Among these, “⑤ Negotiate Contract and IP With Partner” is the point that most readily leads to various problems. For example, an AI owned by a venture company is made to learn a huge amount of data owned by a large corporation, and this produces an outstanding AI. At that time, an intellectual property battle could erupt over where that outstanding AI really brings to. To overcome this barrier, you need to have solid negotiations and contracts from the initial stage where you first consider the collaboration. There still aren’t many examples of companies that have cleared these numerous barriers and achieved real business synergies. 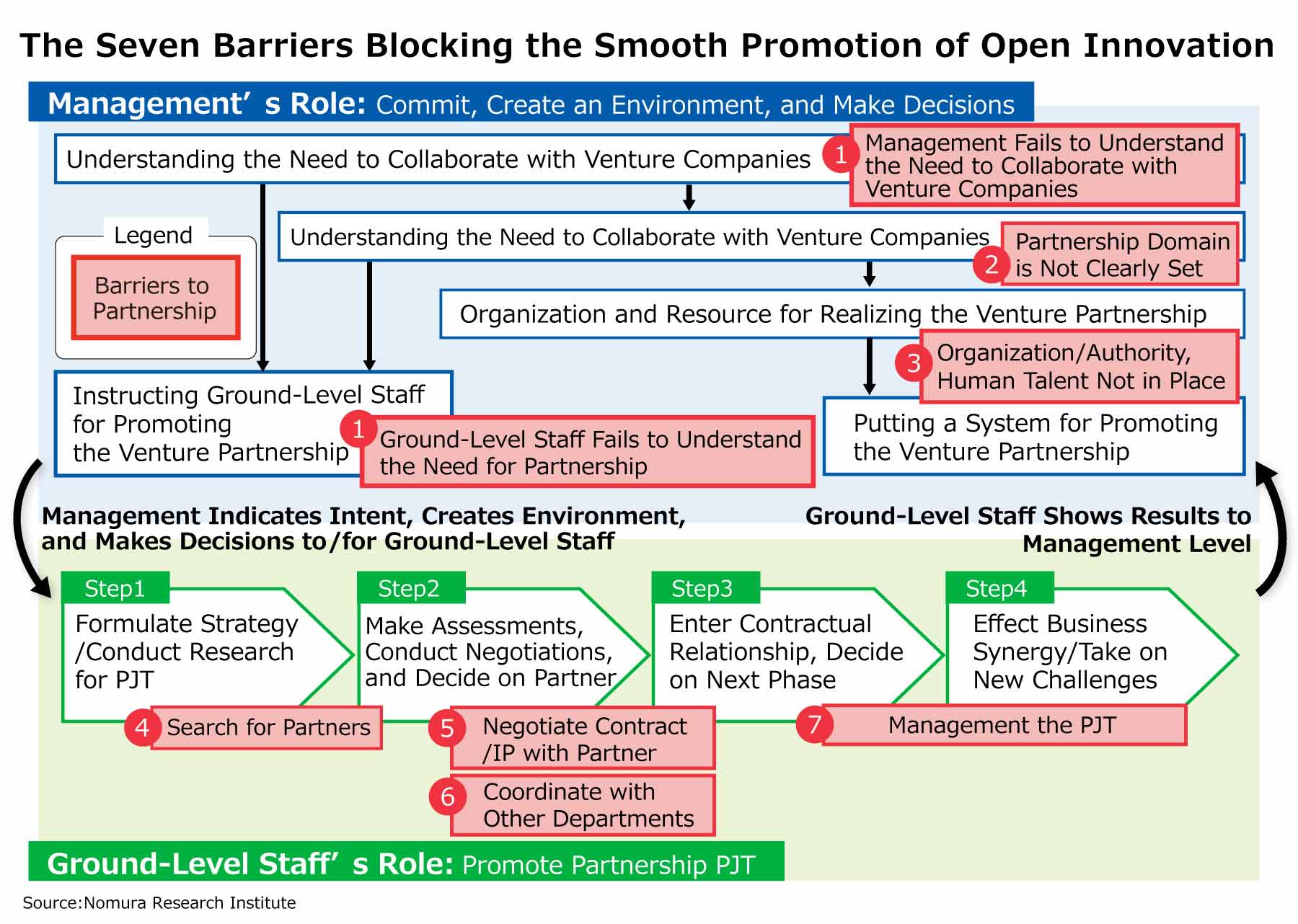 Breaking Away from Mere Imitations of the Silicon Valley Model

In Japan we also see acceleration programs where corporations solicit proposals from venture companies, as happens in Silicon Valley. Yet to date, there haven’t been many successful cases of this activity. What is the root cause behind this?

When we look at their presentation scenes, we see that although Japanese companies will imitate the style used in Silicon Valley, such as having a casual dress code or conducting negotiations over pizza, ultimately their attempts fail even to reach the stage of a PoC (proof of concept), let alone actually launch new businesses. This is because when the large Japanese corporations feel a match-up didn’t work out on a given occasion, they tend to end things. If you have a goal to truly achieve, even if it didn’t work out this time, you will consider what should be done next. And it also happens sometimes that when a company is ready to actually move forward with a partnership, it doesn’t have an adequate strategy for what it wants to achieve or what kind of process is needed. We Japanese tend to think in terms of the “how” rather than the “why”, so even when we’re looking to Silicon Valley for examples, our focus tends to stick to the details of the methodology. We need to conceive of things more from a “why” standpoint.

Combining the Two Approaches of Deduction and Induction

When moving ahead with the process, a deductive approach and an inductive approach could be used. The deductive approach involves following a syllogistic method, ascertaining the market’s needs, identifying potential markets and challenges, and thinking up actionable business models. Conversely, an inductive approach might entail pulling together a number of ideas—for instance, having your team assemble a list of venture companies that your company can work with in providing community support services—and deriving a single conclusion from that group.

Here’s a problem that often arises: you’ve got a setup where a large corporation is providing the big data while the venture company is providing the AI, but then in the phase for conducting user tests that bring the two together, the interface design or system integration can’t be accomplished easily. Problems like this where the attendant resources can’t be marshalled often end up being a blind spot when large corporations and venture companies are pursuing a partnership, and they can lead to bottlenecks. It’s unfortunate when this brings a project to a standstill.

Solving this type of problem is NRI’s specialty, and I believe there are many cases where we can help. At the stage where a large corporation and a venture company have come up with a proposal for their collaboration, we would bring in our players who can readily implement the interface design or the system integration and run through a high-speed PoC. This is the sort of innovation promotion that only NRI can provide, given that we’re a consulting firm as well as a system integrator. We’ve accumulated achievements of innovation promotion in the field of digital technology especially.

I have a feeling that it won’t be long before Open Innovation projects by large corporations and venture companies start to produce results. And I will continue to devote my energies in supporting these collaborations so that we’ll eventually see many successful examples.

What is NRI Principal?

NRI boasts its Principals holding high level of expertise in specific markets or solutions. NRI Principals, also as leading consultants, have played roles to lead innovations for society and clients to success.