Era of “nonmarket strategy” experts: New ideas to transform the business environment are the key to overseas expansion

The idea that companies should not aim for profits alone but should also address social issues is becoming a worldwide trend, as seen with the United Nations establishing a consensus on “Sustainable Development Goals” (SDGs) for resolving social issues. In this environment, the importance of “Nonmarket Strategy” to reach out to governments and citizens is increasing. It is fast becoming an important subject at public policy and management schools in the United States, and Keisuke Mizunoura and Kazuhiko Komamura of Nomura Research Institute (NRI) point out that it is time for it to be seriously studied in Japan as well.

Creating a favorable environment on one’s own

Mizunoura: When companies develop their market strategies, they analyze the business environment and think about how to outshine the competition and provide better products and services to their customers. To achieve this, they try to create a business environment of laws and rules favorable to their own business through strategic lobbying, which is known as nonmarket strategy. 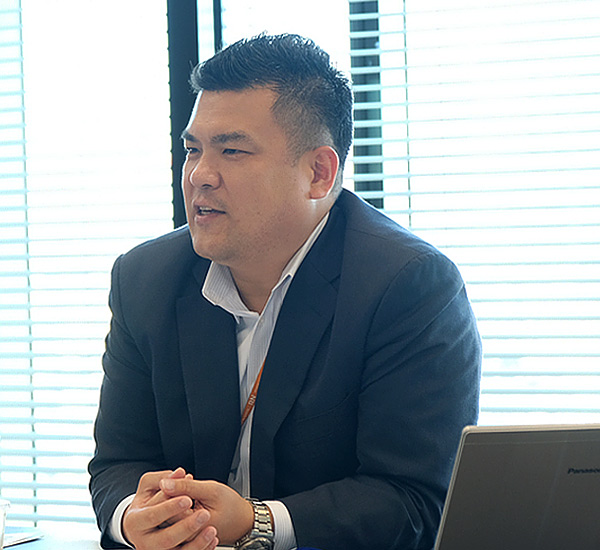 Komamura: In conventional market strategies, the stakeholders for a company are mainly considered to be their customers, competitors, and suppliers, but nonmarket strategies include a wide range of stakeholders ranging from governments to media, the general public, and NGO/NPOs. Nonmarket strategies feature an offensive aspect, which involves creating favorable conditions for one’s company by creating and changing legal systems, rules, mechanisms, etc. and establishing allies and fans, as well as a defensive aspect, which includes preventing problems from occurring and minimizing their impact on business.

――What are the problems that could occur if nonmarket strategies are not strong?

Mizunoura: As Japanese companies are “conscientious”, they are reluctant to enter into untapped markets due to undeveloped, ambiguous laws related to their desired business. Meanwhile, the lead is taken by European, Chinese, and Korean companies, and they end up losing to them. If proper legislation is necessary for business expansion, it becomes important to encourage the government of that country to create rules, involve organizations like JICA (Japan International Cooperation Agency) or METI and other competitors, and promote Japanese-style mechanisms in the form of “technical cooperation”. It is easy to think that business environment maintenance is the preserve of a country or an industry group, but various initiatives are possible even at the level of an individual company. 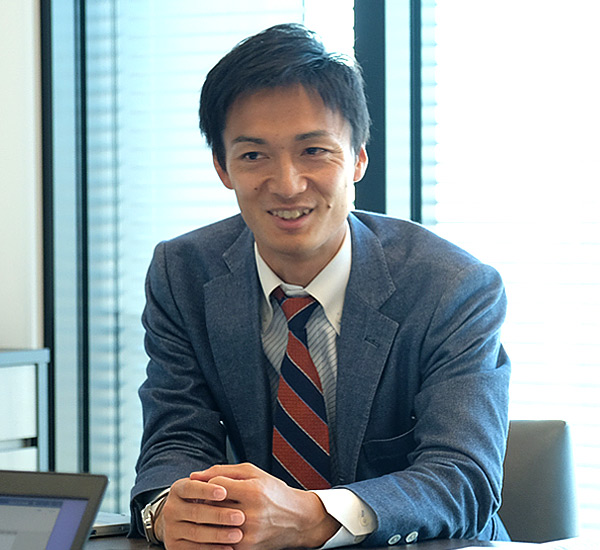 Komamura: Nestle and Starbucks provide good examples of well-implemented nonmarket strategies. For example, with the certification of a third-party organization, they are actively supporting everything from production to import of cocoa beans and coffee beans while taking child labor issues into consideration, and are using this as a selling point. However, these activities are not considered to be part of CSR (Corporate Social Responsibility) or publicity activities, but are considered to be fundamental elements of management strategy. As a result, they can take up more in-depth initiatives involving the entire supply chain, such as procurement mechanisms or pricing. Thus, the companies are increasing their fan base, improving their brand power, and creating an environment where they can differentiate their products over the mid- to long-term.

――How should one start examining nonmarket strategies?

Komamura: 3C (Customers, Competitors, Company) is a popular market analysis model, but for nonmarket strategies, analysis of the company’s environment from the 4I perspective makes it easier to consider concrete actions. The first step is to think about the ideal position of the company in society and take stock of the Issues that are likely to be relevant, such as global warming, tax increases, and wages. Align these issues along a time axis and analyze their priority and extent of impact on the company. Next, ascertain the legal systems and Institutions that influence each issue. Furthermore, after organizing the Interests (players) that have a stake in these issues, study the kind of Information that the affected parties would focus on. Then, based on this, determine whom to work with and how to work with them. 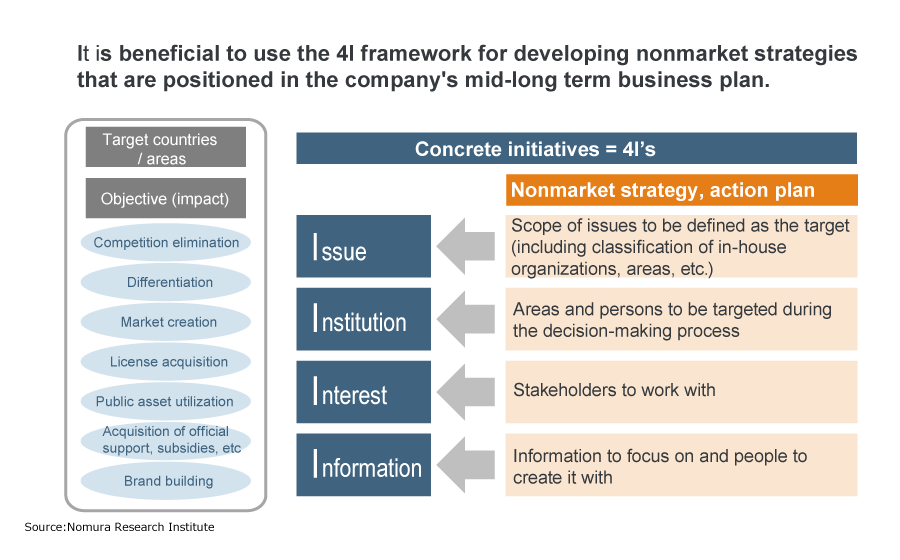 Company-wide strategies rather than partial activities

――How do you think companies should work on their nonmarket strategies in the future?

Mizunoura: With SDGs and ESG (Environment, Society, Governance) receiving much attention, nonmarket strategy activities are being given more importance. This does not mean that companies have to start something new from scratch. There is a need for the company as a whole to connect traditional one-time lobbying activities with individual public-private partnerships and creation of standards at overseas bases, and to work in a more impactful way.

Therefore, it is best to decide on a department to control the entire business with the understanding that it is a management issue, and to purposefully proceed with the formulation and promotion of nonmarket strategies. Compliance is important, but in a global environment, it is necessary to have an "aggressive" idea of proactively creating and changing rules, regulations, and mechanisms according to the circumstances.

Komamura: Historically, the management philosophy or mission statement of Japanese companies has been to “contribute to the development of Japan”, and employees have agreed with this as well. Thus, I think Japan is a country with a very strong culture of social awareness. The idea that it is essential for a company to have a sense of social purpose in order to be able to grow continuously perfectly fits Japanese companies, and can even be said to be their specialty. Having a well-designed corporate image and strategy is an important step towards growth and success. Through our consulting services, NRI hopes to support the global expansion of companies in terms of non-market strategies.