HOME NRI JOURNAL What is a Successful “aaS” (as-a-Service)?

The term "as-a-Service," such as SaaS (Software as a Service) and MaaS (Mobility as a Service), has become a recent buzzword. Business models are shifting from providing goods to providing services, and these are collectively referred to as XaaS (Everything as a Service). At the NRI Dream Up the Future Forum 2018, we explained the shift towards aaS occurring in various industries. Here, Shohei Ishiwata, Yukio Shigeta, Hiroshige Muraoka, and Junichi Yoshida again come together to share their views on XaaS.

The difference between commuter passes and XaaS

One of the characteristics of XaaS is that it is a subscription-based or continuous billing model. In Finland, for example, a service called "Whim" is being implemented as a MaaS trial. This allows unlimited rides on buses, trains, and taxis in the city of Helsinki for a monthly fee of several tens of thousands of yen.
However, we can say that the conventional commuter passes for buses and trains also provide all-you-can-use services at a fixed price. Hence, purely on the basis of the form, the commuter pass service may also be called aaS. So, what is the difference between the two?

One criterion for determining whether a service is XaaS is its regularity of contact with customers. For example, take the case of sightseeing tour tickets. After a customer purchases the ticket, he or she simply has to present it at the entrance gates to be able to freely ride trains and buses or get a discount on the admission fee for a tourist attraction. However, although the issuer knows how many passes have been sold, it is not possible to know how many people actually used the passes or on which routes and how often they were used. In the case of Whim, the app records the boarding/alighting location data each time it is used, so data can be obtained for every instance.
Of course, commuter passes are now digitized and usage history is available. However, aaS is not merely a question of adoption of IT. What is provided as a service is not only its "use" but also "value". The commuter pass only sells the service of “movement” (use) from one station to the other. On the other hand, MaaS can offer services such as suggesting routes with shorter walking time during bad weather or routes with cafes along the way when your appointment is after an hour. In fact, Whim is trying to sell the "utility" (value) of freely moving around the city. 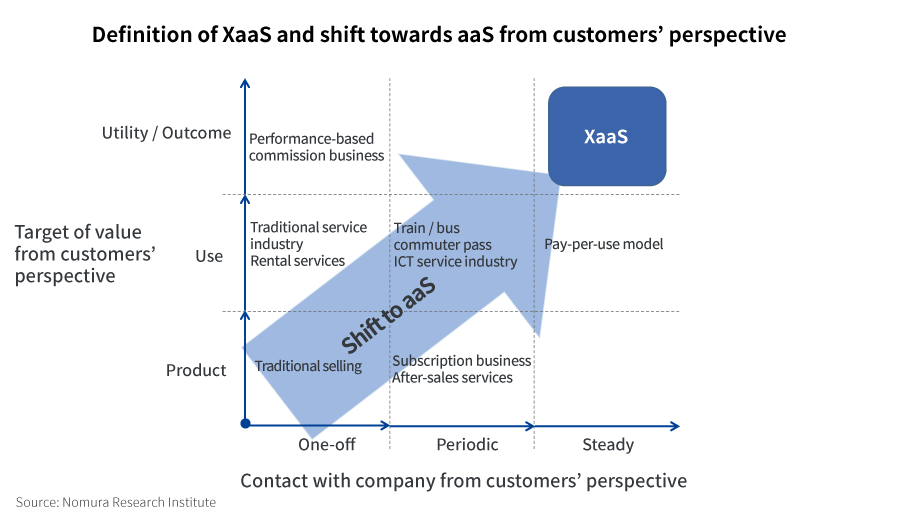 What data is required to realize XaaS?

Next, let us consider the conditions under which XaaS can be realized. First of all, it is very important for a company to deeply understand its customers. For example, when water is provided, its “use” (drinking) is the same but its “value” (quenched thirst, feeling calm, etc.) varies from person to person. If we try and understand the true value of something for a person this deeply, we will need to be constantly connected and have a lot of data.

Our experience has shown that the difference in the amount of data required for one-off, periodic, and steady businesses is about 1:10:1000. From the viewpoint of the customer’s perceived difference in value between the "product" and "utility/outcome", if we set the value of the product at 1, then the value created by utility/outcome is around 100. We believe that aiming for XaaS and DX (digital transformation) to create this value can have an unprecedented impact.

However, it is necessary to determine how much data to collect for a particular business. For instance, even if it is technically possible to obtain data once a minute, it may not be necessary to collect such detailed data for cases when the machinery or equipment we are handling comes with a service life of around ten years and a maintenance period of once every 3 to 6 months.

For example, as apartment managers have routine contact with their users, it is possible for them to keep track of changes in residents (such as families moving in/out or additions to the number of family members) by monitoring the water and electricity usage. However, they must consider whether it is necessary to do so, since changes in resident status can be easily captured by alternative methods, such as by analyzing images from security cameras or conducting annual surveys.

Rather than aiming for XaaS as the ultimate goal, it is important to identify the specific businesses to be transformed

As with Alibaba and Google, one business strategy is to make large-scale investments and constantly acquire a large quantity of data. However, most Japanese companies cannot follow this. Rather, it is important for them to think about the necessary data and methods to acquire it based on their specific objective. Rather than simply digitalizing or changing the traditional system of selling or billing, companies should seriously reassess their value proposition and redefine their business. We believe that this will be the determining factor in making an essential XaaS.

Important to measure and increase value

Many Japanese companies have become accustomed to a pricing model that calculates profits on the basis of production costs. However, this may not necessarily be commensurate with the value that can be achieved with XaaS. To promote value and utility, it is essential to quantify and measure the value perceived by the customer. By combining conventional performance data such as CS (Customer Satisfaction) questionnaires with indicators such as analysis results of usage logs / usage patterns and NPS (Net Promoter Score), which measures customer loyalty and confidence in companies and brands, we will be able to measure the utility and value of services and implement measures to increase customer value. We believe that the transition to DX 2.0* will be further accelerated if we can better use technology to measure and enhance customers’ perceived value.