Information Security as a Management Strategy in the DX Era

NRI Secure Technologies, which is a group company of Nomura Research Institute (NRI) and responsible for the information security business, has been conducting a “Fact-Finding Survey on Information Security in Companies” since FY 2002-03. This time we have compiled the results of our latest survey conducted on the theme Security as a Management Strategy. Yasuhiro Nabei, who is a security consultant at NRI Secure Technologies, outlines the survey results and the challenges that Japanese companies face in promoting digital transformation (DX). 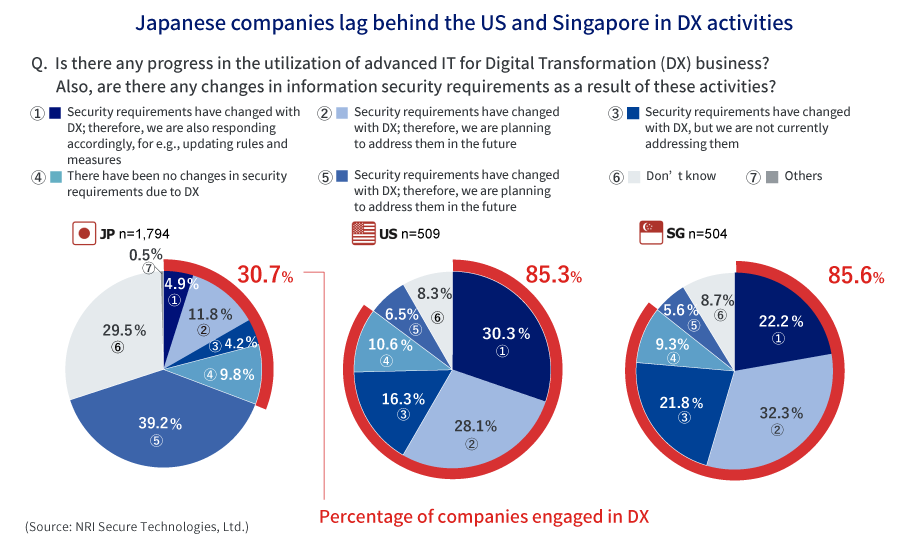 Regarding companies’ efforts towards digital security, Nabei mainly focusses on the advanced security solutions that are adopted in relation to DX. He pointed out that while Japanese companies are introducing and examining information security measures related to DX 1.0, which contributes to transforming business processes, the security measures related to DX 2.0, which transforms the business completely, are not as advanced as DX 1.0. The number of companies working on DX in Japan is increasing, but they seem to have transformed only their business processes and may not have yet transformed their businesses.

Lack of information security personnel is becoming a serious challenge for Japanese companies. The survey results show that only 9% of Japanese companies feel that they have adequate information security personnel, while it is over 80% in both the United States and Singapore. Nabei says that Japan alone is overwhelmingly complaining of shortages in human resources and that a similar trend is seen every year.

The type of human resources that were most commonly in short supply were staff for formulating information security strategies and plans. Nabei says, “In order to formulate information security strategies and plans, it is necessary to identify risks specific to the company's businesses and develop resources within the company to handle those businesses."

"Many companies responded that they do not have sufficient resources to assess and investigate information security risks and monitor and analyze logs. However, these are expected to be automated by outsourcing or using tools. In order to eliminate the shortages of human resources, it is important to clarify the areas that will be handled by in-house resources and those that will be handled by outsourcing or using tools."

Based on the results of the survey, Nabei expressed his concern that insufficient knowledge about information security may affect the competitiveness of Japanese companies.