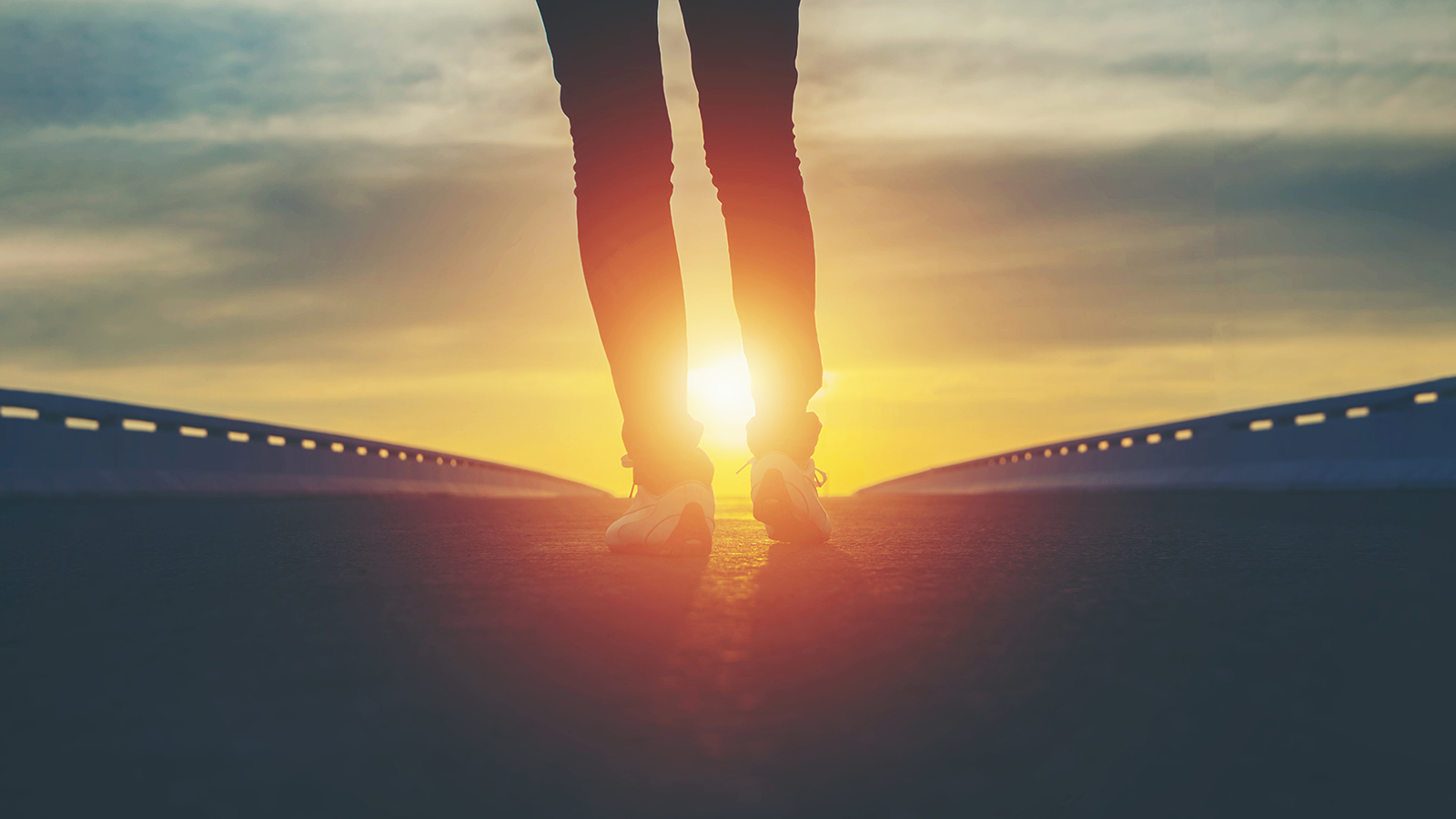 With the declining birthrate and aging population and major changes in the economic and social environment, the life course of an individual (the path an individual follows through his or her lifetime), which has been a basis for various social structures, has transformed significantly. The various surveys conducted by Nomura Research Institute (NRI) have also revealed the changes in the life course that have occurred over the past few decades and the "constrained condition" of the working generation. We spoke with Kana Takeda of the Center for Strategic Management & Innovation, who is involved in research and analysis of the situation to find a solution for the "constrained condition" of the working generation.

In May 2019, NRI conducted a "Survey on Married Couples’ Life Events" targeting approximately 3,700 people nationwide. Based on the results of the survey, we conducted a comparative analysis of the current working generation (households consisting of a husband, wife, and two children) and that of 35 years ago, focusing on the age of the men during various life events. As a result, we realized that their average age increased by 2.9 years for marriage, 3.3 years for the birth of the first child, and 4.6 years for the completion of the second child’s education as compared to 35 years ago.

If we assume the retirement age to be 60, the average household model 35 years ago was that the age of the working generation was 53.4 when their second child graduated and the home loan was paid off 3 years before the retirement age. However, the average age of the current working generation is 58 when their second child graduates from college, and their home loan is paid off almost at the same time as when they retire.
If the period from marriage to the end of the child's education is defined as "the period of family formation and children’s education" and the period from the end of the child's education to the retirement age is defined as "preparation period for retirement", the whole period of family formation and education has been delayed and lengthened as the age of marriage and childbirth has increased. The preparation period for post-retirement, which can be seen as a period of focusing on asset formation for the post-retirement life, has also been shortened by nearly 5 years, from an average of 6.6 years 35 years ago to 2.0 years now. As this time has become shorter than in the past, we can conclude that post-retirement assets are not being sufficiently built.
Furthermore, life expectancy after retirement has increased to 23.5 years now, approximately 4 years longer than it was about 30 years ago. If we assume that the working generation 35 years ago had a balance between "preparation period for retirement" and "post-retirement period", then it is clear that the current working generation has fallen into an imbalance where the prolongation of the "post-retirement period" has led to a shorter preparation period and a longer post-retirement period. 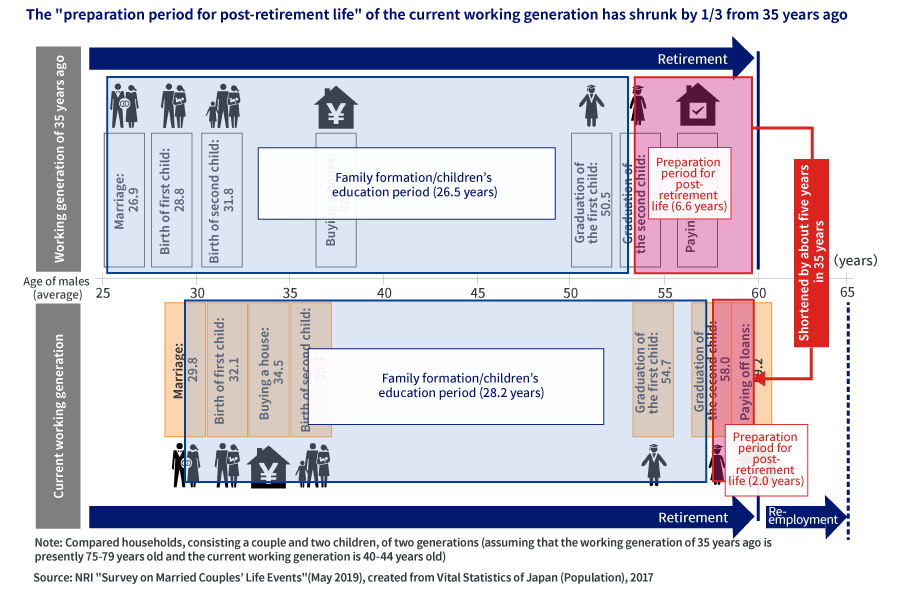 Economic instability a major reason for the declining birthrate

Although declining birth rate has long been a social problem in Japan, many working-age people want to have more children. According to NRI's "Questionnaire survey on childcare services" conducted in March 2019, a majority of mothers with preschoolers want to have another child.
However, when these mothers were asked about the obstacles they face in realizing this, the most common answer was “significant burden of educational expenses”. This suggests that there is an extremely strong sense of economic instability in raising children.
The monthly household income peaked in 1997 and has been decreasing since then, and in 2017 it was around 14% lower than 20 years ago. Against this backdrop, the number of double-income households is increasing, but in many cases, either the husband or the wife or both are part-time employees, which is insufficient to resolve economic concerns.
Here, we have named the condition of the current generation of working people as the "constrained condition", referring to the situation in which families are forming amid a shrinking preparation period for retirement and lack of financial certainty. The constraints which emerge from the insufficient preparation for retirement due to the delay in family formation or the extension of the children’s educational period give rise to uncertain future, whereas declining and unstable income gives rise to present instability. These factors work as hurdles for the current working generation.

Three reasons for the "constrained situation" of the working generation

If the current working generation, who is the future of Japanese society, remains in the constrained situation, Japan will face three major problems.
Firstly, the birth rate will continue to decline because it will be difficult to have the desired number of children, resulting in an inevitable decline of the population (increased risk of the declining population). Secondly, strong economic instability will suppress expenses (consumption) of the working generation and the overall financial activities of the society will become stagnant (suppression of overall financial activity). Thirdly, the constrained situation of the current generation is not addressed, i.e., discussions on social security are based on the life events of the previous generation, and there is no consideration of how to provide most appropriate social security for the current working generation, whose life events have undergone significant changes (delay in very important discussions on social security).
Liberating the current working generation from a "constrained condition" will lead to the development of Japan's economy and society. It can be considered one of the most important issues for building a sustainable nation. We are hoping that the results of our survey will serve as a foundation for concrete discussions on this issue to proceed on a national level.

For redesigning social mechanisms, we must continue to consider two essential factors: changing the definition of working generation by companies and government according to the life events of the current working generation, and creating an environment for double-income 2.0 households to increase, which will lead to stable financial conditions.
Compared with 35 years ago, the "working period" has changed significantly. It is important to consider how companies and the government can support this change. Companies need to review their working periods and work styles in accordance with the life events of the current working generation. However, there are limits to the extent and amount that companies alone can take on. For example, it would be effective for the government to review the timing and balance of social security benefits and burdens and assemble a set of corporate treatments and governmental benefits and burdens to eliminate the financial instability of the working generation. In other words, the government should immediately consider reviewing various systems (social security, tax system, etc.) following the life events of the current working generation.
In addition, the dual-income system, in which both husband and wife have a stable job and income, is called "double income 2.0." If the working generation desires, I hope that the government and companies will actively invest in the creation of an environment that facilitates the realization of this double income 2.0. For instance, one necessary improvement is to ensure that mothers who are willing to work can access childcare services. It is also necessary to promote sufficient after-school childcare centers, workstyle reforms, and changes in the mindset and behavior of both men and women.
It is important to implement all of these measures as soon as possible to liberate the current working generation, whose circumstances have changed significantly compared to the past, from the current "constrained condition".

The birth rate will rise to 1.8 with the realization of "freedom from constraints"

From the perspective of the birth rate, interesting results have emerged about the kind of future that lies ahead if the current working generation is liberated from constraints.
We realized that we can expect a birth rate of 1.78, based on a comprehensive calculation of the proportion of mothers who want to have another child and the feasibility of having enough childcare services through the survey. Coincidentally, this figure is very close to the national target of 1.8.
According to the estimation of the National Institute of Population and Social Security Research, if the birth rate rises to 1.8, the total population of Japan in 2065 will be 100.45 million (thus maintaining a population of 100 million). It is expected that the population of young and working-age people, which is currently expected to decline, will increase, and the balance of the population pyramid will improve.
As the working generation plays an important role in realizing a society where all generations can live with peace of mind, the entire country must pay close attention to their constraints, and consider reconstructing society so that they can be liberated from these.