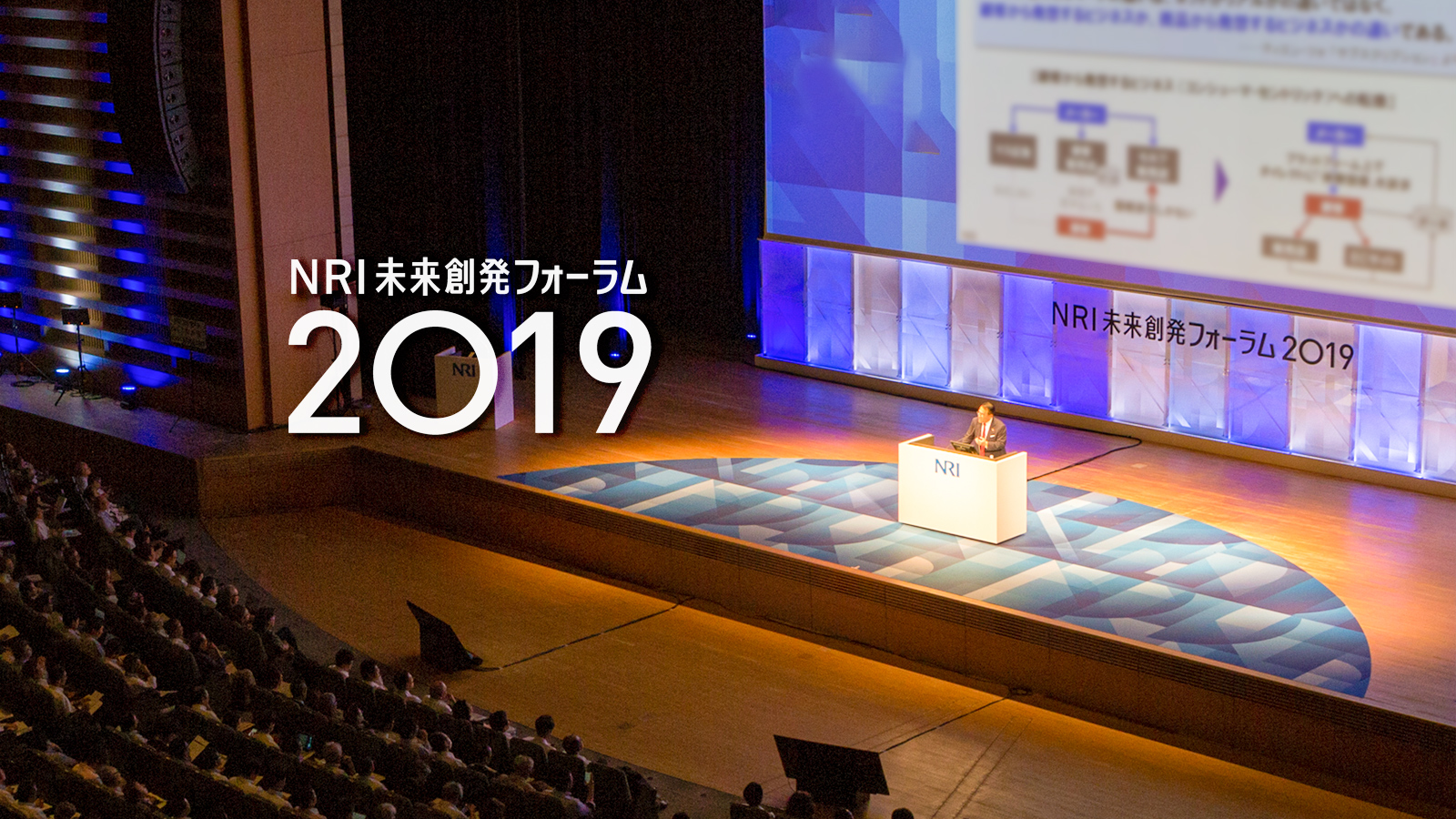 The Direction Countries and Companies Should Take in the Digital Era: NRI Dream Up the Future Forum 2019

On October 2, 2019, Nomura Research Institute (NRI) hosted the “NRI Dream Up the Future Forum 2019”. We have been holding this three-year series since 2017 under the theme “Digital opening in the near future” to discuss the future of Japan and the rest of the world and the direction of corporate management in the era of innovative advancement in Digital Transformation (DX).
This year, as a compilation of the three-year work, we looked at the economic and social landscape in the digital era. Based on discussions with NRI experts, we then proposed the direction that the government and companies should take for resolving corporate management issues.

“GDP + i”, a new economic indicator for the digital era

At the beginning of the forum, NRI President and Chairman Shingo Konomoto gave a keynote speech entitled "Declaration of Digitalization of Society and Industry."

In Japan, while real GDP growth rates and scheduled wage levels have been sluggish since the 1990s, consumers' subjective feelings about their daily lives have improved since around 2006. Besides, the results of the “Questionnaire Survey of 10,000 consumers” conducted by NRI indicate that consumers who make good use of digital services are more satisfied with their daily lives. The “consumer surplus” created by digital platforms, such as free digital services and experiences provided through digitalization, is expanding.

Because the consumer surplus does not materialize as actual money in circulation, NRI views it as a conceptual imaginary number “i”, and proposed an index that combines this with GDP as "GDP+i", a new index that more closely reflects the economic activities in the digital era.
President Konomoto emphasizes, “GDP represents material satisfaction and consumer surplus represents mental satisfaction. Mental satisfaction is seen as something that is created through new values that cannot be experienced in the real world. In developed countries, the degree of progress in the digitalization of society tends to be more correlated with life satisfaction than per capita GDP. It is necessary to focus more on the imaginary number “i” to make the lives of people more fulfilling."

Also, the EU has an indicator "DESI" (Digital Economic and Social Index), which shows the degree of digitalization in the economy and society of its member countries. NRI's study has revealed that this indicator has a high correlation with the degree of life satisfaction. With DESI as a reference, NRI developed the DCI (Digital Capability Index), which shows the potential of citizens to use digital technology to increase their life satisfaction, to raise the level of life satisfaction “i” and to strongly promote digital technology in the country. NRI’s estimation for 31 prefectures indicates that life satisfaction by prefecture has more correlation with DCI than with average income.

One of the means for improving life satisfaction is to digitalize government services and establish a "Digital Government" that will ensure the provision of appropriate services to each individual.
In terms of regional revitalization, cities with a population of around 100,000 people, where citizens, governments, businesses, and academic institutions are all in place, have the potential to achieve urban productivity and civic wealth through digitalization. We can see the beginning of efforts towards digitalization in several metropolitan areas, such as Tsuruoka City in Yamagata Prefecture.

Currently, global data traffic is increasing steadily, but if we estimate the present value of the data provided by consumers, we are not generating enough consumer surplus to keep up with the increase in the volume of data. Many companies are promoting DX to transform their business model, but the results are still not up to the mark. Under the leadership of the management, we need to further refine our marketing strategies to continuously create experience value for customers.

President Konomoto concluded by saying, "NRI will support initiatives for regional revitalization and companies through digitalization. Through its three-year research, NRI has come to strongly believe that digitalization is essential for enhancing the quality of life for every citizen." 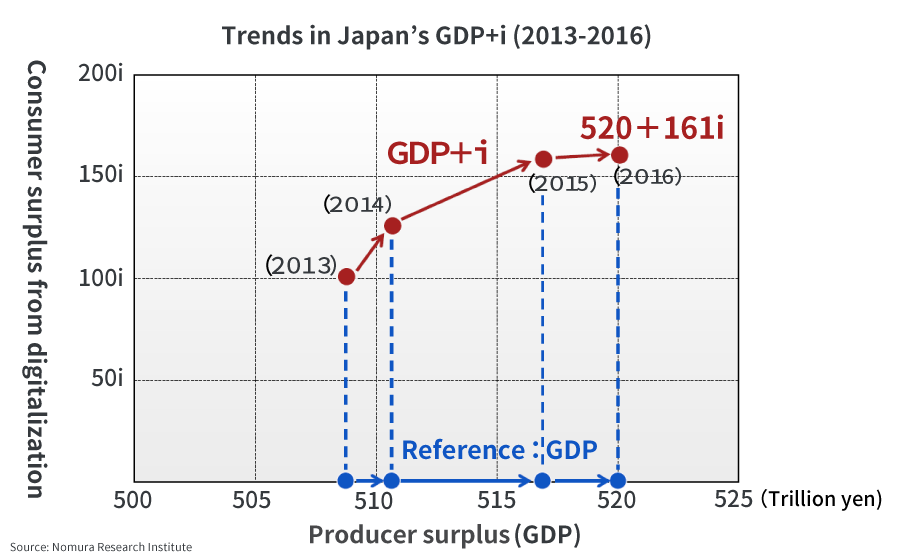 The extent of digitalization of an enterprise can be measured based on two scales: "digital capability", which improves customer experience (CX), business processes, and business models through digital technology; and "leadership ability", such as transformational vision, employee engagement, governance, and IT-Business alignment. “A Digital Master is a company that excels in both of these areas and has undergone digital transformation, and sales per employee and profitability is higher than that of its competitors."

MIT and NRI conducted a survey of 165 Japanese companies. It was compared with a survey of more than 900 companies worldwide, and it was reported that "Japanese leaders rated their companies at par with rest of the world in terms of leadership capabilities but had a lower rating for digital capabilities, especially CX.” Mr. Westerman explained his hopes for the digitalization of Japanese companies by saying, "To improve CX, it is important to build upon trial and error. DX should be a core competency of a company that wants to become a Digital Master".

Finally, economic newscaster Ms. Maoko Kotani, who was invited as a moderator, held a panel discussion with three NRI experts on "What course should Japan take in the digital transformation era?"

According to Makoto Shirota, a researcher on advanced technologies and businesses, "Banking and retail industries, in particular, are experiencing rapid digitalization and significant changes. If they don’t take any steps, they are highly likely to get eliminated.” He further continued, "It is high time for Japanese companies to consider digital expenses as an investment rather than costs. In the future, it will be necessary to shift to a business model that emphasizes CX, and to do so, it is important to set "digital KPIs" for the number of users of our digital channels and sales through digitalization, and to advance discussions which involve managers."

Mia Matsuo, who assists manufacturers in developing and implementing management strategies, said, "Many Japanese companies feel that they lag behind their western counterparts in U.S and Europe in terms of their efforts to digitalize, and want to promote digitalization while continuing their operations, but they often fall short in fundamental areas, such as in-house proposal opportunities and the quality of proposals." She went on to note, "In the case of digitalization, the challenge is the mindset of the key decision-makers. To lead the way in digitalization, it is important to have a person from top-management who can mobilize human and financial resources, take ownership, design measures for digitalization, and to assign human resources with the excellent problem-finding capability to digitalization measures."

Fumihiko Kamio, who specializes in urban and regional strategies and public policy, emphasized, "Japan’s digital development is still low compared to developed countries in the West. For digitalization to be effective, it is important to build a common digital infrastructure by collecting data with the trust of the public and linking it to services and businesses." He added, "The potential for digitalization is high for municipalities*. Particularly, cities with populations of around 100,000 are suitable for digitalization because of their relatively high levels of public confidence, economic efficiency, and administrative efficiency. Digitalization of Japan will be advanced through building citizens-oriented digital governance that reflects the characteristics of cities, and the networking of urban centers with common characteristics."

At the end of the session, the moderator Mr. Kotani concluded the forum by saying, "I hope that everyone who visited will take away some findings from today's lectures and discussions that will help in implementing reforms toward digitalization."