In order for the Digital Transformation (DX) to advance further, the circumstances demand greater visualization of data and greater sophistication in business operations. The problem posed here is what is to be done about the division of information within companies and the use of antiquated legacy systems. There is also a need to develop more advanced ERP (enterprise resource planning systems), which are essential for daily operations. We sat down with NRI Hong Kong’s Yoichiro Kato, who has been involved for many years in corporate systems development, and asked him about postmodern ERP (evolved ERP) and the challenges involved for Japanese companies.

--- Tell us about how ERP systems are being used at Japanese companies.

Looking at the current state of systems deployment at Japanese companies, we see the field clearly divided into the companies that are actively adopting cutting-edge technologies and those that are slow to do so. The latter among these can then be broadly divided into two types. The first are siloed companies, which have homegrown systems that they’ve used for many years for each individual operation. The other type is companies that have adopted ERP packages, but that can’t handle the latest operating requirements because they’re using old versions, so they try to compensate with subsystems or excel-based management. Their sites are operated using excel, which is easy to use, but they’re dependent on individual skills and these can’t be passed down smoothly. This can easily lead to situations where the management can’t immediately obtain the information it wants.

--- Some are of the impression that ERP is difficult to use for exceptional types of processes. Has ERP been evolving technologically?

Conventional ERP has excelled at handling routine tasks, such as order management or bill management. Meanwhile, for operations that involve a lot of irregular patterns, like production scheduling or on-site work performance results collection, for instance, it’s been difficult to handle these with a single package. By contrast, postmodern ERP has the characteristics of being non-unified and flexible. There’s no need to for a single package to cover every operation, as conventional versions have done, and it enables you to adopt a system that’s well suited for any given area, and to use API for interconnecting data. For instance, if the cost accounting function in your company’s ERP is inadequate, you can combine it with another cost management solution and perform detailed analyses. This entails the loose coupling* of a variety of services, meaning a wider range of operations can be handled. 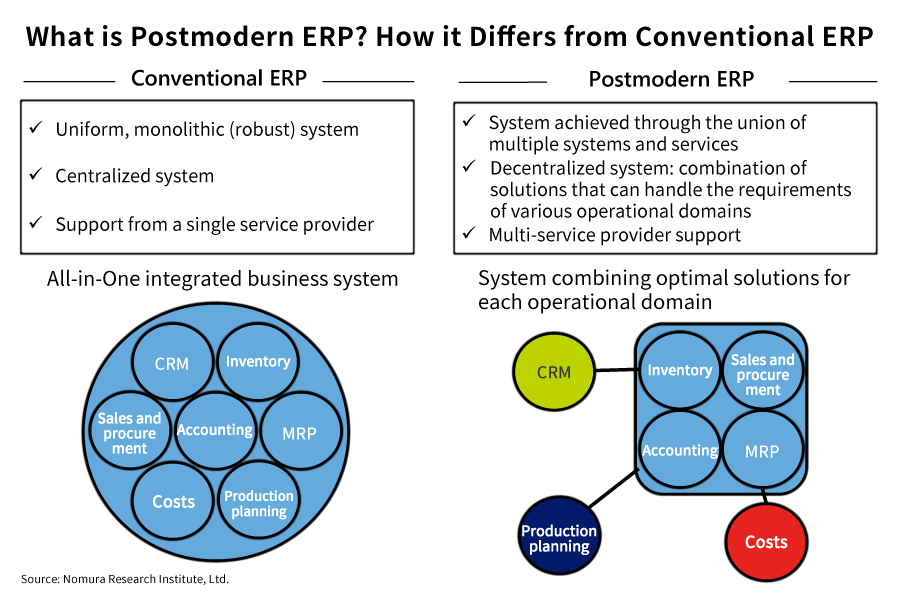 Decision-Making Styles Are a Barrier to Deploying Postmodern ERP

--- What aspects of postmodern ERP are highly rated by customers?

First of all, they like the fact that the number of cloud-based ERP systems is growing, and that this brings major reductions in the costs and time needed for initial investment. In terms of time, it seems like systems that used to take one year to deploy now require about half a year. After that, the fact that it enables end user computing—where users can easily change input items or report elements—is a big plus. This is especially useful for overseas business, where changes in requirements can frequently occur. For example, in the Philippines, tax requirements change pretty often. When reports or ledger sheets stipulated by the tax code are outputted by a system, every time there’s some change to the tax requirements the system needs to be modified, and that means higher costs. So, you might say postmodern ERP systems are highly regarded for their flexibility in handling such changes.

--- What are some reasons why transitions do not go smoothly, despite those advantages?

For the management side, if a high ROI isn’t clearly apparent, then the deployment will come to a halt. On-site operators are concerned about the changes that the new systems will bring about, such as the potential for increased workloads, or for automation to lead their jobs to be phased out. In addition, decision-making at Japanese companies often isn’t done in a top-down manner, and management tends to respect the will of those running things on-site, so it can be rather averse to taking risks because it’s safer not to change things on the ground. As a result, conventional and stale technology continues to be used, and companies can’t escape the status quo of using excel all the time.

--- What should companies do to break through this impasse?

I think that when you’re considering deploying a new tool, the best thing to do is to get human resources with strong IT skills into management and have them help in determining your basic policy, so that your company can move forward with a top-down approach. However, there are also cases where corporate culture makes it necessary for decisions to be made using a council system. In such cases, it’s necessary to involve persons who will be affected by the change so that a consensus can be built effectively. Even if you explain the merits, the message won’t get through using words alone, and an effective thing to do is to use diagrams and system demonstrations and such, so that the relevant persons can imagine what the changes from the existing operational flow will look like.
When you adopt a new solution, it’s possible that problems will arise in the short term. However, there are risks if you continue to use an antiquated system, such as not being able to get support for when it fails, or to recover your data, and there are always business challenges in the long run. Companies in emerging nations are extremely eager to adopt new technologies, so you have to consider as well that this can lead to gaps in productivity or competitive power.

--- Could you leave us with a final word about how to effectively use postmodern ERP?

Conventional ERP involved systems whose major role was to record and process information. But going forward, ERP systems need to have the capability to “handle things”, like manage the flow of items without any human intervention, or create sales forecasts using AI (artificial intelligence). For promoting DX as well, I’d like to recommend choosing an ERP system that has a strong affinity with cutting-edge digital technologies like AI or IoT (Internet of Things).