The “Dejima” Strategy for Promoting Open Innovation in Companies: Creating an Investment Return Framework, Not a Cost Center

As digitalization advances, it has become easier for new and previously unexpected players to enter the market in various industries, creating new competition. In this environment, many companies have a sense of crisis that they cannot survive following their existing trajectories. How can you make use of existing resources, spur innovation, and sustain a company for another 100 years? For nearly 20 years, Nomura Research Institute (NRI) has been an advocate of the “Dejima” strategy, which is one of the solutions. We asked Juri Yanagisawa, who has been involved in open innovation projects for many years and is familiar with human resource utilization strategies.

--- Why adopt the “Dejima” strategy now?

Large companies have built systems for making decisions with the main purpose of eliminating unnecessary business processes and efficiently raising quarterly profits. The result is an organizational structure that makes it difficult to try new things and improve through trial and error. “Dejima” in Nagasaki was a place where rules different from those in the rest of Japan were applied under the isolation policy of the Edo period. There, people from different cultures were allowed to come and go and engage in trade. Since around 2018, it has been argued even at the Japan Federation of Economic Organizations that for today's large companies it would also be effective to create organizations which, like Dejima, can be operated independently of the corporation itself.

--- In order to promote new businesses, companies have in the past set up separate corps such as projects under a president’s direct control. What does this have in common with the Dejima strategy, and how is it different?

Common to both is, first of all, that extraterritorial law allows decision-making that is different from existing businesses. They also share the fact that the president is involved and is not bound by existing rules. Meanwhile, the Dejima strategy is a little different from projects under a president’s direct control as in the past, not only in crossing departments, but also in incorporating external human resources and open innovation when gathering diverse human resources. This means using external resources not only to complement the skills and tools for realizing existing strategy, but also to rethink your vision from a new perspective. An increasing number of companies have created separate companies and set flexible treatment rules so that they can hire highly high-paid human resources that are difficult to obtain through existing personnel systems, such as AI (artificial intelligence) experts.

Projects under a president’s direct control may not be able to continue if the president is replaced at the end of his or her term of office. By feeding many projects into the innovation process through trial and error, and whittling them down while advancing in stages, we can avoid the effects of a top-management change by creating a system of “high-birth, high-mortality management” in the form of Dejima. 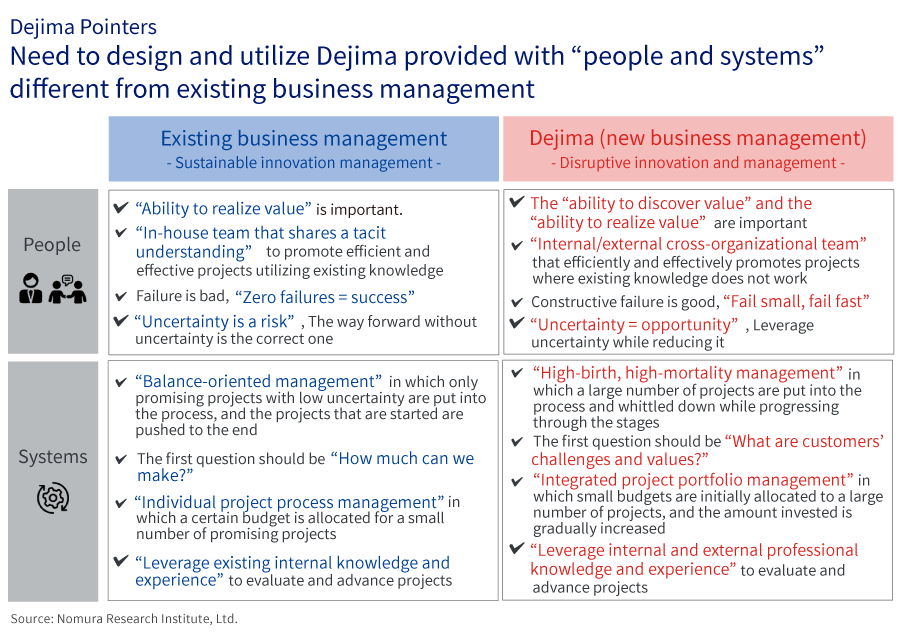 Working the “Dejima” strategy with a medium- to long-term view

--- How do leading companies utilize “Dejima”?

One company, with the twin objectives of “creating customer-oriented businesses” and “making the culture of existing organizations innovative,” established “Dejima” in five locations not only in Japan but in Asia and Europe near its own market. When you send human resources of the main organization to a “Dejima,” the existing culture of self-sufficiency and focus on technology ends up getting dragged along with them, so it started out by facilitating business innovation initiatives while co-creating with customers mainly with externally recruited members.

--- Please give some pointers for making “Dejima” function well.

First, who you send to Dejima is important. It is necessary to gather members who can enjoy the workstyle of finding new value from through repeated failures and improving upon them. It is also important to enlist Dejima managers of that type, or who at least understand the importance the functions of “Dejima”. I feel that when people with experience in launching a new business or experience in management in a different cultural environment are at the top of a Dejima, it often goes smoothly.
The second point is maintaining the process. Rather than short-term profits, it is necessary to focus on trials that lead to value creation for customers and learning from various failures, and to adopt indicators that appropriately evaluate such actions. Many companies will start to consider discontinuing a Dejima itself if it does produce results within two or three years, but it takes longer than that before the Dejima strategy produces results. Once the seeds have sprouted, you must be prepared to spend at least a few years before you can say that results have been achieved from the standpoint of the main organization.

--- Please offer some advice to companies that are considering using “Dejima”.

Even if the image of Dejima that you want to achieve is the same, the road there will differ depending on the organizational culture of each company and the amount of experience in taking on new projects. First of all, it is important to analyze the current situation, consider the necessary steps, and approach “Dejima” with a view to drawing nearer to an ideal form by trial and error.

“Dejima” was originally a system that the Shogunate caused wealthy Nagasaki merchants to invest in to create. The merchants accepted because they knew that they could secure profits through trade in the future. A “Dejima” is not just a cost center; it is a model for medium- to long-term investment and recovery. You cannot be satisfied by simply building a box, you also have to make it function as a place to generate the sustenance for future business. I myself hope to support process design, human resource development, and business creation to that end.