The Current State of AI and its Use in Business

The Second Knowledge Graph Reasoning Challenge was held in December 2019, sponsored by the Special Interest Group on Semantic Web and Ontology of The Japanese Society for Artificial Intelligence. In this contest, the challenge was for AI systems to examine five Sherlock Holmes stories and deduce the culprits, as well as to demonstrate the evidence for the determinations. Nine teams took part in the challenge, with NRI taking first prize for the second year in a row. We sat down with NRI members Mitsuhiro Tsunoda and Yasunori Hokazono and NRI Digital member Kotaro Tamura, who participated in this contest and who have been engaged in AI-related solutions development, and asked them about the current state of AI and the main ways in which it is being used in business.

Smart speaker AI is “in development”

As a technology that can do things like play music, operate home electric appliances, and read the news aloud based on voice instructions, smart speakers are products that make AI feel more familiar to us, and 2019 saw them become a hot topic with numerous companies releasing their own versions. Mitsuhiro Tsunoda, however, told us that “smart speakers are still in the development stage,” for reasons he went on to explain as follows.

“Current smart speakers require a person to say something for an AI to interpret, so people have learned to speak in a way that’s tailored to the AI. If the AI can’t understand a command, it just replies ‘I don’t understand’ or something similar, and it’s difficult for the user to teach the AI what they want it to do when they give a certain command. This is where the capabilities of smart speakers currently stand.”

AI-based natural language processing—where AI can understand a person’s words and respond appropriately—is a challenge, and in particular, informal dialogues with chatbots or AI are an area where there is plenty of room for advancement going forward, says Yasunori Hokazono.

“I think people who’ve used chatbots are aware that compared to asking questions to a human being, chatbot dialogs require you to choose the answer yourself and input the appropriate keywords and such, so they aren’t really smart conversation partners. That’s because it’s difficult for AI to understand the meaning of words based on the context and to grasp the speaker’s intention. With the arrival of smart speakers and such technologies, it does feel like the language processing field has made some advances, but my sense is that this tech hasn’t yet gotten to the point where it’s truly useful.”

Kotaro Tamura also points out that the current lack of standards for evaluating AI is a problem.

“There are a lot of translation services that use AI, for example, but there aren’t any standards for assessing what a good translation is. I think the ways in which we frame our standards for evaluating AI processing, namely ones that value translations in line with human sensibilities, will be important going forward.”

For deploying AI in business, a “long-term perspective” is essential

Meanwhile, the use of AI-based natural language processing in business domains seems to be on the rise. Hokazono gave the following description as a specific example of this.

“In the context of AI-based language processing, the area that’s reached practical implementation the fastest is translation. It’s probably because a lot of translation data such as original texts in English and Japanese has already existed, which can be used in AI learning. What’s more, progress is being made all the time with applications like document classification for grouping numerous documents, and summarizing long texts, or automatically generating commentaries from financial statements and such.”

One such AI solution is NRI’s “Shingan”. “Shingan” identifies extracts specific data from a document. For instance, Shingan can automatically pull out certain information such as document names, contract parties, contract sums, and start and end dates from contracts.

With things like contracts relating to financial products, in some cases the document can be over 100 pages long. Reading and checking the content in order from the beginning would take a considerable amount of time. However, using “Shingan” makes it possible to automatically extract the conditions for deciding whether to accept or annul a contract, and also enables you to drastically increase the efficiency of contract-related operations.

In terms of the characteristic features of this solution, Tsunoda gives an example of how it can perform relearning.

“The way ‘Shingan’ is set up is that you give the system information about where in the document certain data is written, and then it does self-learning, and even if it makes an error you can teach it the correct answer so that it re-learns. In other words, the more you teach it, the smarter it becomes, and that’s a big advantage of ‘Shingan’.” 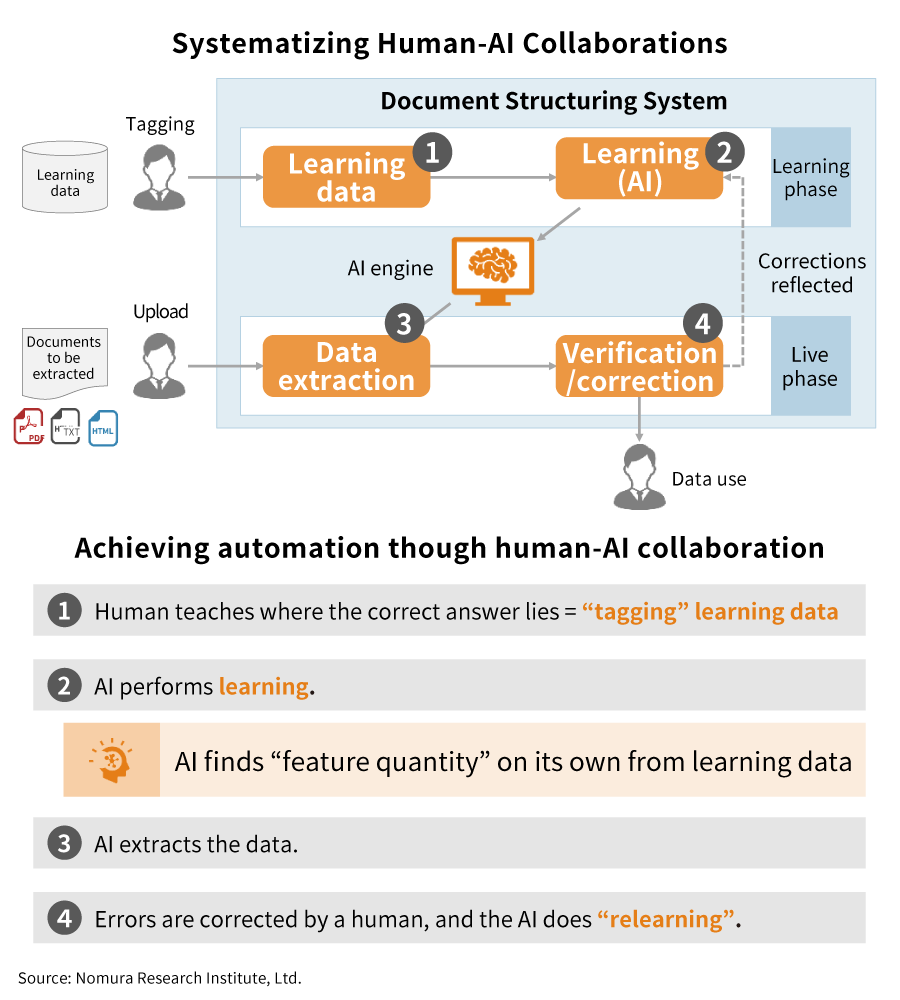 These days, AI solutions are continuously coming onto the scene, but Tamura points out that companies would do well to think from a long-term perspective when rolling them out.

“Even solutions that are purportedly loaded with a general-use AI still need to be customized to suit the particular company or its operations, and from a long-term perspective as well you have to consider how to go about relearning. In that sense, it’s about more than just deciding simply whether something can or can’t be done in a PoC (proof-of-concept). You also have to look at whether the necessary features are in place for longer-term use.”

Finally, Hokazono had the following to say about NRI’s strengths in utilizing AI in business.

“There are cases, for example, where once your operations have been organized, retooling your data will enable you to automate those operations with a simpler system than AI. NRI’s strength is that we don’t have an AI-based philosophy, but rather we get an upstream bird’s-eye view of our customers’ operations and systems, and are able to make optimal suggestions based on the results.”

While AI has become a major trend, we are not at the point where it can be applied to literally anything. For this reason, it’s important to consider things from the viewpoint of what problems you’re trying to solve with AI, and whether those problems can’t be solved without AI.