HOME NRI JOURNAL Why Do Companies Support Sports? -- The State of Support Seen from Questionnaire Survey

Why Do Companies Support Sports? -- The State of Support Seen from Questionnaire Survey

At NRI, we have long followed trends of corporate support for sports, and for many years the lack of company-related qualitative data regarding this topic has been a problem. Then, in autumn 2019, we carried out our first “Questionnaire Survey for Ascertaining the State of Sports Support at Companies”. We asked NRI’s Fusao Misaki and Ryo Nishizaki about the results of the survey and insights gained therefrom.

Quantitatively grasping the state of support for sports

--- Tell us about the reasons for carrying out the survey.

Nishizaki: When it comes to how companies support sports, in the past it was common for companies to have their own teams, but recently methods of support have diversified to include sponsorship, naming rights, posting advertisements, and the like. However, when we tried to research the details of the state of these activities, we always hit a wall, as we were unable to acquire quantitative data on the specific number of companies, amounts of money, and the like. To address that, we sent a questionnaire to companies listed in the First and Second Sections of the Tokyo Stock Exchange in order to ascertain the number of companies that support sports, the methods, objectives, costs, and targets of the support, and the like. Of the companies to which we sent questionnaires, we received responses from 201 companies.

Misaki: Regarding the costs, we asked the companies if they are spending at least a total of one million yen (approximately 10,000 US dollars) on each of 17 efforts including support for international sporting events, support for teams, and support for players. There are many examples of companies giving small amounts of sponsorship money for local sports events at the level of branch stores and offices, but we set that figure as a benchmark of whether a certain amount or more was being spent on support at the company level.

Around 50% of companies that responded are supporting sports

--- What realities came to light from the results?

Nishizaki: Around 50% of companies on the overall average responded that they are engaged in some sort of support for sports, and we learned that the ratio of companies providing support rises as the scale of company sales increases. Regarding the particulars of the support, we saw many sponsors and suppliers to events, leagues, and federations, with only 23% of companies engaged in support for sports owning a team other than a Japanese professional team. We also saw a trend that the larger the scale of a company’s sales, the more likely it is to be supporting not specific regions or teams, but events and entire leagues at the national level. Many companies responded that their objectives in offering support are to advertise their company, make societal contributions, and fulfill their CSR (Corporate Social Responsibility); the results showed that enlivening competition and improving competitiveness were not viewed as particularly important. 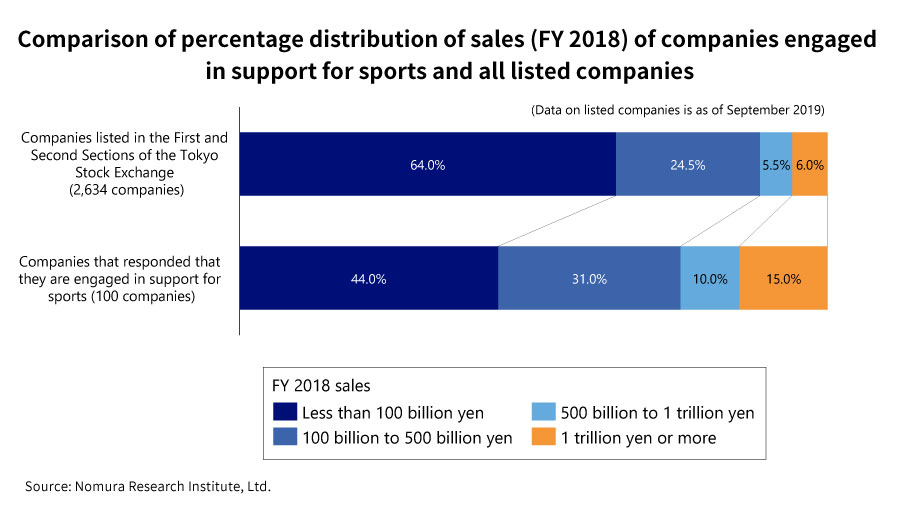 --- Were there any points that differed from your prior expectations?

Nishizaki: The results were almost exactly as we expected, and my frank reaction is that we were able to confirm, with data, what we had previously sensed intuitively. We cannot speak about the magnitude of the numbers based on this survey alone. Assuming, however, the main objective of support for sports is contributing to society and CSR, as the responses show, if interest in sports wanes after the Olympics/Paralympics and clear cost-effectiveness is sought, there is a risk that support for sports will decline. That is because there are many targets for societal contribution other than sports, such as arts and culture. I believe that in order to maintain and increase support for sports, it is important for both the supporters and those being supported to elucidate the objectives for and value of provision of the support and to build a mutual win-win relationship.

--- What kind of win-win relationships can be built?

Nishizaki: For example, professional sports leagues have contact with fans via teams and players all around the country, and assorted data can be acquired from there; however, most leagues don’t have the know-how to make full use of that data. Meanwhile, the companies sponsoring the leagues have the know-how to engage in marketing and the like by using such data, but some companies don’t have customer contacts and data other than those related to their corporate services, and from the perspective of a company in that situation, the customer base and data possessed by the league are quite attractive. If the two cooperate and combine both of their know-how and data, this can be useful in expanding both of their respective businesses. If both sides have a clear idea of these objectives, continued support can be expected even if people’s interest in sports wanes following the Olympics.

Misaki: A past NRI sports-related survey showed the result that “sports contribute to the Japanese people’s happiness.” In fact, all of Japan swelled with excitement during the Rugby World Cup in 2019, and it can be said that the people truly felt happiness because of sports. This is how support for sports can contribute to society, but in that endeavor, I believe that more meaningful support activities can be achieved not just by spending money and helping with advertisement, but also by providing the know-how and technology possessed by companies in order to increase competitiveness and thinking of methods for solving the challenges faced by federations.

Nishizaki: In the sense of enlivening sports as a whole, I would like to see not just large companies but also venture companies and small and medium-sized companies actively participating in support for sports. Since forms of support have diversified, the hurdle to supporting sports is not as high as it was when the most common form of support was to own a sports team. At NRI, we want to continue making fixed-point observations on support for sports by companies going forward and provide data-based recommendations and support.