HOME NRI JOURNAL What Challenges do Companies Face in the Digitalization Execution Phase?

What Challenges do Companies Face in the Digitalization Execution Phase?

We often hear of digital transformation (DX), but to what extent are companies really moving forward with digitalization? Since 2016, NRI has worked in partnership with the Japan Users Association of Information Systems (JUAS) to survey the state of DX efforts by companies. We asked NRI’s Ikumi Shiota and Yuya Miyata about the results of the FY 2019 survey.

--- Please give us an overview of the joint surveys.

Shiota: The purpose of the surveys is to objectively analyze the state of companies putting effort into digitalization while also ascertaining the features of companies that are more advanced in their efforts to allow others to use them as a reference in moving forward with digital business. The main survey items are centered on the sense of threat or opportunity towards digitalization confirmed over the years, challenges and schemes to resolve them, digital IT investment, and the state of legacy systems. In the most recent survey, we added an item relating to the organizational elements and climate necessary for digitalization, with the hypothesis that concerns grow larger as digitalization progresses. A feature of the surveys is that since they’re performed in the form of a questionnaire to JUAS members, we’re able to gain an understanding of the thinking and trends of major Japanese companies.

--- This was the fourth of these surveys; tell us about trends you have seen from the survey results. 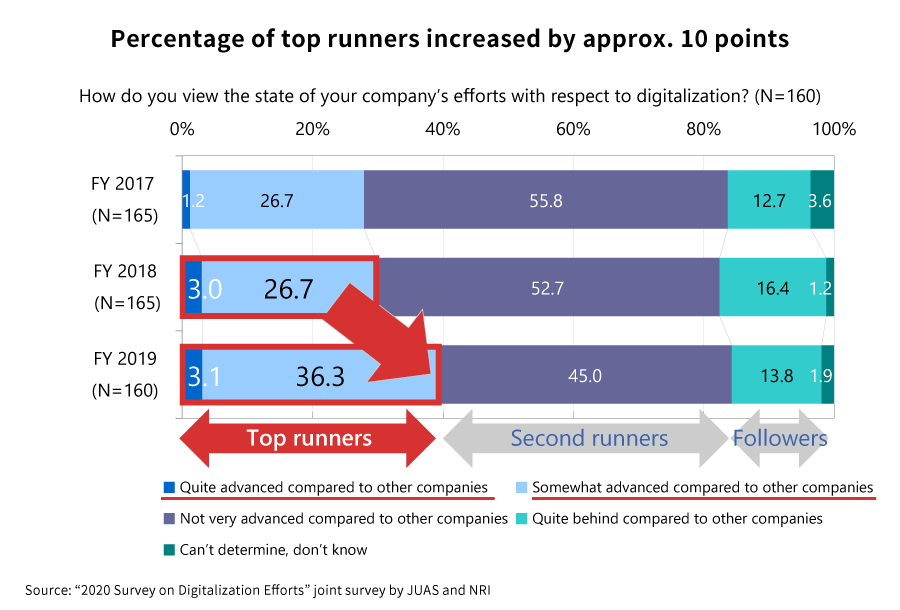 Shiota: Meanwhile, we can see that a majority of companies have not gone so far as to carry out business model reforms using digital technology and IT, and have merely reformed their existing operational processes. As the reason for that, we see the reality that companies face concerns in terms of organizational limits and company climate, like that it’s not possible to go above and beyond existing organizational boundaries, try new things, or engage in speedy decision-making. Many companies appear to be trying various things like company-wide digital workshops and idea-thons involving other companies. However, for large companies in particular, there are cases where the numerous organizational levels mean delayed decision-making and discrepancies in action, and perception of division of roles among organizational entities can diverge. We feel that these companies must take on the next challenge of simplifying decision-making processes and reforming organizational structures, and resolve these issues from a broader perspective.

--- Are there any aspects of top runners’ efforts that serve as a useful reference? Shiota: In the most recent survey, we asked about the state of efforts considered necessary from the perspective of organization, system, climate, and perception. When we carried out analysis of items for which companies responded they were “making some effort, but not enough”, we found that items where there was a difference of 30-40 percentage points between top runners and other companies were “digital education and enlightenment to all employees” and “speedy decision-making and agile implementation”. Though even top runners’ efforts are not necessarily sufficient, we can see their attitude of “let’s start by making an effort” even as they’re aware that it’s insufficient in the midst of uncertainty.

Miyata: In digitalization efforts, it is important to cultivate an environment where failure is permitted and it is possible to take on challenges regardless of outcome. If employees fear failure and find it difficult to carry out PoC, digitalization efforts will lag. In this respect, top runners make use of budgets that don’t require short-term results, considering it strategic investment.

Further, we also often hear that attempted PoCs don’t develop into new business and fizzle out instead, resulting in what we call “PoC fatigue”. What is important is what can be learned from the process and the result even if the result did not pan out according to expectation. If bosses don’t leave PoCs entirely up to those directly involved and instead follow up on them, share the lessons learned from them, and link them to subsequent efforts, it will surely be possible to avoid PoC fatigue.

--- How can companies make use of these survey results?

Miyata: I perform surveys of overseas companies in relation to my work, and I sense that Japanese companies are still behind in terms of digitalization and agile response. Going forward, in order for Japanese companies to shine in the midst of global competition, I hope to see them gain insights from these survey results and use them to help advance digitalization. On our part, we hope to dig even deeper into this information and support our customers in resolving their DX challenges.

Shiota: I believe digitalization involves not just making use of technology, but also overhauling one’s value system. We live in an era in which companies won’t be chosen by society if they only pursue their own profit, and therefore companies must consider what kind of value they can provide from a long-term perspective and bring in stakeholders from surrounding industries to come up with solutions to social challenges. That is why I would like to see companies focus on the conditions and trends of their customers and other companies in surrounding industries. I hope that on the basis of these survey results, companies will visualize where they’re lacking and where they can put in effort, and take a first step forward.