On April 29, while the State of Emergency Declaration following the spread of Covid-19 was in effect, Idemitsu Kosan held an “Online Officer Retreat” for 25 of its executives. Shinichi Matsuda of Nomura Research Institute (NRI), who supported this unprecedented endeavor, is an expert who for many years has been involved in “executive development” (organizational development and team building for executives). We asked him about what kind of suggestions Idemitsu Kosan’s endeavor provides for corporate management while living with Covid-19 and after Covid-19.

Embarking on an unprecedented day of “10-hour online immersion”

--- First, please tell us the background leading up to Idemitsu Kosan holding its “Online Officer Retreat.”

For the past year, Idemitsu Kosan, which merged with Showa Shell Sekiyu in April of last year, intentionally created diverse communication opportunities among all organizational levels. In particular, off-site day-long retreats were regularly held for the executive officers, and NRI supported the administration of those camps. With the spread of Covid-19, however, the retreat that had been planned for February was postponed, and ultimately the company took the plunge to hold it online in April.


Idemitsu Kosan’s Vice President Nibuya described his feelings at the time as follows. “I didn’t know whether we would be able to achieve, in an online setting, communication like that which we previously had when we were face to face. However, I believed we could not allow the relationships of trust and momentum towards reform cultivated among our executives through the officer retreats to be interrupted, and decided to hold the camp online.”

--- Specifically, how did you proceed with the “Online Officer Retreat”?

I will refrain from discussing the topics and particulars of the retreat, but the process of progression thereof was identical to that when face to face, and involved three simple steps for agreement formation.
(1) Pair work: mutual understanding through one-to-one discussion (each member meeting with one another in turn)
(2) Group work: division into groups by topic to discuss topics that arose on the spot
(3) Discussion as a whole: agreement formation through Q&A with respect to group presentations

As described below, for online operations, two communication terminals/applications were used in combination. 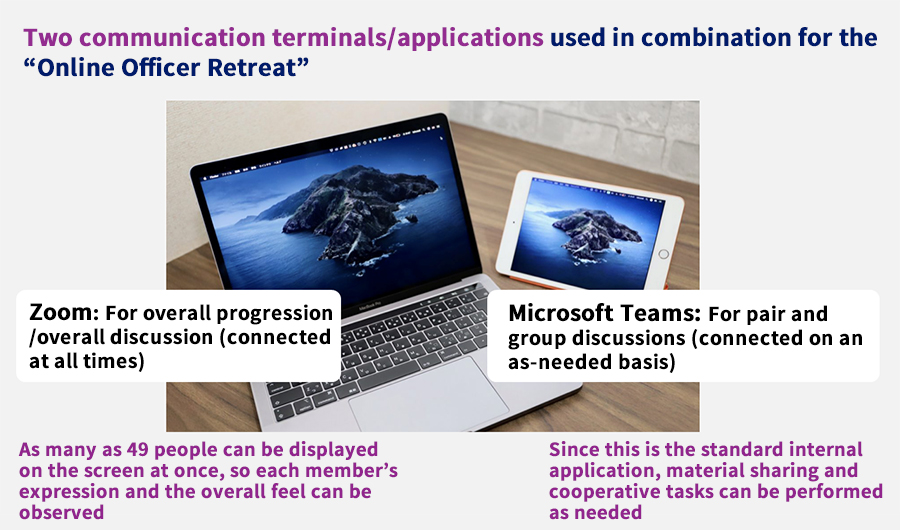 In fact, prior to the retreat, most of the officers had no experience using Zoom, and had no experience of connecting to Teams video calls on their own (they had only used Teams by being connected by their assistants or subordinates). Therefore, the secretariat performed separate connection tests in advance prior to the day of the camp.

--- Being that it was an unprecedented endeavor, what was the day like?

The retreat was set to start at 9:00 a.m., and from 8:00 a.m. onward, participants gradually started to appear on the Zoom screen, exchanging greetings such as “good morning” and “long time no see.” The scene was just like when everyone gathered at the off-site retreat venue. As more participants appeared on the screen, cheerful small talk started, such as “You’re muted and we can’t hear you,” and “I like your background screen.”—it was a good ice breaker.

At the set start time, President Kito appeared on the screen and started the discussion. The officers helped teach each other how to operate Zoom and Teams, and they developed a command of the “raise hand”, “share materials”, and other functions. The discussion proceeded in an even more organized and productive manner than when in person.

At the end, there was an “online drinking party”, and everyone made a toast and reflected on the event. There, President Kito shared his take-away that “I experienced that ‘heart to heart’ communication is even possible online.” The camp ended at 7:00 p.m. Since lunch was also an “online lunch”, the day was truly a “10-hour online immersion”, and it was impressive to see the 25 members on the Zoom screen brimming with smiles of accomplishment along with their “agreeable fatigue”. 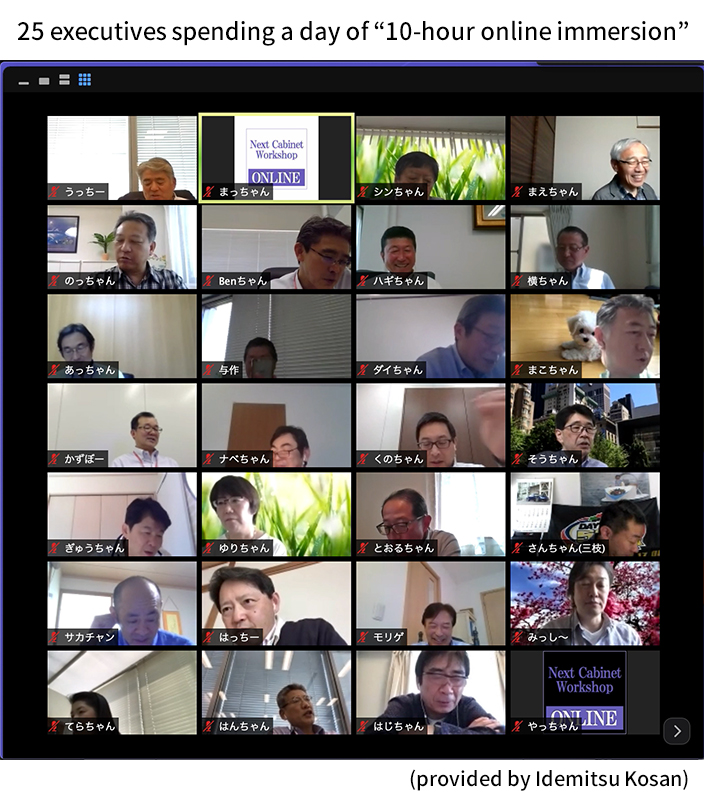 Now is a golden opportunity to move officer retreats “online”

--- What suggestions does Idemitsu Kosan’s “Online Officer Retreat” endeavor give us?

I think there are two major suggestions. One is that now, living “with Covid-19” and an unclear future, executives can give employees a sense of peace of mind and unity by showing themselves communicating online. Starting after the retreat, at Idemitsu Kosan, online meetings among officers were set up from time to time (without the involvement of assistants or the like), and came to be held frequently. Further, the 25 participants have started transmitting information on the matters discussed at the camp by “multi-voice” through the company’s internal magazine and intranet.

The other is that in preparation for life “after Covid-19”, executives should take initiative in terms of online communication. Stimulation of vertical, horizontal, and diagonal communication in an organization is a key to advancing change such as innovation and workstyle reforms, but until recently, geographical and time restraints posed an obstacle. At Idemitsu Kosan, cross-departmental (horizontal) online discussions among officers are already being held regarding each topic that was raised at the retreat, and going forward, a plan is underway to expand and develop these into (diagonal) discussions involving the department manager class.

Idemitsu Kosan is not necessarily a particularly advanced company in terms of digitalization. It is an ordinary Japanese company that has always emphasized face-to-face communication. In other words, it is simply up to the decision of the executives whether a company can embark on this kind of unprecedented challenge.
I believe this is a golden opportunity for all company executives to shift their officer retreats camps “online”.