When we look at the top-selling companies in the Chinese retail industry compiled by the China General Chamber of Commerce, the top three companies in 2019 were all e-commerce companies. In addition, the EC market has expanded its share to 20.7% of the overall consumer market*1.
Alongside the growth of the EC market, digital utilization in the retail and service sectors is increasingly occurring. The times are changing drastically, as EC companies are using their experience to embark on physical store operations, and are facing the need to cater to consumers who value not only price but also the quality of supply chains and product planning.

The China General Chamber of Commerce released the “China Commerce Top 10 Hot Issues 2020” on January 15, 2020. Although the impact of Covid-19 was not reflected here, it is garnering attention as an indicator of new trends in China’s distribution and retail markets.

According to this report, we can see that the Chinese consumer market is creating a commercial blue ocean dubbed the “night economy” in conjunction with the extension of business hours of commercial facilities and the opening of food and drink districts open late at night, the government and the private sector are working to allocate roles in creating a strong domestic market, and new sales methods and moves to meet diverse consumer needs are emerging. 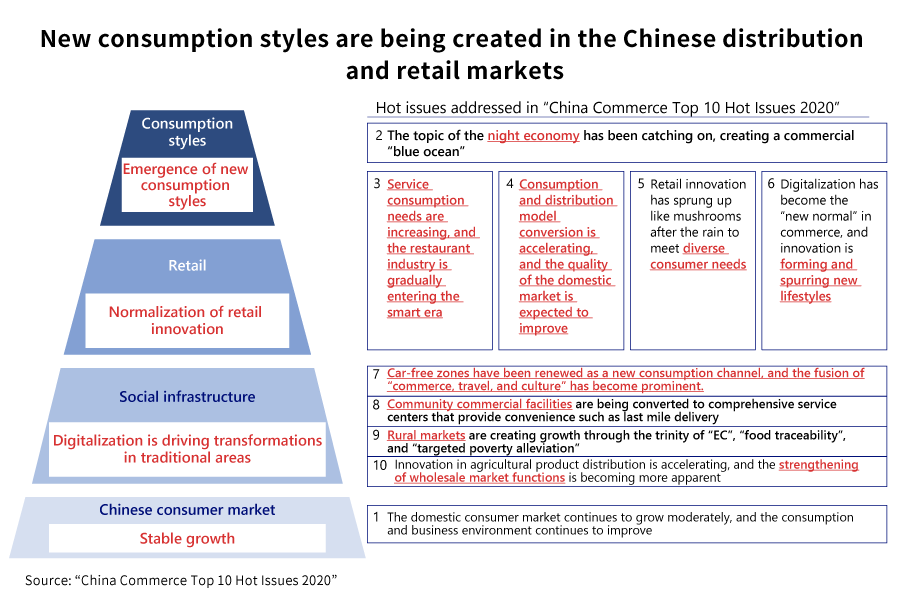 Retail innovation has become the norm in China in conjunction with the development of the digital society, expanding its realm from improving existing operations to the level of business model innovation. In the field of product development, C2B (Consumer to Business) models are evolving, live distribution is being developed as a sales method, and mobile pre-ordering is being developed in physical stores.

An example of innovation in C2B models is the development of “Zero Cream” by Alibaba Group’s TMIC (Tmall Innovation Center) and L’Oreal Paris China. This development involved 1,000 consumers who purchased cream from Tmall or Taobao over the past year, and everything from concept development to final product selection was done online. For this reason, the development period was only 59 days. While significantly shortening the normal development period of cosmetics by one to two years, the project was a great success with sales of 100,000 bottles on the first day of sales.

In addition, with “live distribution”, which can be said to be the online version of TV shopping, broadcasters are making use of new sales methods where they showcase their individuality to attract fans, and immediately answer questions from viewers during broadcasts. “Mobile pre-order” and over-the-counter pick-up systems are also becoming widespread, which can shorten in-store wait times and eliminate staffing shortfalls during peak hours.

In addition, new movements are accelerating, such as the “IP economy”, which makes profits by holding theme shops and events for things like popular manga and anime; “singles consumption” targeting more than 220 million singles; and the “first store” economy, which aims to attract famous domestic and overseas brands and revitalize the economy with the opening of these brands’ first stores, showing the appearance of the “sprouting of new consumption styles.” 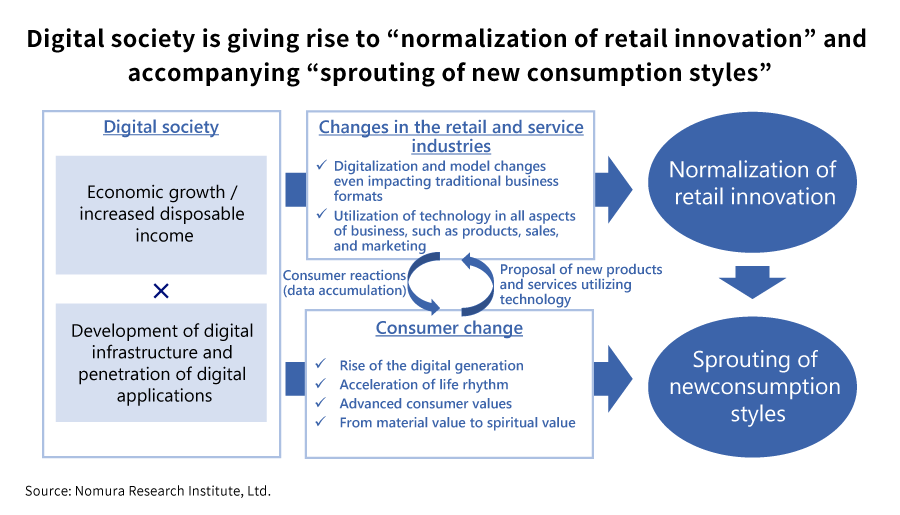 Resembling developed countries in terms of consumption habits and values, the pursuit of spiritual affluence is also born

Economic growth has increased people’s disposable income, and in large cities such as Beijing and Shanghai, their purchasing power is approaching that of developed countries. Overseas lifestyles and values regarding products have permeated among Chinese consumers through social networking sites and the like, and the pursuit of spiritual value rather than just material goods has begun.

Against this background, three changes are occurring. One is the change in the rhythm of life in large cities. Living alone and without time to spare, consumers want the convenience of doing everything on their smartphones, not only for shopping but also for receiving various services.

The second is the desire for a quality life. The values of consumption have changed dramatically, and more and more people want to spend money on themselves, have fun and lead a satisfying life. The overseas travel boom is also a manifestation of this. It is said that overseas travel will grow explosively once Covid-19 calms down.

The third is the pursuit of spiritual desires. There is a trend of beginning to pursue spiritual desires once demand for material goods is basically met. Pet-related consumption in China has increased recently, and there is a growing acceptance of paying for music and video distribution services.

Many people in their 20s and 30s who live in the city are single and have a relatively high degree of education. Their monthly income is around 10,000 yuan, or around 160,000 yen. They rarely support their parents. It used to be thought that once you become a member of society, you have an obligation to support your parents, but now that parents have pensions and can live without the support of their children, singles can use their income for themselves.

Because of this, businesses geared toward “singles consumption” are becoming popular. One example is condominium management for singles. Most Chinese homes are for families, with floor areas of 50 square meters or more, but more and more companies are embarking on the management of single-person apartments. These apartments are operated fully online. Not only contracts but also building management, cleaning, and repair requests can all be done with a smartphone without spending extra time.

Additionally, men, who have traditionally been family-oriented and had low motivation to spend on themselves, are expanding their consumption for themselves as their economic power improves. For example, in cosmetics for men, sales of makeup cosmetics are increasing in addition to lotions and emulsions.

A growing number of men’s social EC users specialize in categories that men are interested in and handle a wide range of items from fashion shoes to clothing and watches.

Digital socialization is accelerating due to the influence of Covid-19, and the transition to new consumption styles is progressing

The Chinese government has announced a larger investment plan for 5G. Meanwhile, consumers are showing a tendency to increase their nesting consumption due to the impact of Covid-19. The combination of these two conditions is resulting in expectations that online counseling, live distribution, medical care, and education will cause the consumption of intangible goods to shift online more rapidly.

In China, further growth is expected due to the synergistic effects of the normalization of retail innovation, the emergence of new consumption styles, and government investment therein. China will continue to develop as a more advanced digital society, and will gradually morph into a mature market.

I think the sprouting of new consumption styles, such as nighttime consumption, singles consumption, men’s consumption, and the IP economy*2 offers plenty of room for new opportunities for Japanese companies that have been engaged in precise marketing aimed at small masses in mature markets to enter the Chinese market.