HOME NRI JOURNAL Impact of Covid-19 on Dining Out, Entertainment, and Travel-Related Consumption and Prospects for a Recovery in Demand

Impact of Covid-19 on Dining Out, Entertainment, and Travel-Related Consumption and Prospects for a Recovery in Demand

Due to the spread of Covid-19, the stay-at-home requests and state of emergency declarations from national and local governments, opportunities to go out for dining, entertainment, and travel have decreased significantly. In order to grasp the actual situation and impact in Japan, Nomura Research Institute (NRI) has conducted a “Questionnaire on Lifestyle and Consumer Behavior in Conjunction with the Spread of Covid-19” as a large-scale follow-up survey on three occasions since the declaration of the state of emergency. In addition to clarifying the actual changes in consumer awareness and behavior, we also looked at the prospects for demand to recover going forward and at the direction of countermeasures.

Significant drop in food service, entertainment, and travel-related consumption, and gaps in recovery from industry to industry

The spread of Covid-19 has caused a sharp decline in consumption relating to dining out, entertainment, and travel, and has had a large impact on related industries, according to the Ministry of Internal Affairs and Communications’ “Household Survey Report” conducted in May. NRI conducted an internet survey of roughly 10,000 Japanese consumers nationwide on three occasions in late April, late May, and late June 2020. Then, we analyzed 8,024 people who answered all three surveys to clarify how Covid-19 affected food service, entertainment, and travel-related businesses, and we considered recovery measures.

Regarding whether to resume dining out, entertainment, and travel activities going forward until infections of Covid-19 end in Japan, even with the undetermined timing of resumption, we learned that demand is expected to recover to 91.3% for dining out, 81.5% for entertainment, and 76.0% for travel. Furthermore, once a declaration of an end to the crisis in Japan has been issued, each will return to at least 95%, but not 100%. 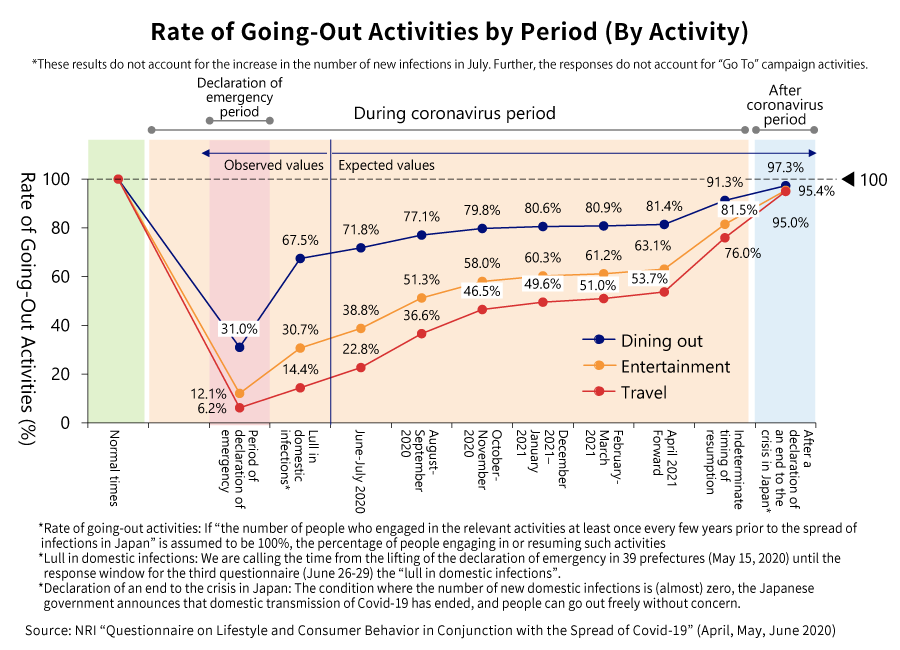 For dining out, the result was that the use of “food vendors / restaurants” recovered the fastest, followed by “coffee shops / cafes” and “fast food”, with “pub” trailing behind them. In addition, according to an analysis based on the frequency of daily use, the demand of “heavy consumers” who dined out at least once a week remained at 50% even during the state of emergency, and since the state of emergency was lifted on May 15 in 39 prefectures, it was found to have recovered to a little less than 90%.

For travel, recovery began with “day trips”, followed by “accommodations / nearby” and “accommodations / far”. What was interesting was the suggestion of a correlation between having the financial means (household annual income) and the intention to resume travel.

It became clear that underlying all these activities, there were struggles and conflicted feelings over the infection risk

When people were asked why they resumed dining out, entertainment, and travel, the most common answer was the “lifting of the state of emergency” (51.1%), followed by “lifting of request for self-restraint of traveling and business suspension” (31.5%). It also became apparent that a smaller group of people resumed for reasons based on their own subjective judgment and thinking. In addition, among those in their 30s and up, the percentage of people who cited “thorough infection prevention measures at stores and facilities” as the reason for resumption increased with age, and it seems that they are concerned about the specific circumstances for reducing the risk of infection when they are out.

Meanwhile, some people continued to stay at home, giving the reasons of “risk of infection (to themselves)” (48.6%), “the lack of a vaccine (risk after infection)” (29.8%), and “the risk of infecting others” (28.1%). We also found that at least 95% of people who engaged in dining out, entertainment, or travel may refrain from doing so again if there is a reason. Specifically, 64.7% answered “reissue order of state of emergency”, 51.6% answered “stay-at-home request by the governor”, and 49.0% answered “increase in new infections”. Thus, throughout the study, it became clear that underlying all these activities there were struggles and conflicted feelings regarding the risk of infection.

In order to spur and promote consumption going forward, it is probably necessary for businesses to promote thorough infection prevention measures and hygiene management. To this end, in addition to the efforts of business operators alone, it is also important to thoroughly implement preventive measures through the efforts of the government and administrative agencies.

Consumers also need to be thoroughly informed of the “new lifestyle”. In particular, the questionnaire showed that, for the “new lifestyle”, 6.3% did not implement any of the “basic measures”, such as avoiding the “Three C’s” and handwashing (nine items were covered in this survey), 11.8% of people did only one, and that people with low prevention awareness are going out, so it is important to further disseminate the “new lifestyle”. 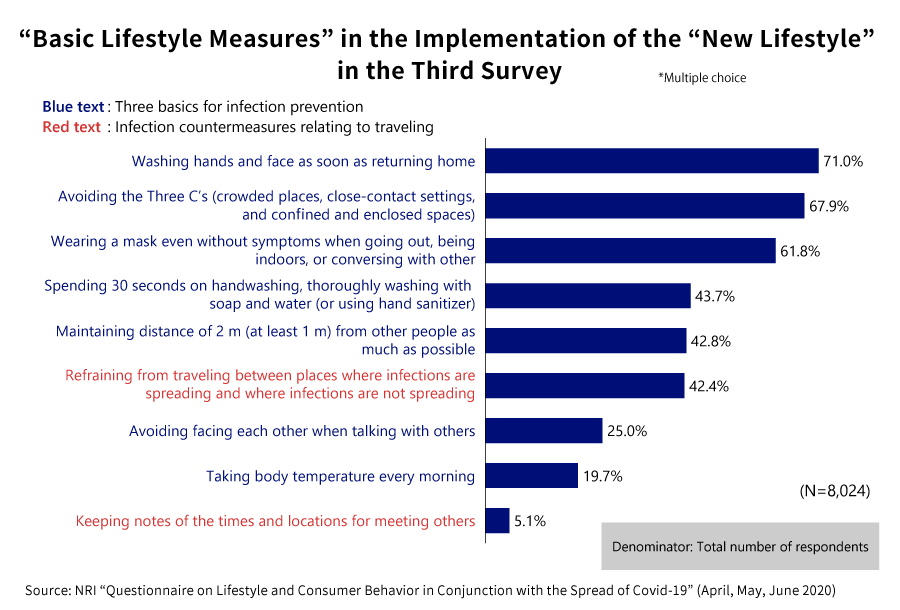 Since the infection situation changes daily, such as with the number of people infected with Covid-19 rapidly increasing in July after this follow-up survey was conducted, policy decisions need to present a flexible response with respect to the design of various systems relating to Covid-19. Some respondents said that the reasons they want to use the “Go To” Campaign are for economic recovery and to help businesses. Recently, the momentum of “support consumption” has also been increasing, and support schemes that utilize crowdfunding are emerging. It is also important to take advantage of this momentum and to foster empathy.