Countries and regions around the world have been required to make various judgments and measures against Covid-19 in a short period of time. What became clear from this was the importance of speed in responding to emergencies. Going forward, with the need for difficult maneuvering to balance infection control measures and economic measures, the digitalization of Japan’s national and local governments is an urgent task, says Tadashi Mizuishi of Nomura Research Institute (NRI). We talked to Mr. Mizuishi, who has been involved in public policy for many years.

Taiwan for example, having experienced the SARS epidemic in 2003, began quarantine measures at the end of 2019, and foreign entry restrictions in late January. In mid-February, they requested that people refrain from going out, and established a PCR testing system in late February. As a result, Taiwan has been very successful in controlling coronavirus infections, as is well known.

Taking advantage of the lessons learned from MERS, South Korea has succeeded in suppressing infections by thoroughly implementing a testing system and contact tracing with isolation measures, from the beginning of February 2020. In addition, it requested that people refrain from going out from the beginning of March. 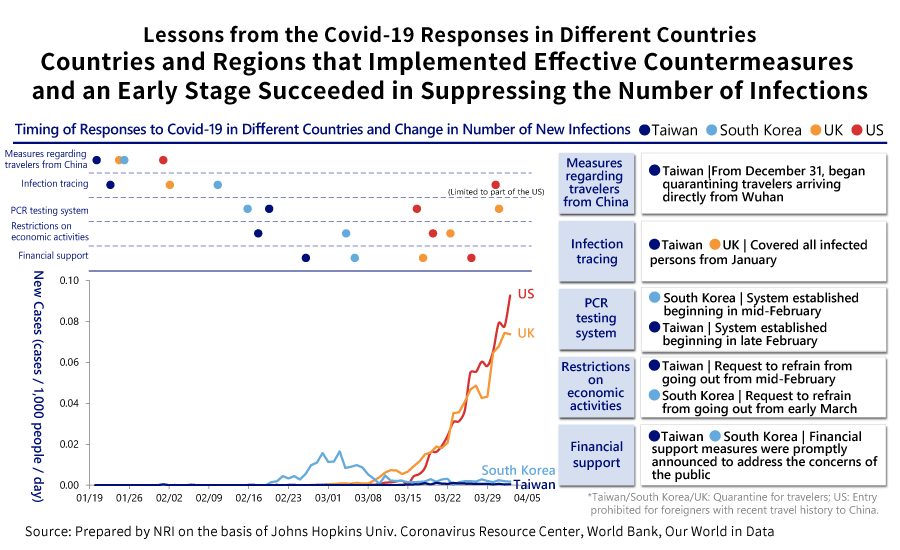 The growth rate of real GDP in countries with widespread infections has been significantly lower year-on-year, but Taiwan and South Korea, which have succeeded in controlling infections, have minimized the impacts on their economies.

In response to Covid-19, Japan’s national and local governments have been required to make difficult maneuvers to balance infection control measures and economic measures in an unprecedented situation. The biggest lesson learned from all this is probably the importance of response speed.

In August 2020, NRI conducted a “Survey on Covid-19-Related Measures” and analyzed it using the social listening*1 method in order to understand the voices of citizens regarding Covid-19-related measures in Japan.

On the basis of the survey, with respect to “distribution of cloth masks”, we learned that negative reactions regarding speed were particularly strong, with a sharp increase in people answering that it was “slow” or “unnecessary” in the month and a half from the government’s announcement to 10% completion of distribution. Furthermore, regarding the “100,000-yen benefit” as well, most dissatisfaction was concerned with the response speed, and it was found that negative feelings regarding speed and procedures increased due to the delay in distribution mainly in large cities.

What this shows us is the importance for national and local governments to accurately interpret what is happening, make the best possible decisions as quickly as possible, and flexibly change their policies according to the situation, regardless of initial hypotheses and judgments.

For the post-corona era, national and local governments will need to promote digitalization in order to speed up policymaking and project execution while maintaining their traditional public roles. There are four policy tacks to follow: (1) “evidence-based” policy making through continuous digital monitoring with high immediacy; (2) promotion of “civic tech” in which citizens take the initiative in policy-making by utilizing digital technology; (3) the search for “new public-private partnerships” for co-creating value by utilizing big data, IoT, AI, and the like; and (4) the establishment of a “policy portfolio” that enables experimental and aggressive approaches in the digital domain.

With respect to (1), the government is already promoting EBPM (evidence-based policymaking) based on the “Final Summary of the Council for Statistics Reform Promotion” and other materials, but by utilizing “alternative data” obtained from things like IoT devices, social network services, and POS data, it is possible to further accelerate EBPM.

With respect to (2) “civic tech”, it is well known that Code for Japan*2 established the “Tokyo Metropolitan Government Covid-19 Countermeasures Site” in a short period of time in collaboration with companies and the national and local governments.

For (3) “new public-private partnerships,” the Ministry of Health, Labour and Welfare collaborated with LINE to collect and provide information for infection cluster countermeasures, and grasped the actual situation of 20 to 25 million people in just two days.

Furthermore, in our uncertain and rapidly changing society going forward, it is necessary to take heed of the signs of change, build (4) a “policy portfolio”, and further expand and develop promising initiatives through continuous experimentation and demonstrations. Given the impossibility of guaranteeing 100% success with R&D and start-up support, it is important to establish a “policy portfolio” that incorporates a certain degree of failure.

What all four policy tacks have in common is the importance of digital technology. Utilization of digital technology will be indispensable for promoting policy projects amid Covid-19. Under these circumstances, it is expected that three digital infrastructures will be developed. The first is the spread of the Individual Number Card—a universal digital ID—which requires support for the issuance of Individual Number Cards through the “My Number Points Project” and convenience improvements by integrating it with driver’s licenses, national qualifications, and the like.

The second is the promotion of digital government (e-government). Based on a grand design with a view to improving the degree of life satisfaction among the public and raising corporate productivity, all administrative procedures can be completely digitized to enable swift project execution.

The third is the promotion of digitalization in rural areas. For example, teleworking has surged ahead in central Tokyo, but the rate of implementation in rural areas is about 20 to 30%. It is expected that the digital capabilities will be improved by improving the degree of companies’ digital utilization.

NRI’s research shows that consumers with a higher degree of digital utilization are more satisfied with their lives, and we believe that the swift implementation of measures by utilizing digital technology will lead to further improvement in public satisfaction.