Many businesses are attempting to carry out digital transformation (DX), operational reforms, structural reforms, and various other types of transformation, but have not yet been completely successful. To find a solution to this situation, six volunteers who have supported a wide variety of businesses as Nomura Research Institute (NRI) consultants gathered their knowledge and published a book entitled The New Normal Company. We interviewed co-authors Mitsuyoshi Sudo and Takahito Kato about “the ability to continuously transform” that they learned from successful businesses.

Instead of a drastic transformation, continue to change on a daily basis

--- Why did you decide to write the book?

Sudo: From around 2018, there has been an increasing trend to move away from irresponsible capitalism, and instead focus on social contribution, as represented by SDG. Further, there is consensus among management that uncertain conditions, such as the Covid-19 pandemic, are likely to occur again. After seeing that large-scale reforms set forth in mid-term plans that were started were not successful, we started to think that under the current environment, businesses that continue to change on a daily business are more likely to become closer to the type of businesses that they wish to be in the future. Thus, we wrote the book as an opportunity for people to think about new forms companies should take.

Kato: In our work, many companies consult us about “wanting to change the company”, but it seems that those are the businesses that tend to make decisions based on past successes. On the other hand, when you look at strong companies like Omron and Recruit, you see that instead of clinging on to the past, they are constantly changing. The “new normal company” does not only think that “transformation is necessary”, but also asks “Are we always changing?” We thought that by writing about that, we would raise questions about the principle of following accepted practices.

--- What do businesses need in order to continue to transform?

“The ability to retrofit at will” and “the ability to undergo periodic renewal” on the horizontal axis concern mechanisms. “Retrofit” is an IT term, and means to replace components and equipment while continuing to use the same main constituent. Once a core system etc. is built, it is difficult to make changes, but in an uncertain environment, a mechanism that allows necessary changes to be made freely is essential. “The ability to undergo periodic renewal” derives from a tradition at Ise Shrine that has continued for more than 1,000 years to periodically restore its buildings. A mechanism that does not rely on people but allows for transformation to be carried out periodically will lead to the ability to continually change. 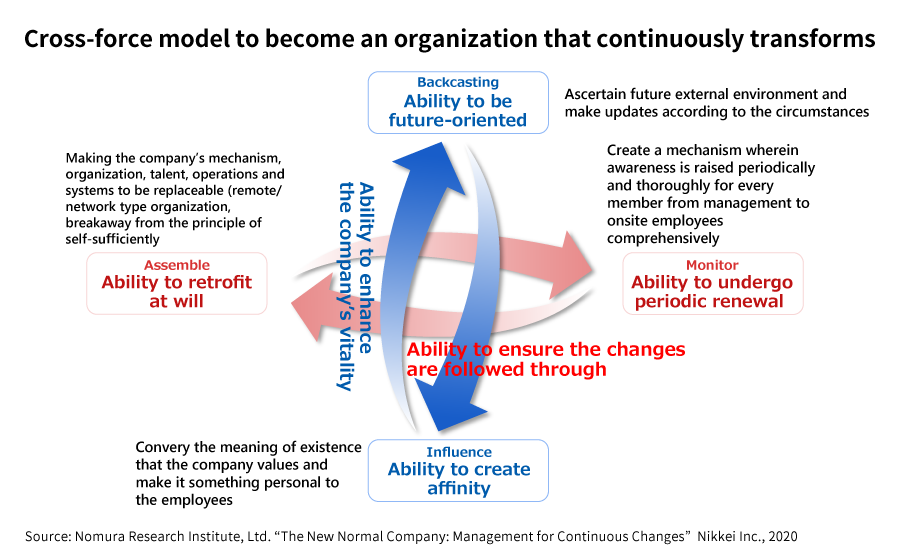 --- Do Japanese businesses tend to lack any of these abilities?

Sudo: It seems that even if businesses have “the ability to be future-oriented”, they are weak in “the ability to create affinity”, which is necessary to ensure that all employees can easily understand and digest the concept. Gathering all employees for a 30-minute presentation by the company president will not suffice as a method of ensuring this. “The ability to retrofit at will” is also lacking. American companies replace personnel when skills that are required change with digitalization, but that is not something Japanese businesses can do. In order to carry out a transformation while utilizing existing personnel, it is necessary to have, from the beginning, a mechanism that will easily allow new recombinations.

Another thing we started to feel when writing the book is that a good president has these four abilities. A president should not only be thinking about self-preservation and playing safe, but must also have a mindset to grow the company and create new things, and educating management to foster awareness of the same is also important.

Transformation should not be difficult if you pursue what you want and be proactive.

--- Going forward, how would you like the book to be utilized? Are there ways for individuals to enjoy transformation?

Kato: The book introduces seven methods to realize the four abilities, and we have been incorporating the details in consulting proposals. We would like Japanese companies to stop avoiding changes in order to be safe, but try to change, and if it fails, try changing again; in order not to lose against foreign businesses, the willingness to continuously change must be in the DNA.

What is important to individuals is not to be passive. What we felt while writing the book was that if people gather together knowing what they want to do, a good team will be built, they will engage in constructive discussions, and do work that is satisfactory. Even in large companies, it is possible to do more than what you are told to do, and to think outside of the box.

Sudo: We would like to send out the concepts and methods that we came up with, convey the fact that we can be partners that will support organizational reform, and provide consulting from a heightened perspective. In particular, we are in an era where individuals’ values are changing, and they are not simply finding employment with companies, but choosing companies based on the type of work they want to do. The behavioral principle of “for the company” and “for others” ends up creating an escape route. If there is something an individual wants to do, and he or she decides to do it, the only thing left is to go for it. If people would engage in their work and deal with the world with such an attitude, that should bear fruit in the future.