HOME NRI JOURNAL Towards an Accurate Understanding of the Reality of Workers Furloughed Because of Covid-19, and Truly Necessary Employment Policies

Towards an Accurate Understanding of the Reality of Workers Furloughed Because of Covid-19, and Truly Necessary Employment Policies

Nomura Research Institute (NRI) conducted a survey in late October 2020 called the “Survey on the State and Intent Going Forward of Workers Furloughed Because of Covid-19”, which surveyed 2,163 workers who are currently furloughed because of labor adjustment at their workplaces related to the spread of Covid-19 infection. We asked Shinichiro Umeya and Kana Takeda of the Center for Strategic Management & Innovation, who were involved in the survey and analysis, about the state of furloughed workers, changes in mindsets, issues elucidated thereby, and employment policies that will be needed. 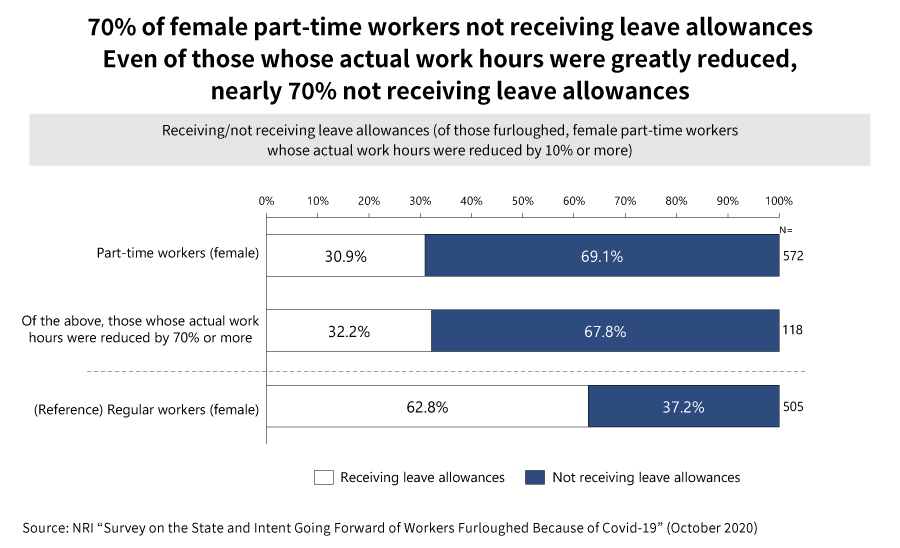 To a question about intent going forward, nearly half responded that they “would rather receive wages for doing actual work than receive leave allowances”, and it was revealed that a greater proportion of those in their 40s and 50s than those in their 20s and 30s desired a return to work over receipt of leave allowances.

From these results, it can be gathered that the income of female part-time workers was critically important for maintaining a living for many households, and that furloughed female part-time workers were the primary earners in a substantial number of households. The results also uncovered the reality that women in these circumstances are not receiving the leave allowances that they should be entitled to receive and are facing strong anxiety and adversity. 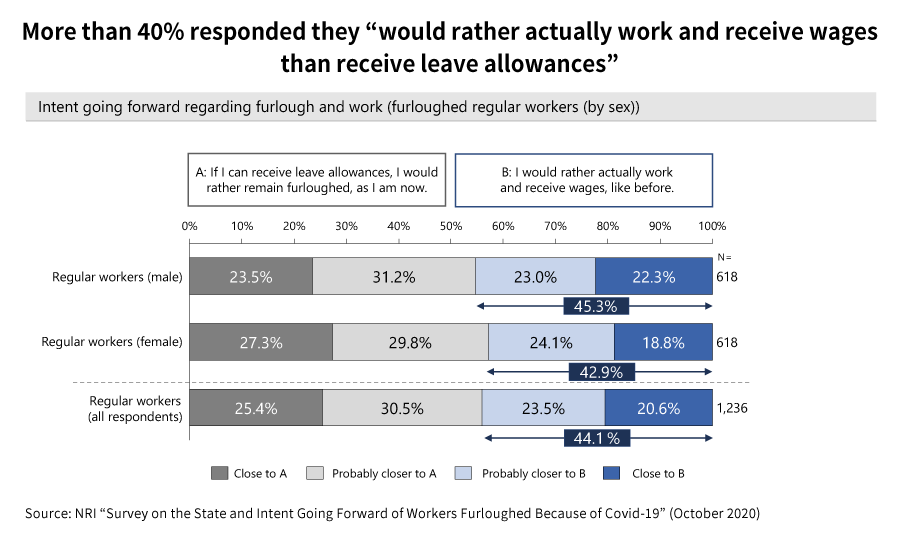 Regarding the reasons they would prefer to return to work than to receive leave allowances, many responded that they felt unsatisfied or uneasy about the leave allowances, and also that it was difficult to maintain a daily routine and their physical and mental health.

Further, 51.0% of furloughed regular workers “wish to find a new job”, and 81.3% of those would desire or accept changing to a job in a different industry. Moreover, 60.8% of those wishing to change jobs responded that they would “be willing to consider working in an industry facing severe labor shortages”.

A Call to Consider and Realize Employment Policies Aligned with Reality

In its employment policies, the government is starting to shift emphasis from maintenance of employment to support for movement to industries facing labor shortages. As is also clear from the changes in the mindsets of workers, the government can be expected to carry out swift and bold support measures for such movement going forward.

To give some examples of specific measures with respect to regular workers, it is necessary to upgrade education and training systems in line with actual demand, such as through OJT utilizing secondment while maintaining the same employment position and expanded education and training subsidies, and to upgrade employment matching support systems for companies. It is also necessary to reform various systems that restrict labor movement and otherwise consider employment policies in earnest.

Meanwhile, looking at the current state of furloughed female part-time workers, we see that as revealed in our survey, there are many female non-regular workers who are not receiving leave allowances despite being able to receive them in theory and who are facing strong anxiety and adversity. Support is not necessarily reaching those who need it. It is an urgent task to swiftly and reliably carry out support measures to help these people maintain their livelihoods.

Specifically, in addition to thoroughly informing and promoting understanding by both workers and employers of support systems, it is necessary to quickly establish expert consulting desks for people facing adversity because of labor adjustment as a result of Covid-19. Further, it is necessary to consider in earnest additional policies focused on those facing adversity, such as the establishment of emergency livelihood maintenance support systems, the building of job matching support systems, and the reform of systems that restrict employment.