In December 2020, Nomura Research Institute (NRI) conducted an internet survey of 55,889 female part-time workers around the country, 5,150 of whom experienced reductions in their work shifts as a result of the spread of Covid-19 infection.
We asked Shinichiro Umeya and Kana Takeda of the Center for Strategic Management & Innovation, who were involved in the survey and analysis, about the state of those who are “substantially out of work” revealed by the survey and the reasons that government assistance is not reaching them.

An Estimated 900,000 Female Part-Time Workers Whose Shifts Have Been Drastically Reduced Because of Covid-19 are “Substantially Out of Work”

We defined female part-time workers whose shifts have been reduced by 50% or more and who are not receiving leave allowances as being “substantially out of work”, and estimate that as of December 2020, the number of such workers was as many as 900,000. Those who are “substantially out of work” can be said to constitute an “invisible poor” not categorized as either “furloughed” or “out of work” in ordinary statistics.

Further, only slightly over 10% of female part-time workers knew of the “support fund and allowance” that those unable to receive leave allowances can apply for themselves, and 60% responded that it was the first time they had heard of such assistance. Even among those aware of the assistance systems, nearly 90% had not applied. 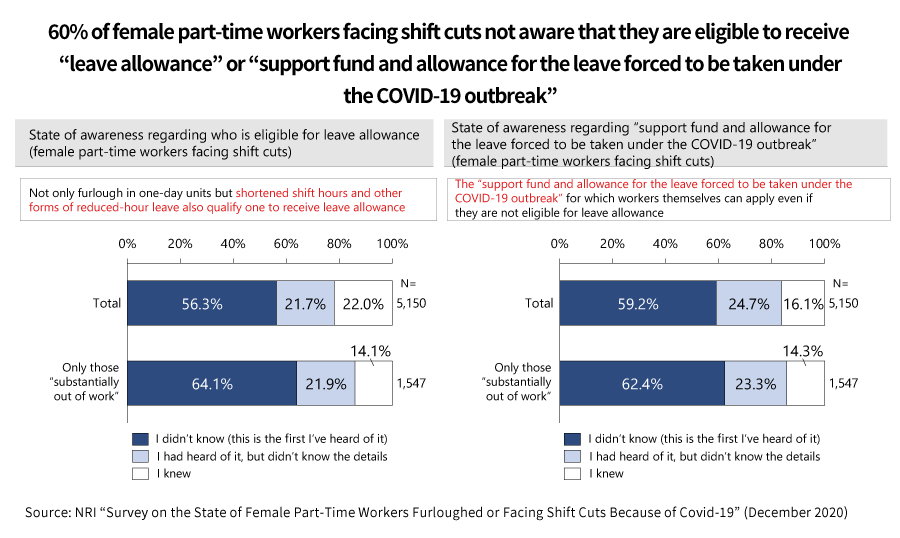 This reveals the reality that those whose shifts were cut and incomes reduced because of Covid-19 have not managed to utilize leave allowances, leave assistance, and other systems to receive economic assistance and maintain their livelihoods.

This is not the first time it has been pointed out that financial circumstances pose a major hurdle to marriage, but the situation is now more dire than ever. The falling birth rate has been announced and reported on, and the possibility that such reduction will continue has surfaced.

What is needed first and foremost in the present situation of the dramatic increase in women who are “substantially out of work” amidst the Covid-19 crisis, many of whom are isolated from assistance, is to form widespread awareness through government spokespeople, the media, etc. that “even irregular workers and those whose shifts were only partially cut can still receive leave allowances and leave assistance”.

Further, it is also necessary to set up consulting desks for those who are facing strained life circumstances as a result, because of Covid-19, of reduced income from the workplaces where they are employed part time. For those who suddenly found themselves in strained circumstances and in need of assistance for the first time during Covid-19, it is difficult to approach the appropriate help desk, and thus we consider that it would be effective to set up specific consulting desks for people in these circumstances, make them known, and use them as a point from which to direct people to existing help desks.

Moreover, given the current state in which many people are substantially out of work, with the subtext of the urgent need to maintain lives and livelihoods, it is necessary to expand and implement loan programs for which these people are also eligible.

Further, many of those who are close to being out of work because of shift cuts and the like wish to resume work, even if in a different occupation, and to earn an income in order to maintain their livelihoods. We consider that it would be effective in both the short term and the long term to provide transfer assistance to these people so that they can assume occupations where human resources are needed and resume working.

In any case, it is extremely critical that national and local government agencies gain an accurate understanding of the present state of people who are substantially out of work, and convey a strong message that society and the government will stand with them and support them.