HOME NRI JOURNAL Trends in Digital Yuan, for Which Trials Are Underway, and the Impact on Japan

Trends in Digital Yuan, for Which Trials Are Underway, and the Impact on Japan

As a venue for discussions between Japan and China regarding monetary economies and policy responses, since 2012, NRI has been convening the Japan-China Financial Roundtable jointly with China Finance 40 Forum, a private Chinese think tank.
At the 11th conference held in November 2020, the “Central Bank Digital Currency”, which is becoming more active in both countries, was discussed. We asked Tetsuya Inoue of the Financial Technology & Market Research Department about the characteristics of, and trends in, digital Yuan, and the impact on Japan.

The China Finance 40 Forum (“CF40”) is a think tank that was established in 2008. It is a private nonprofit think tank, but it is unique in that it has close ties with policymakers.

CF40’s first overseas activity was the Japan-China Financial Roundtable with NRI, and subsequently, it has held conferences with internationally renowned think tanks such as Brookings and Bruegel, and has become an influential think tank. The Central Bank Digital Currency (“CBDC”) has been one of CF40’s main research topics from early on, and it played a central role in introducing China’s CBDC, the so-called digital Yuan, by holding seminars and publishing literature related to CBDC. CF40’s research findings have often been cited in European and American materials, and it is now a global authority.

Since 2012, Japan-China Financial Roundtable has held conferences about once a year and continued discussions. The topics have focused on various policy issues that are important for macroeconomics of both counties, and the topics selected by CF40 have all strongly reflected Chinese policy issues at the relevant points in time. Chinese monetary economic trends inevitably affect Japan, and thus it is important for NRI to understand such trends for its important customers.

The background of the development of the Central Bank digital currency in China: measures against “financial exclusion” and elimination of information monopolization by private enterprises

China’s cash balance has fallen below 10% of the GDP, and the use of cash is otherwise trending downward macroscopically; in urban areas in particular, opportunities to use cash in daily life have been falling. The reasons for such decrease include a loss in “trust” due to frequent counterfeiting occurrences, but in recent years, the trend has been spurred by increase in cashless payments. Because such a phenomenon can cause new “financial exclusion” of people who are digitally vulnerable or residents of rural areas who are unable to engage in electronic commerce, remedying such a situation has arisen as a policy issue.

Further, in China, there are concerns that giant IT enterprises that have been facilitating the increase in cashless payments are monopolistically collecting data concerning users and transactional details, hindering competition and innovation.

In light of the presence of the Chinese economy in the world, from a long-term view, it would be natural to raise the position of the Yuan as an international currency, and digital currency, because of its convenient nature, is likely to facilitate that. However, when looking toward the near future, similarly to high-speed railways and 5G technology business models, what is more important is the potential to show the international competitiveness of core technology for introducing digital currency in various foreign countries through its reliability and cost competitiveness based on the performance of China’s CBDC in a mega market, which will lead to enhancing the competitiveness of financial services originating in China.

It is surmised that development of digital currency by the People’s Bank of China became official with instructions of Zhou Xiaochuan, who was the governor of the bank, and around 2016, the basic concept was settled. Digital currency trials were already underway, and beginning in April 2020, in at least four locations including Shenzhen, Xiongan, Chengdu and Suzhou, trials involving the use of wallets etc. were commenced. In addition to the foregoing, the Chinese Ministry of Commerce has indicated its policy of proceeding with using China’s digital currency during the Beijing Winter Olympics in 2022. 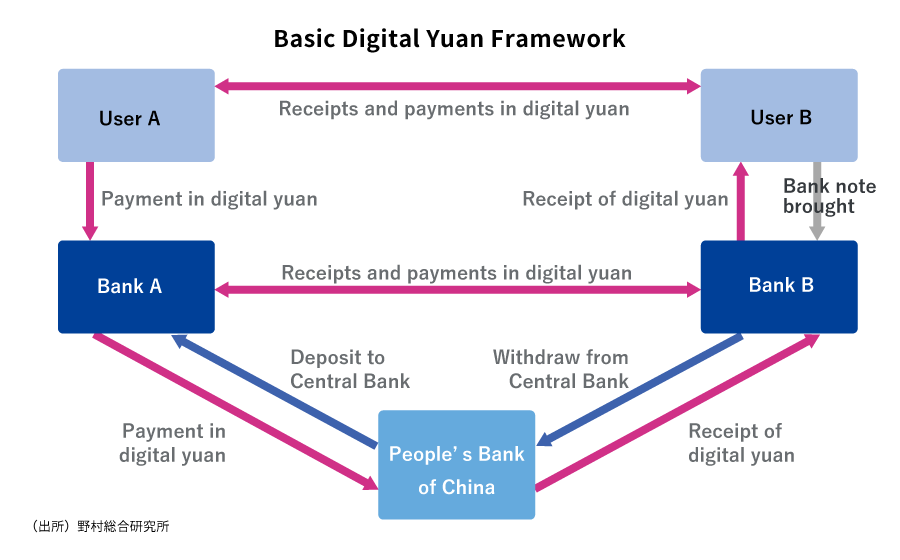 Since the beginning of this year, in demonstration experiments in Shenzhen and Suzhou, up to 10 to 2,0 million Yuan was distributed to 50,000 to 100,000 members of the general public who were chosen by lottery, and by allowing such currency to be used not only in local brick and mortar but also for electronic commerce, the trials were advanced in content in that they were large-scale and closely resembled actual use.

Such digital currency is for personal use, but the People’s Bank of China is also looking into the possibility of cross-border use of digital currency by businesses, and proceeding with development to realize trade financing blockchain platforms etc.

At the 10th Japan-China Financial Roundtable conference held in June 2020, digital currency initially came up as the topic, but the topic was changed to Covid-19-related matters. At the 11th conference that was convened online in November, CBDC was discussed from a policy perspective.

CF40 Managing Board Vice Chairperson Xie Ping, who participated in the conference as a lecturer, stated that, in discussions among major powers, the majority view is that as CBDC’s basic logic, commercial banks are “demand-driven” and “two-layered structures” that purchase CBDC from central banks through 100% reserve deposits, and to be “loosely-coupled with accounts” permitting payment between users in a peer-to-peer fashion, and that such an approach would be appropriate for China.

Further, Xie Ping stated that CBDC will improve payment and settlement infrastructures in China, and contribute to the facilitation of fair competition and the protection of public interest, and that controllable anonymity, general acceptability as legal tender, prevention of money laundering, terrorism funding, and tax evasion, and online payments are the advantages of CBDC.

Regarding Japan’s policies relating CBDC-related efforts, Bank of Japan Settlement Organization Bureau FINTECH Center Chief Yutaka Fukushima, who was a lecturer for Japan, indicated that there is a possibility that digitalization of domestic and overseas settlements will advance, rapidly raising the need for CBDC, and although introduction of CBDC had not been decided at that point in time, preparations to respond to changes going forward are important.

Implications of digital yuan to Japanese society and economy

Bank notes on payments and settlements continue to play a large role in Japan. The reason for that is, in addition to objective factors such as the relative rarity of counterfeiting and the ease of obtaining bank notes, there are subjective factors such as a conservative attitude regarding expenditures, concerns about the security of cashless means, and a focus on anonymity.

However, the move to becoming a cashless society, which is slower than some other countries, has steadily progressed, and comprises a quarter of household spending. Further, there has been a move to aim for solutions to uniformly process the flow of “money”, “assets and services”, and “information”, utilize smart contracts, and other features unique to digital currency.

On the other hand, as the Alipay example demonstrates, there is a possibility that even in Japan, in reflection of the needs of travelers from China, payments and settlements using Chinese CBDC will become more available mainly in tourist areas etc., and if introduction of CBDC in Japan becomes certain, there is the issue of how to respond to Chinese technology that is superior in terms of performance and cost.

NRI has held in-house “Workshops to Study the Future of Currency and the Future of Banks”, and has been conducting various studies regarding CBDC. We plan to announce the results of discussions that were held in FY2020 concerning CBDC viewpoints and issues in Japan in the form of an interim report in the near future.