Why Have China’s Digital Society Initiatives Been Successful?

In the barely 20 years since China embarked on creating an information infrastructure, the country has managed to build a digital society operating at the top level globally. In 2019, the scale of China’s digital economy accounted for 36.2% of GDP and had become an economic growth engine. We spoke with NRI’s Zhihui Li, author of the book Innovation: China’s Digital Powerhouse Strategy and an expert on China’s digital activities, to discuss the current state of digital society implementation in China.

In China, an integrated public-private program of “digital/social governance” supported both the prevention of the spread of Covid-19 and the subsequent economic reopening.

The Wuhan lockdown initiated on January 23, 2020 successfully reduced the number of infected persons after a February 12 peak of 15,152 new infections and was therefore lifted on April 8. This quick containment was made possible by the successful implementation of strict policies through a nationwide system. Particularly effective in the chain of control measures was the rapid introduction of digital technologies, which enabled the implementation of transparent information disclosure, the tracking of infected persons and monitoring of potential new infections, and the visualization of the citizenry’s health through digital certificates known as Health QR Codes.

Amidst the rapid spread of Covid-19 infections, the Chinese government advanced measures to construct emergency medical facilities and accommodate infected persons there as early as possible. What made this rapid identification of infected and potentially infected persons possible was the existence of voice-recognition-equipped transmitter AI robots produced by iFlytek. These robots can call 900 telephone lines simultaneously and were used to conduct health surveys of more than 27,000,000 people over two-and-a-half months in Hubei Province, where Wuhan is located. This is equivalent to the productivity of 8,000 workers in Hubei Province. By using the collected data to visualize the state of infections and facilitating rapid infection responses, digital technology played a major role in suppressing the spread of infections.

The digital economy is accelerating in “post-corona” China

One innovation that played a major role in the “post-corona” resumption of economic activity after the decline in Covid-19 infections were the “Health QR Code” digital certificates issued by local governments via smartphone apps. By making infection risk severity visible through color differences in QR codes, these certificates have enabled China’s economy to reopen safely.

At the same time, to reignite consumption, local governments issued digital coupons that utilize payment apps and life service apps. These coupons can be delivered in a short time and make it simple to set the number of receivable coupons per person etc. They also make it possible to induce expanded consumption in particular industries by “creating leverage” (requiring consumption in amounts greater than those supplied) and “limiting venues of use”. Finally, the coupons made it possible to gather all this consumer behavior in the form of data and quickly analyze the extent of digital coupon usage and other effects, thus allowing the spur of new consumption while assessing policy effectiveness.

However, digital technology applications in post-corona China have not been limited to consumer life, and are in fact accelerating in many fields, including remote work and online learning. These services are generally constructed in cloud systems to ensure that they can handle high-volume access by hundreds of millions of people – a practice so widespread in China that it has led to the birth of the term “cloud economy”. In 2020, the Canton Fair, a major import-export goods expo held in China every year, was conducted online in a “cloud fair” format. Tencent was contracted to construct the system and developed an exhibition system on its cloud conferencing system in barely two months. By connecting Chinese exhibitors with tens of thousands of buyer companies worldwide, the system seamlessly enabled 24-hour online deal making.

The rapid realization of these digital society initiatives has depended on government personal identification infrastructures and open data activities, and on business infrastructures provided by platform developers based on big data, cloud computing, AI, and other digital infrastructures.

China’s digital powerhouse strategy has prompted a shift from a quantity to a quality focus, within a top-down strategy

The reason China’s digital society initiatives have progressed to this level so quickly is, first and foremost, the Chinese government’s top-down advancement of clear policies.
The digital strategies that are formulated every few years have exhibited a shift from an initial “quantity”-centered catch-up strategy to a more recent “quality” focus driven by innovation.

The “National Informatization Development Strategy 2006-2020” announced in 2006 can be considered the first national strategy devised by China with the aim of becoming a digital nation. Under this strategy, China introduced a plan for the fundamental expansion of information infrastructures and reduction of the digital divide and set its sights on promoting e-government, rapidly increasing its number of internet users in pursuit of these aims. The lessons of the 2003 SARS epidemic also played a factor in the emergence of e-commerce ventures such as Alibaba at this time.

Under this 15-year long-term strategy, China’s telecommunications infrastructure showed dramatic “quantitative” advances. The number of internet users rose from 137 million in 2006 to 940 million in 2020; mobile users grew from 17 million in 2006 to 932 million in 2020; and the disparity in urban-rural internet penetration rates fell from 650% to 140%. The percentage of basic government services available online, which had been 57% when the plan was formulated in 2006, ultimately posted achievement rate of 100%, which was 125% of the original 2020 target of 80%. Little more than 40 years after the 1978 Opening of China reforms, the difference between China and advanced nations has shrunk significantly.

Innovation promotion has been pursued based on a clear grand design

Of course, in the process of these developments, China has faced the same challenges as other nations, including the feasibility of new market entry regulations, hierarchical segmentation, innovation dilemmas, and a shortage of cutting-edge talent. However, the government has resolved these problems by, for example, introducing follow-up regulations, creating innovation environments, taking the initiative in promoting digitalization of public services, and recruiting top talent from overseas.

One example of the government’s innovation environment creation policy is the establishment of hi-tech industrial cluster zones modeled on Silicon Valley in the United States, which are intended to foster the growth of companies involved in emerging industries such as AI. In addition to providing funding, personnel, and business environment support to the companies that reside in these zones, the government has also adopted regulation-relaxing measures to encourage business creation. The “China Speech Valley” AI cluster promoted in Anhui Province is one success story from these initiatives.

The rapid penetration of digital technology in China has been heavily influenced by the remarkably swift advances of the Chinese tech companies spearheading the change. Every successful Chinese tech company invests energy into research and development and superior talent acquisition. For example, Huawei, a world leader in 5G, spent more on R&D in 2019 than Cisco, Ericsson, and Nokia combined, and has filed as many as 4,411 patent applications in a single year. On the talent front, the company offers an unconventional incentive system aimed at inspiring employee motivation. In 2019, the company launched the “Genius Youth Program” and hired top students from around the world. With annual salaries ranging from 890,000 to 2,000,000 yuan (14,240,000 to 32,000,000 yen), the company is steadily laying the groundwork for ongoing growth. 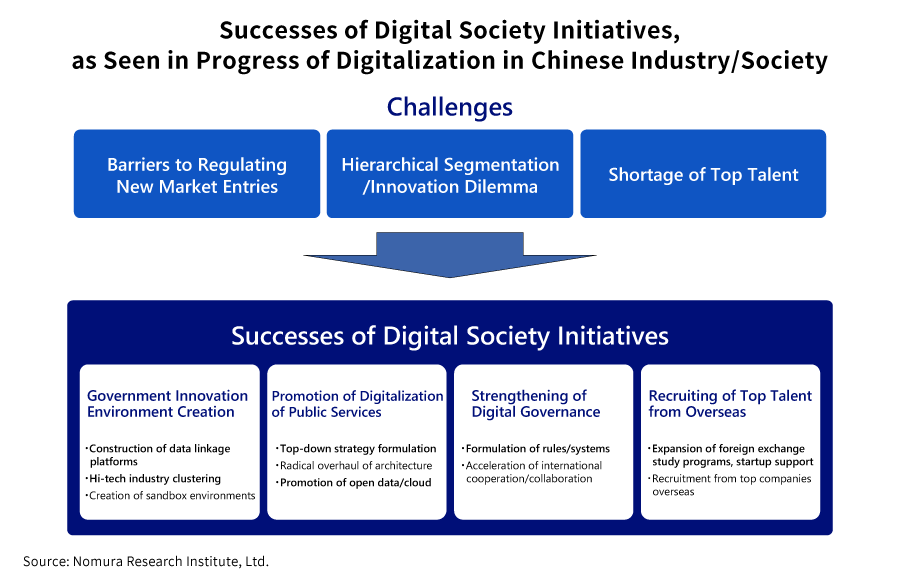 The “DX Report” released by Japan’s Ministry of Economy, Trade and Industry warns of a “2025 cliff”, predicting that DX promotion will be essential for Japanese companies to keep winning in the marketplace, and that if Japan fails at DX, it stands to lose 12 trillion yen per year beginning in 2025, approximately three times its current economic losses. For Japan to foster digital innovation in this environment, it will have to consider utilizing top IT talent and technology from overseas countries including China and promote the aggressive recruitment of overseas talent and the hiring of foreign students. Moreover, it appears that Japan will need to encourage the utilization of China’s wealth of IT talent and innovative companies in forms beneficial to both Japan and China, while objectively understanding the Chinese case studies that have taken the lead in digital society implementation, and drawing on the successes and failures China has experienced.