HOME NRI JOURNAL What Kind of Future Do We Envision with Digital Government and What Kind of Social Change Will Be Created?

What Kind of Future Do We Envision with Digital Government and What Kind of Social Change Will Be Created?

While the spread of Covid-19 has accelerated the digitalization of society, the lag in the digitalization of administrative services has become apparent. The necessity and importance of “digital government” will increase in our uncertain and drastically changing society going forward. In promoting digital government, what sort of society are we aiming for, and what kind of future do we envision? And in the process, how do you spur innovation? We interviewed Tadashi Mizuishi, Atsushi Okamura, Soichiro Okamoto, Kazuki Mori, Mitsuru Deguchi, and Taro Shimura of Nomura Research Institute (NRI).

The importance of digital government, in the spotlight again

JOIN, a pioneering example of digital government, is a citizen-participation policy-making platform in Taiwan, a system in which citizens, not the government, set social issues themselves, and the government gives an answer on a response within 60 days to proposals that have gained a certain level of support. The government’s role is to support or complement the proposals originated by citizens. 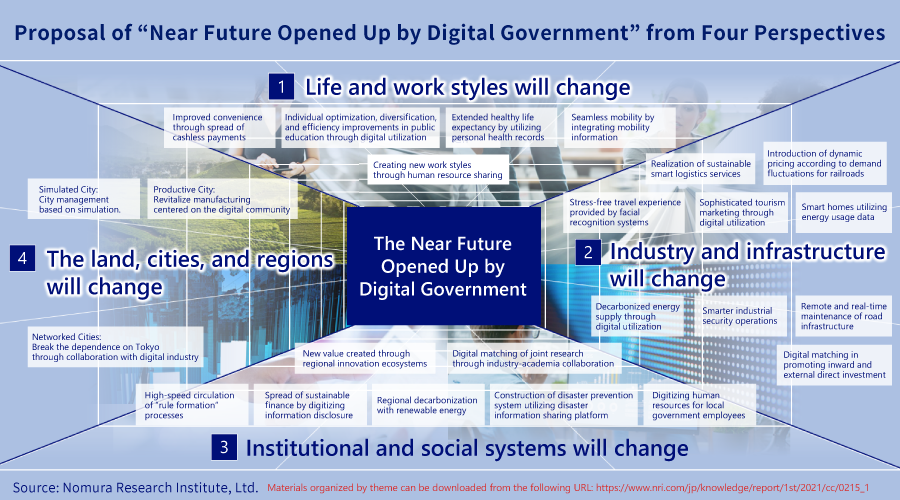 Four potential near futures that digital government will open up

“Life and work styles will change”

In the field of education, for example, education utilizing digital technology has begun against the backdrop of the GIGA school concept. The major difference from conventional public education is that the problems that children and students are presented with to tackle are individually optimized according to their proficiency levels. It is important for teachers not only to give lessons, but also to watch over children’s learning situations, checking for instance whether they understand the problems and whether their motivation is steady, and to consult and give advice.

In addition, digital utilization will enable us to quickly grasp and analyze information on learning and growth, which will make it possible to flexibly formulate evidence-based education policies.

“Industry and infrastructure will change”

Japan’s attempts at e-government are steadily progressing, but the current situation is that these moves have not resulted in sufficiently improved labor productivity and life quality. The points of change are “remotization/automation”, “ultimate optimization”, and “immediate/variable”. In other words, we will shift from on-site manual work to remote and automated services, promote ultimate optimization of services driven by big data, and shift from uniform and comprehensive services to immediate and variable services. For example, if plant safety operations that require a high degree of skill are automated, monitoring is performed in real time with cameras and sensors, and emergency response is handled by drones or rovers, production processes can be optimized, failures and accidents can be prevented, and business efficiency and safety can be improved.

To achieve this, it is necessary to share security data that is restricted to internal use on a cross-industry data platform while ensuring security and anonymity. Through this, the amount of information required for AI-based operations can be secured, and production and maintenance processes can be optimized.

“Institutional and social systems will change”

“The land, cities, and regions will change”

NRI advocates three directions as an image of the future of the land and cities. The first is “Simulated City”, or city management based on simulation. The idea is to grasp and analyze the flow of cars and people, environmental measurement information such as CO2 levels, and the like and to reflect these things in policies in real time to solve these urban issues.

The second is “Productive City”, which aims to revitalize manufacturing centered on the digital community. The idea is that if each city has a “knowledge sharing mechanism”, “shared manufacturing environment”, and “practical test opportunities provided for the city”, with digital technology serving as the core, citizen-participation-type manufacturing cycles rooted in that city will be created, and it could eventually lead to the creation of new industries.

The third is “Networked Cities”, which aims to break the dependence on Tokyo through collaboration with digital industry. There are companies with excellent resources and technological capabilities in rural areas. The idea is that local governments can act on their own initiative to connect with each other over distance, creating new industrial and economic development originating in rural areas.

Toward the promotion of digital government

What is needed going forward to promote digital government is the formulation of a study platform that involves various stakeholders including as the government, private companies, and residents.

NRI will support the formulation of various study platforms for the promotion of digital government, and will continue to make various recommendations going forward.