HOME NRI JOURNAL Turnaround in Strategy of Alibaba, Tencent, and Ant Group and its Background

Turnaround in Strategy of Alibaba, Tencent, and Ant Group and its Background

Alibaba, Tencent, and Ant Group have transformed into tech leaders in the fields of AI and cloud computing. These platformers are representative companies supporting the rapid advance of digital China, and have at the same time brought about a new social problem of how to manage the increase in their influence caused by monopolization and positioning as social infrastructure.
We asked Zhihui Li of the Center for Strategic Management & Innovation about these three companies’ recent turnarounds in strategy and the increased regulation by the Chinese government on these platformers in the background.

The central focus of China’s platformers has shifted from B2C, namely, internet business centered on consumers, to B2B2C, which involves industry, and Chinese society has entered a stage of moving towards digital revolution. Platformers such as Alibaba, Tencent, and Huawei are leading the digital revolution by providing the technology they have developed to traditional business operators.

Alibaba took support for companies’ digital reforms as an important strategic opportunity, and is using the Alibaba Business Operating System (ABOS) to support companies that offer consumer products to be able to perform end-to-end digital management.
It also launched its “Five New” strategy, which includes not just distribution but also manufacturing, finance, technology, and data platforms, aiming to further evolve its ecosystem. In the field of “new manufacturing”, which is one of the “Five New”, it has worked to shift from a model of standardization and mass-scaling in apparel to personalization and smartification, and has taken on the challenging theme of manufacturing 2,000 different products in five minutes, rather than manufacturing 2,000 of the same product in five minutes. 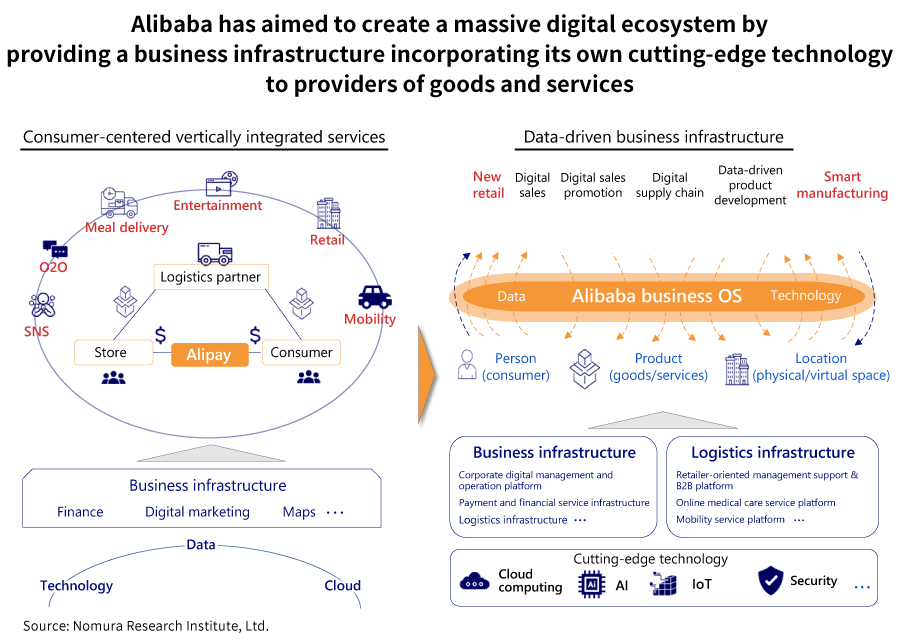 Tencent restructured its organization from one centered on goods and services to one that is customer-centered, and consolidated everything cloud-related into its “CSIG (Cloud & Smart Industries Group)”.
With this organizational reform, it aims to provide cloud computing, AI, and big data capabilities to various industries together with a corporate version of WeChat and mini programs, and to support industrial digitalization through its open platform.
For example, in its Smart Retail solution, customers are encouraged to become digital members by a process in which a customer is invited into a store with the corporate version of WeChat and mini programs, a communication experience is promoted through individual recommendations when it has been detected that the customer entered the store, and the customer performs facial recognition-based payment and is registered as a member by consenting to facial recognition. Further, members are encouraged to return to the store through its app, and individual recommendations are carried out in a data-driven manner. Moreover, information on customers coming from offline, online, call centers, and the like is seamlessly linked through a data middle platform. In addition, Tencent’s data analysis and visualization tools can be used leverage data accumulated on this platform in order to predict purchases, analyze consumer preferences, analyze consumer attributes, and the like, and leads to increased purchases by consumers by encouraging them to return to stores and giving personal recommendations via the app.
A well-known supermarket that introduced the solution achieved a large increase in sales by switching to online sales. During the week from January 24 to 30, 2020, when people were refraining from going outdoors and many customers could not go to stores because of the Covid-19 pandemic, internet sales for this supermarket multiplied more than sixfold year-on-year. The number of fresh food deliveries in the same region at its peak exceeded 300,000 per day, yet the company was able to handle this demand without a hitch.
In this way, Tencent has opened its technology and business infrastructure and is transforming into a company that promotes digitalization among its partner companies as well as industry and society at large.

Ant Group is a leading company at the fore of FinTech in China and has three primary pillars of business. The first is its digital payment and lifestyle service business centered on Alipay, which has been the core of its business until now. The next is its digital FinTech service, which is a business providing unsecured loans, credit scoring services, and the like to consumers. The last is its enterprise-oriented innovation business composed of the “Ant Financial cloud” and “AntChain”, a blockchain platform.
Currently, more than 60% of Ant Group’s income relies on its digital FinTech service, with nearly 40% of that coming from credit tech. These are microloans for consumers; when a consumer applies for one using the Alipay app, he is matched to a service of an affiliated financial institution, and the consumer receives financing from the financial institution via a bank under the Ant Group umbrella. This model allows financial institutions to attain a point of contact with many consumers, SMEs, and micro-enterprises that they were unable to approach in the past.
The credit balance of this credit lending service as of June 2020 was 2.1 trillion CNY (roughly 32 trillion JPY), making the company substantially China’s largest consumer finance service provider.
However, immediately prior to Ant Group’s listing, China’s regulatory authorities announced the Interim Measures for the Administration of Online Microfinance Business, which regulate online microfinance business. The measures require that business operators that provide credit lending services contribute one-third of the funds used for financing. For Ant Group, most funds involved in financing come from financial institutions, with the group’s own funds making up a mere 2%. This regulation will inevitably cause a major impact on its earnings. This is the reason a sudden brake was put on the group’s listing.
Meanwhile, Ant Group, which also has a side as a tech company, has its core competitiveness in the five core technologies with the acronym BASIC: Blockchain, AI, Security, IoT, and Cloud. It has the highest number of patent applications for blockchain technologies in the world and has commercialized its technologies and sold them externally in the form of AntChain BaaS. Its AI-based risk control system has been adapted to fraud detection and risk assessment to protect payment safety. It has also developed its own cloud system optimized for financial services, achieving high availability of 99.99% and otherwise clearly having core competence not possessed by ordinary financial institutions. Going forward, it will clarify the boundary between its financial services and technology services and reconstruct a business model in line with regulations.

As seen in the authorities’ intensified regulation that led to Ant Group’s delayed listing, the Chinese regulatory authorities have shifted from single-minded innovation to a policy of development with order while maintaining fairness and competitiveness. One reason for this is the fact that the lives of Chinese people are almost unimaginable without the services provided by Alibaba and Tencent, to the extent that people say, “We live in AT*”.
Further, payment services like Alipay and WeChat Pay account for a majority of the market share and are substantially relied on for payment infrastructure. Moreover, by taking advantage of their digital points of contact with consumers, they have also come to be used not just as an entrance to consumer services but also for public services like distribution of health codes for determining whether an individual has a risk of Covid-19 infection and digital consumption vouchers for promoting consumption after Covid-19. As platformers have been transformed into a form of infrastructure in this way, the boundary between “public” and “private” has become blurred, and the government has started increasing regulation of platformers that have captured a monopolistic status. Alibaba, Tencent, and Ant Group must not just come up with new growth strategies with a shift from B2C to B2B2C, but also achieve a strategy turnaround to cope with these regulations.