Controlling global warming and forming a sustainable economic society while enhancing convenience and growth potential through the digitalization of economic activities, are the two top challenges for Japan’s post-Covid economy. Nomura Research Institute (NRI) supports the efforts of companies and governments from various angles to address these challenges. We interviewed Tetsuya Inoue and Junko Ishikawa, who are familiar with how to establish both the kind of sustainable finance that can smoothly supply the necessary funds for responding to climate change, and digital currencies that streamline payments and settlement and enable advanced financial services.

In this article, based on the discussions of the Japan-China Financial Roundtable and the Study Group on the Future of Currencies and Banks, we will introduce the latest trends in Japan and overseas in sustainable finance and digital currencies, which are the top challenges for post-Covid economics and finance not only in Japan but also in major countries. We will also address their implications for Japan, and NRI’s activities in terms of policy and systems.
NRI has been holding the Japan-China Financial Roundtable in collaboration with the Chinese think tank China Finance 40 Forum (CF40) as a forum to consider the economic and financial challenges faced by both countries. The 12th meeting held remotely on June 5, 2021 took up “sustainable finance”, which is rapidly gaining importance as a pillar of long-term economic policy between Japan and China. Participants at the meeting discussed what progress has been made in the implementation of green finance research in terms of policy, what roles private businesses in the financial sector can play, and how Japan and China should cooperate in these areas. Through the discussions, it was confirmed that the two countries have shared values relating to sustainable finance, and that their approaches also have viable options in common.

Discussions at the Japan-China Financial Roundtable on Sustainable Finance

Among the speakers on the Chinese side, Mr. Xu Zhong, a CF40 member and deputy secretary of the China National Association of Financial Market Institutional Investors, explained the efforts to promote the sound development of the green bond market in China from a private sector perspective, and pointed out the need to develop a green bond market consistent with international standards.
Mr. Gao Shanwen, another speaker on the Chinese side and chief economist of Essence Securities, said that the Chinese government’s industrial policies to improve efficiency in the materials sector have been effective in reducing carbon dioxide emissions, and as a result, they have contributed to “greening” the Chinese economy, increasing the added value of material production, and optimizing the balance between supply and demand.
Meanwhile, Mr. Dai Okada of Japan Financial Services Agency, one of the speakers on the Japanese side, pointed out the importance of strengthening climate change risk management in financial institutions and promoting the formulation of robust business strategies based on common scenarios, and expressed his hope that dialogue between financial institutions and business partners would play a role in building new businesses for dealing with climate change and contributing to the sustainable development of local communities.
Ms. Tokiko Shimizu of the Bank of Japan, another speaker on the Japanese side, observed that the organization of data and the establishment of risk-gauging methods are issues faced by central banks in dealing with climate change, and explained that ensuring market neutrality in terms of consistency with central bank mandates and resource allocation is an important issue for any “greening” of assets held for monetary policy purposes.

The Task Force on Climate-Related Financial Disclosures (TCFD), established under the Financial Stability Board (FSB), an international conference for financial system stability, made a recommendation in June 2017 that ascertaining the risks and opportunities of climate change through scenario analysis would be meaningful for the planning of corporate strategy. Since then, this recommendation has had a great impact, with international organizations progressing in the formulation of scenarios, and with a growing understanding of the utility of scenario analysis in risk management, among other things.
Scenario analysis has also been introduced at major Japanese banks, with Sumitomo Mitsui Financial Group having first released the results of its scenario analysis in April 2019. Then in October 2020, the results of the three major banks were announced. Since then, each bank has continued to improve the accuracy of its scenario analysis by expanding the target sectors and adding risk types.
The TCFD recommendations are based on the use of external scenarios, but the Network for Greening the Financial System (NGFS), which was established in 2017 as a voluntary initiative of financial supervisory authorities and central banks, released its first social common scenarios in 2020, and in June 2021, the scenario data of each country consistent with the social common scenarios was released for the first time. These scenarios are expected to be used as tools for financial supervisory authorities and central banks to understand financial risks associated with climate change, and it is hoped that they will also contribute to the formulation of business strategies for both financial institutions and private businesses. Attention is being paid to what kind of changes will be brought about both through financial supervision by the authorities and through changes by financial institutions and private businesses in their practices. 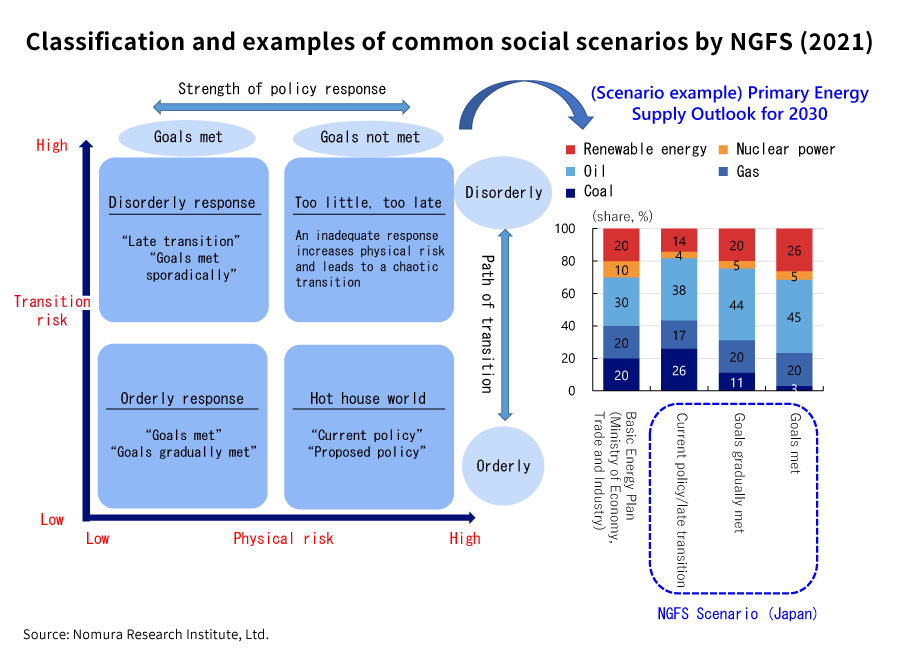 Since July 2020, to get a view of the potential of central bank digital currencies (CBDCs) and the changes in financial services that they would entail, NRI has been inviting researchers and practitioners to participate in a “Study Group on the Future of Currencies and Banks”. In the first phase, the discussions focused on the significance and challenges of CBDCs in light of the characteristics of Japan’s financial economy, referring to discourse in major overseas countries. The results were announced in an NRI “interim report” in April 2021, and were shared widely with policymakers, financial institutions, industry groups, and other experts by holding a remote forum in May with the members of the study group as panelists.
The main issue in the study group’s first phase was how a CBDC could contribute to the steadily progressing transition of household spending to cashless payments and the digitalization of business-to-business transactions, and given that the provision of financial services to households and companies will still be up to private businesses after the introduction of a CBDC, the study group confirmed the importance of designing and framing a CBDC that can promote private sector innovation.
In addition, despite the growing need for cross-border payments in conjunction with the globalization of economic activities, high costs and the length of time required for settlement are seen as problems. Not only that, but correspondent banking, which involves payment networks linking banks to each other, is also showing signs of shrinking due to high costs. For this reason, central banks in major countries are making efforts to improve the efficiency of cross-border payments, mainly by international organizations, but the study group also raised the possibility of overcoming these challenges through the use of CBDCs.

Playing a “Brainstorming” Role toward the Digitalization of Payments and Settlement

The focus of discussions on CBDCs is gradually shifting from why to how. Even in major overseas countries, such as in the euro area, the United Kingdom, Sweden, and China, studies on the design and framework of CBDCs are in full swing alongside technological development. At the same time, there is movement toward the establishment of international standards through joint research by the Bank for International Settlements (BIS) and central banks in different countries. The significance of CBDCs is not limited to the efficiency and sophistication of payments and settlement; they also have implications for competition in digital technology and financial services, and even among international currencies themselves, so discussions in Japan also need to be conscious of trends in major overseas countries.
Under these circumstances, the fact that the Bank of Japan started a proof-of-concept in April 2021 has also been taken by financial institutions and other private business operators as a clarification of the envisioned timeline for the introduction of a CBDC, and there are some signs that institutions are searching out new business models based on a CBDC.
When it comes to introducing a CBDC into a complex and highly developed financial system such as Japan, in order to fully demonstrate the results, the focus will be on the allocation of roles between the central bank and the private sector. Above all, most important are the mechanisms for collecting and returning data on transactions and users, the role of the private sector as an intermediary in the transfer and registration of CBDCs, and the establishment of a stable relationship between CBDCs and bank deposits. Regarding these points, in July 2021, the Study Group on the Future of Currencies and Banks began second-phase discussions in order to make recommendations on measures suited to Japan’s environment. Including the activities of the study group, NRI will continue to play a “brainstorming” role in both public and private sector initiatives toward the digitalization of payments and settlements.