From August 6 to 9, 2021, Nomura Research Institute (NRI) conducted an Internet questionnaire of 3,131 individuals ranging in age from their 20s to their 60s in all 47 prefectures nationwide regarding their awareness of choice with respect to “eco-friendly foods” that contribute to global warming prevention.
We interviewed Noriko Sano of NRI, who conducted the survey, about the relationship between the awareness of global warming as a crisis and the awareness of eco-friendly food choices, issues that emerged from the survey, and the efforts needed from food business operators.

On August 9, 2021, the IPCC (Intergovernmental Panel on Climate Change), a UN expert meeting, said that humans are the cause of global warming, and by 2040 the temperature is very likely to rise by 1.5 degrees Celsius compared to before the Industrial Revolution. If the temperature rises by 1.5 degrees Celsius, 10-year heavy rainfall events will occur 1.5 times more frequently, and abnormal temperatures will occur 4.1 times more frequently. It predicted that if worldwide carbon dioxide emissions were limited to 500 billion tons after the beginning of 2020, there would be a 50% chance that the temperature increase would be kept to 1.5 degrees Celsius, suggesting that countermeasures are urgent. Today, the world’s carbon dioxide emissions are about 40 billion tons per year, which means they will reach 500 billion tons in the next 12 years. 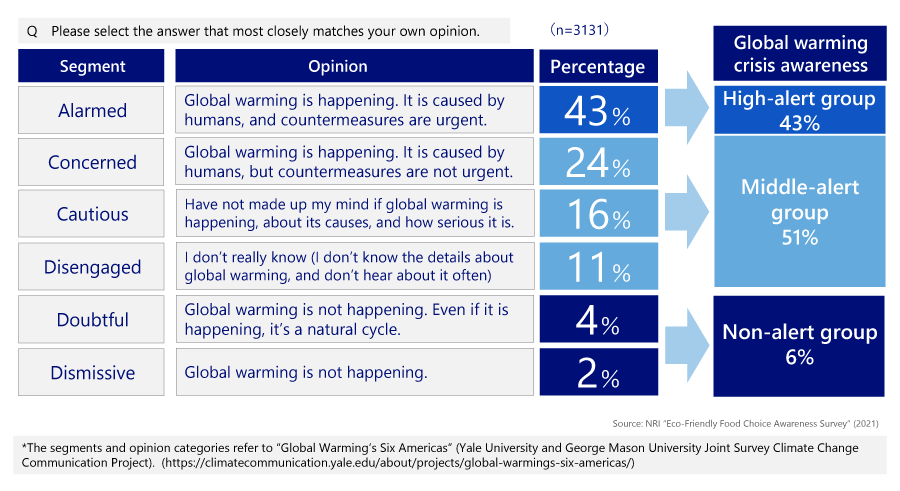 60% of people want to choose “eco-friendly foods”, but don't know which are eco-friendly

The most common answer as to what kind of eco-friendly foods people want to prioritize choosing was “foods that use containers and packaging made of natural materials.” 60% of all respondents answered that it was a high priority, and in the high-alert group this answer climbed to just under 80%. The survey also found that, when asked about what bothers them when buying food, one in three people cite the fact that “there is a lot of plastic in containers and packaging”.

Going forward, a system needs to be created to make it easy for the many consumers who want to choose eco-friendly foods to do so.
The most important thing is to answer the question, “Is it really eco-friendly food?”
The results of the survey show that respondents want to prioritize, or are highly interested in prioritizing, choosing any foods whose “production methods” (e.g. farming methods), “ingredients”, “electricity consumption”, “containers or packaging” have been revised, or for which efforts have been made with respect to “greenhouse gas absorption.” In particular, it can be said that food products with revised containers, packaging, and ingredients make it easier for consumers to concretely understand their contribution to global warming prevention.

In doing so, permissible food prices differ depending on the consumer group and food brand, so it is necessary to set “target prices” case-by-case and leverage IT (digital technology) and collaboration to ensure efficiency improvements in the course of production, processing, distribution, and sales to suppress price increases. At the same time, it is necessary to approach “target prices” by devising ways to increase added value and unit prices for food through switching to processed products and branding.

Consumers also find it important to be able to easily select eco-friendly foods that have successfully implemented these kinds of global warming prevention efforts. According to the survey, one in two people answered that they want to check an eco-label (58%), are interested in specialty stores that carry eco-friendly foods (56%), and would switch to choosing eco-friendly food if they receive reward points (58%). It is necessary to take a multifaceted approach and create a system that makes it easy to choose eco-friendly foods.