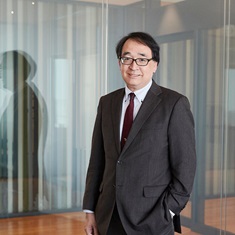 There is growing public speculation that the Tokyo 2020 Olympic and Paralympic Games will be canceled due to pandemic risk. Even if the Games are held, a decision on how many domestic spectators to allow will not be made until June. With less than two months to go until the event is scheduled to begin, this is highly unusual. In another headwind for the event, the US government on May 24 issued a Level 4 travel advisory—the highest cautionary level—advising its citizens to avoid all travel to Japan because of rising COVID-19 case numbers.

Much of the expected economic benefit from the Tokyo Games vanished in March, when it was decided to ban foreign spectators from traveling to Japan. Overseas visitors tend to spend far more money than domestic spectators. In 2019, for example, foreign tourists spent over ¥4.8trn in Japan in so-called “inbound consumption.” Originally the Olympics were expected to attract about a million spectators from other countries, with each spending an average of ¥151,000 during their stay.

It was therefore estimated that overseas spectators would spend a total of ¥151.1bn on accommodation, food and drink, and transportation during their time in Japan. That potential demand disappeared with the decision not to accept foreign visitors, as I noted in a Japanese-language article on March 4, 2021.

In an April 2017 report by the Tokyo government titled “Summary of Estimated Economic Effects of the Tokyo 2020 Games,” total consumption expenditures by all Olympic and Paralympic Games participants and spectators (including transportation, accommodation, food and drink, shopping, and use of various facilities) were estimated at ¥207.9bn. Our estimate of ¥151.1bn in inbound consumption by overseas visitors represents more than 70% of that figure, which underscores how little domestic spectators are expected to spend.

Many of the Japanese spectators are likely to be coming from outside of Tokyo to watch the Games, but they will not spend nearly as much on accommodation or shopping as their foreign counterparts would have. It was projected that many of the overseas visitors would not only attend the Games but would also take the opportunity to enjoy sightseeing and shopping in Japan. Overseas visitors add to the nation’s GDP when they eat out in Tokyo (their expenditures are counted as exports), but whether domestic spectators eat at home or in Tokyo has no bearing on GDP data.

The Tokyo government report noted above estimated that the Games would directly increase Tokyo demand by ¥1,979bn. Of this figure, ¥350bn was expected to come from the construction of new permanent facilities (including city facilities and the new National Athletic Stadium), which will add to GDP whether the Olympics are held or not. The remaining ¥1,629bn will depend on whether the Games are held and on what sorts of limitations are placed on spectators.

Subsequent events further affected the likely economic benefit. First, the Games were postponed by one year, resulting in additional expenditures. Second, the delay prompted a number of cost-cutting measures. Third, it was decided in March 2021 that foreign spectators would not be allowed to attend. Finally, there was additional spending on measures to prevent COVID-19 infections at the Games.

It is possible to estimate how these factors have impacted on the potential economic benefit from the Games using the fifth version of the Tokyo Organising Committee’s budget, which was released in December 2020.

It is estimated that some 600,000 tickets were refunded after the decision was made not to allow spectators from overseas. Our estimate assumes this revenue can be fully recouped by reselling the tickets to local residents. 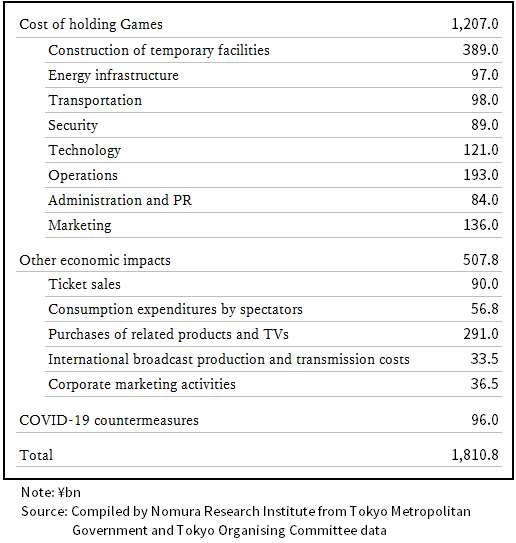 Losses estimated at ¥147bn if no spectators are allowed

The government is scheduled to decide in June how many domestic spectators to allow based on the current state of the pandemic. We think there are almost certain to be some restrictions on the number of spectators, and there is a real possibility that no one will be allowed to watch.

We estimated the likely economic impact for three scenarios: one in which half the original number of spectators were allowed, one in which only a quarter were permitted, and one in which the Games are closed to spectators. It was assumed that planned ticket sales of ¥90bn would drop to one half that amount, one quarter that amount, or zero. We also assumed that spectators’ “consumption expenditures” in Figure 1, which does not include overseas spectators, would decline by an equal proportion. Decision should focus more on infection risk than on economic losses

The impact of canceling the Games entirely would be somewhat more consequential. Still, the estimated economic loss of ¥1,810.8 billion would represent just 0.33% of nominal GDP, which is not enough to alter the underlying direction of the economy.

The economic losses from restricting the number of domestic spectators or canceling the Games altogether would not be particularly large relative to those generated by a state of emergency. If holding the Games were to prompt a surge in COVID-19 case numbers, forcing the government to declare another state of emergency, the resulting economic losses could be substantially larger.

This suggests that when deciding whether to hold the Games or how to limit the number of spectators, the government needs to focus mainly on the increased risk of new infections that the Games would bring, rather than the immediate economic losses.