Was BOJ’s YCC adjustment a rate hike or not?

The BOJ’s 20 December decision to widen its YCC program’s 10y yield band came as a big shock to financial markets. Up until the last moment, the BOJ had denied any intention of making such an adjustment, à la its surprise decision to adopt a NIRP in January 2016. While the BOJ deserves credit for shifting to a more flexible policy stance and mitigating the side effects of its monetary accommodation, the market volatility unleashed by its YCC adjustment was problematic.

In the FX market, the yen strengthened against the dollar and continued to do so even after the Tokyo market closed for the day, with USD/JPY briefly trading through ¥131, a level last seen in August. USD/JPY’s peak-to-trough range on the 20th was ¥7, seemingly an overreaction to a roughly 20bp rise in the 10y JGB yield. The FX market apparently perceived the BOJ’s widening of its 10y yield band as a prelude to further policy adjustments.

On the 21st, major Japanese newspapers ran headlines featuring phrases such as “BOJ policy pivot” and “de facto rate hike.” With the BOJ sticking with its QQE+NIRP+YCC framework aimed at attaining its 2% inflation target, BOJ Governor Kuroda has emphasized that the latest YCC adjustment is neither a rate hike nor an exit strategy’s opening gambit. Financial markets and the media are not buying his narrative.

Considering that YCC’s 10y yield band has been widened multiple times since YCC’s inception in September 2016, one could reasonably argue that the latest adjustment is another dose of incremental YCC flexibility, not a de facto rate hike. By the same token, however, the notion that the latest YCC adjustment is a de facto rate hike is also understandable. Indeed, the BOJ itself had previously refused to allow the 10y JGB yield to rise by raising the ceiling of its YCC band because it claimed that doing so would be a de facto rate hike with adverse economic consequences. It now says its latest YCC adjustment was not a rate hike and will not adversely affect the economy. Its about-face on this point has confused many people.

Whether “de facto rate hike” proves to actually be an apt characterization of the latest YCC adjustment will depend on the level at which the 10y JGB yield eventually settles. If it ends up settling in the vicinity of 0.5%, the new ceiling of the BOJ’s 10y yield band, the YCC adjustment could perhaps be characterized as the equivalent of a 25bp rate hike. However, with long-dated UST yields trending downward on expectations of a Fed pivot, the 10y JGB yield may settle somewhere between 0.3% and 0.4%, only modestly higher than its 0.25% level preceding the YCC adjustment. Such a small increase might not qualify as a de facto rate hike.

Another metric by which to assess whether the YCC adjustment was a de facto rate hike is its restrictive effect on the economy. Even if the 10y JGB yield were to rise a full 25bp, the maximum allowed by the yield band’s new ceiling, the resultant negative economic impact would be relatively muted. From this perspective as well, December’s YCC adjustment may not merit being called a de facto rate hike.

The real trade-weighted yen index, a gauge of Japanese companies’ international price competitiveness adjusted for price differentials between Japan and its trading partners, is in a downtrend dating back to the 1990s (see chart). Its downtrend presumably reflects Japan’s waning national power and loss of its comparative advantage in technology. Meanwhile, Japan’s 20-year average core CPI inflation rate is 2.4ppt lower than the US’s. From a purchasing power parity standpoint, this inflation rate differential can be construed to mean the yen’s nominal exchange value against the dollar is in an appreciation trend with a slope of around +2.4% per year. The real trade-weighted yen index’s decline over the same 20-year timeframe equates to roughly -1.8% per year. Based on these calculations, the yen has, on average, been depreciating 1.8% annually in real terms over the medium- to long-term while nominally appreciating at a modest 0.6%annual rate (2.4% - 1.8%). 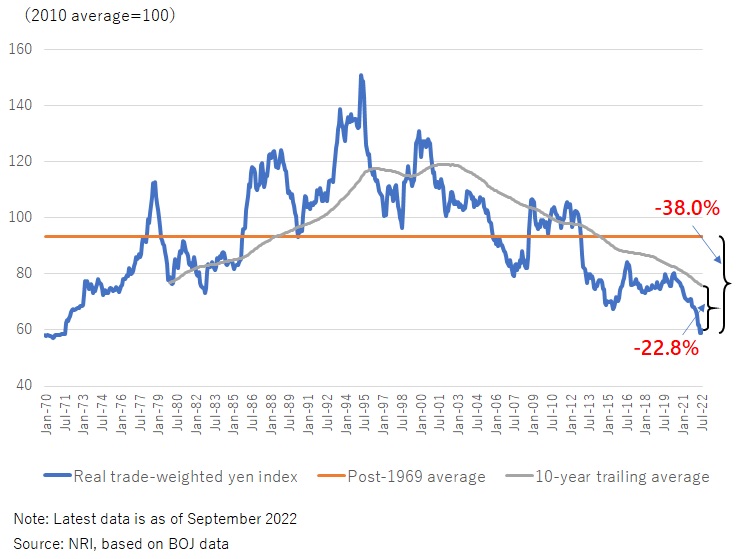 Over the past 10 years, however, the real trade-weighted yen index has drifted far below its 10-year trailing average, implying that yen has long been valued at a discount to its equilibrium level (see chart). This yen weakness is due to two factors: the BOJ’s monetary easing since 2013 and the Fed’s aggressive rate hikes in 2022. Recently, markets have started to price in a Fed pivot and, since the BOJ’s latest YCC adjustment, prospective BOJ policy normalization also. With both of the factors previously weighing on the yen starting to change, the yen’s undervaluation over the past 10 years could correct.

The equilibrium USD/JPY rate inferred from the real trade-weighted yen index’s 10-year trailing average is around ¥110. As both Fed and BOJ policy adjustments get priced in and subsequently come to fruition, USD/JPY is likely to revert toward this ¥110 level over the next several years.

Even after Kuroda’s successor takes over in April, the BOJ is not expected to immediately exit from its NIRP or otherwise start normalizing policy. Amid an escalating risk of yen appreciation and economic deterioration, the BOJ will likely tread cautiously in terms of raising short-term rates. Particularly with markets pricing in Fed rate cuts, if the BOJ were to raise its short-term policy rate, the resultant combination of BOJ tightening and Fed easing could catalyze precipitous yen appreciation against the dollar. Such an outcome is not an option for the BOJ.

Although I currently do not expect the BOJ to exit from its NIRP until mid-2024 at the earliest, speculation about BOJ policy normalization will likely become entrenched in financial markets in response to December’s YCC adjustment widely perceived as a de facto rate hike. Such speculation increases the risk of yen appreciation. I see USD/JPY trading at ¥120 at year-end 2023. The yen will likely strengthen further in 2024.