In Part 4, I wrote the BOJ’s ETF holdings would likely end up staying on the BOJ’s balance sheet because the government has little incentive to purchase them as long as the ETFs (and their dividend distributions) are earmarked as a funding source for the National Treasury. If the government were inclined to use the ETFs for some other purpose, it may have more of an incentive to take them off the BOJ’s hands. In this installment, I propose an alternative way for the government to put the ETFs to use.

I propose gifting the BOJ’s ETF holdings to the public

My proposal is that the government purchase a portion of the BOJ’s ETFs and gift them to young adults in small annual installments in the aim of expanding securities ownership in Japan. Only about one in 10 Japanese own securities. More specifically, 13% own equities and 10% own investment trusts as of 2021 according to the Japan Securities Dealers Association’s triennial National Survey on Securities Investment. Among 20-29 year olds, these percentages are even lower at 4.6% and 5.3%, respectively.

The percentages of Japanese who owned equities and investment trusts in 2021 were nearly unchanged from the JSDA’s 2018 and 2015 surveys. In other words, even during a period when tax-advantaged NISAs and iDeCo accounts made their advent amid a lengthy equity bull market driven by Abenomics, securities ownership was essentially stagnant. Tax incentives, while important, are clearly not sufficient to drive expansion of securities ownership. They must be combined with other, different measures.

Obstacles to becoming an investor typically cited by people without investment experience include having to study to learn about investing, save enough money to invest and open a securities account at a financial institution. While I concur that lowering the bar to becoming an investor is important, I have long advocated creating a program that would give as many people as possible a chance to experience securities ownership . Gifting ETFs from the BOJ holdings to the public would enable people to get a taste of owning securities without risking their own money. The experience would hopefully spur more people to start investing their spare funds or at least take an interest in economic and financial matters.

Distribute ETFs to young adults in micro-installments over 10 years

In terms of how and to whom to distribute the ETFs, I propose gifting them to young adults in small, equal installments over, say, 10 years from when the recipient reaches adulthood (i.e., from age 18 through 27). The idea of gifting the ETFs to newly minted adults was first proposed by my colleague Sadakazu Osaki. I added the concept of splitting the gift into 10 annual installments because I believe receiving a series of distributions would be more likely to have the desired effect than a once-in-a-lifetime gift (only in the year in which the recipient turns 18).

Additionally, because the objective of gifting the ETFs is not to provide financial support but to whet the recipients’ appetite for investing, the ETF distributions should be modest in value. Smaller distributions would entail less fiscal strain. Even ¥50,000 worth of ETFs distributed in 10 annual ¥5,000 installments, for example, should be sufficient to achieve the intended effect.

If we assume that 1.2mn Japanese turn 18 every year and the ETFs will be distributed in annual installments of ¥5,000 per recipient starting from 2025, the total distributions would increase by ¥6bn annually for the first nine years (through 2033) before plateauing at ¥60bn per year from the 10th year onward (row [1] in the table). The dividend income that the government would forgo by gifting the ETFs instead of continuing to own them would be a real fiscal cost (see Part 2 for how the government might fund its acquisition of ETFs from the BOJ). If the ETFs hypothetically pay a 2.5% dividend yield, this cost would max out at ¥1.5bn per year (row [2]). I think ¥1.5bn per year is an eminently reasonable price to pay for more widespread securities ownership.

Table: Illustrative example of ETF distributions (assuming annual distributions of ¥5,000 of ETFs per recipient for 10 years from age 18 onward) 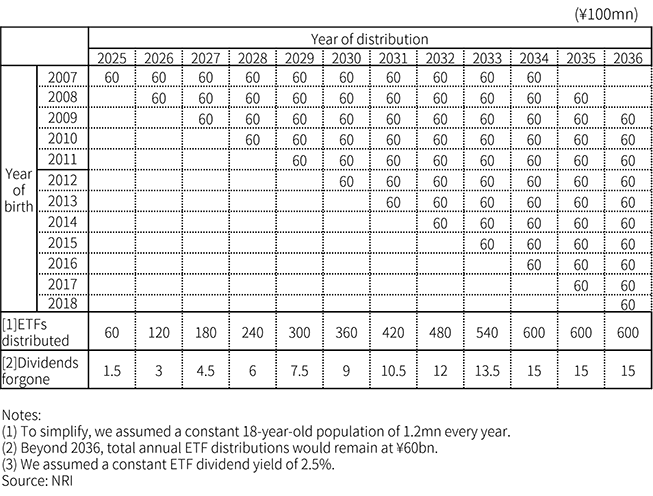 Perhaps the easiest way to distribute the ETFs would be to deposit them into securities accounts opened by the recipients themselves. However, this approach would require the recipients to go to the trouble of not only opening a securities account but also notifying the government of their account details. These steps could very well pose a prohibitively high hurdle for teenagers dipping their toes into the investment world for the first time. I think a distribution method that requires as little effort as possible from the recipient’s standpoint would be best.

I propose distributing digital or paper vouchers exchangeable into ETFs at a financial institution of the recipient’s choice. With this approach, the ETFs could be distributed more efficiently than by directly delivering them to the recipient from the start. The vouchers would be a government promise to convey ETFs to the recipient named on the voucher . They could be issued in a manner that maximally leverages digital technology and minimizes the risk of fraud and counterfeiting.

The 2022 Basic Policy on Economic and Fiscal Management and Reform, approved by the Cabinet on June 7, revealed the government is formulating a plan to double households’ asset-based income. Scheduled to be released by year-end, the plan will include a new program as a third pillar alongside expanded/improved NISAs (Nippon Individual Savings Accounts) and iDeCo (individual defined contribution) retirement accounts. Even the government apparently recognizes not only NISAs and iDeCo accounts’ importance but also the need for additional measures. If so, perhaps it will consider distributing the BOJ’s ETFs to the up-and-coming generation as the third pillar of its plan to double asset-based income.