As opposed to maintaining existing businesses, creating the pillars of a new business is no easy thing. However, with start-up companies continuously establishing new digital businesses and reshaping industries, even major corporations will be unable to survive without undergoing self-reformation. Hiroshi Masutani, who has been involved in launching new businesses for many years at NRI, is determined to leverage NRI’s strengths in promoting and assisting its own digital reformation efforts and those of its client companies.

Gaining a President’s Perspective by Launching a New Business

For several years after joining the company I was involved in maintaining and managing systems for Nomura Securities, but then in 1995 four colleagues and I launched an information security business using our internal startup program. The business grew steadily, and in 2000 we spun it off as a subsidiary called NRI Secure Technologies (NRI Secure). I was assigned as the manager of one of the three departments we had at the time. Six years later in 2006, I was appointed as the President of that company, and that was a really major turning point in my career. Decision-making as a president is a wholly different matter from decision-making as a department manager. You’re compelled to decide on important matters where there are trade-offs, and there’s nobody there to shield you. And excuses won’t cut it even if your assumptions or circumstances change. You still have to produce results, and to strike a balance between short-term performance and sustained growth. Every day was a series of trial-and-error, but it was really character-building.
I returned to NRI in 2015, and I’m currently heading the Digital Platform Innovation Department, my mission being to create the pillars for NRI’s next businesses using digital technology as we move further towards becoming a digitalized society.

Conventionally speaking, we’ve grown our business with a focus on “Corporate IT*1”, which involves using IT to streamline operations. Now, however, we’re in the age of Digital Transformation, or DX, where digital technology is changing business itself. What we need is to refine our capabilities in the area of “Business IT*2”, where IT is used to generate new value.
NRI’s digital strategy entails firmly supporting our customers’ digital reformation efforts along two axes, namely through “process reforms (DX 1.0)”, which use IT to transform a company’s supply chain processes, and “business reforms (DX 2.0)”, which are for generating new cross-industry value by combining our customers’ data and services.

Needless to say, the more successful a company has been, the more difficult it will be to enact reforms on its own. And oftentimes such a company will lack personnel who are suited to tackling a new business. To break through these challenges, NRI has chosen to undertake activities like creating joint ventures with companies seeking to make reforms, seconding personnel to them, and running businesses jointly with them, thereby helping to propel them forward. Rather than being a mere provider of system or consulting, NRI proactively drives our customers’ business onward by sharing the results and the risks together with them.

NRI has consultants who are well-versed in a variety of industries, as well as engineers who incorporate the latest technologies in developing IT. Moreover, we have ties to academic and research institutions and to various start-up firms. Just as NRI has created businesses by linking together our consultants’ navigation capabilities and our engineers’ solutions, I believe that leveraging NRI’s “linkage capabilities” will enable us to generate new businesses that will deliver value unlike anything we’ve seen before.

Breaking Down Extant Organizations and Cultivating Personnel Who Can Operate Independently

Digital reform goes hand in hand with organizational reform. Something I learned at NRI Secure is that with a small, independent organization, it’s easy to hire and train suitable personnel and for the leaders’ philosophy to be absorbed. I think if NRI were to break itself down into the smallest organizational units possible, and augment the decision-making authority of those in each location, it would help cultivate the next generation of top management. With that said, NRI is currently pursuing its digital strategy at an accelerated pace, as it has been ever since the launching of NRI Digital as a new company back in 2016.

When you’re creating a new business, it’s important to narrow down your strategy, but it’s even more important to act on it. If you don’t run with it, nothing can begin. Instead of just thinking about it and waiting for your odds of success to go up, you’d do better to contemplate things while they’re in motion, test them out right away, and recognize any missteps you’ve made. Making small mistakes but learning from them in this way is more essential than anything else when it comes to starting a new business.

Digital reforms aren’t simple and straightforward to pull off, but if you can see results little by little in relation to your strategic vision, more people will be willing to carry things forward with you and to support you. That’s precisely why I want to see us take small steps and make steady progress in the area of Business IT. I want to rapidly get it to the point where all our members are capable of acting independently, and enjoy the work they’re doing while also being recognized for their value in the world. 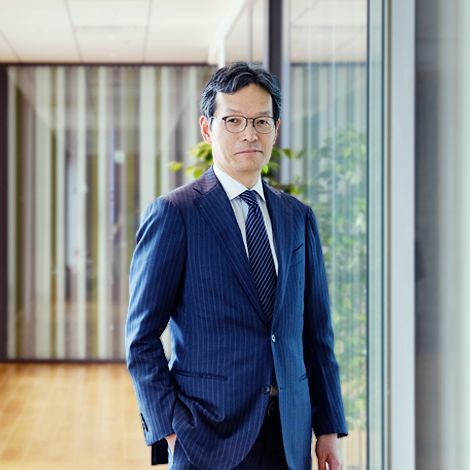 2015
Made Senior Managing Director at NRI, and IT Platform Innovation Department Manager

2000
Seconded to NRI Secure Technologies at the time of its founding; appointed head of Business Development Department

About NRI's IT Infrastructure Services