—How Has the COVID-19 Crisis Changed People’s Lifestyles in Japan?—

Tokyo, November 19, 2021 - Nomura Research Institute, Ltd. (NRI), a leading provider of consulting services and system solutions, conducted a door-to-door survey of 10,000 men and women aged 15-79 across Japan in August 2021, in which respondents were asked about their lifestyles, values, and consumption habits. NRI has conducted this survey every three years since 1997, with this last survey marking the ninth in the series.
The main results of the survey are the following five points.

Despite a strong outlook for worsening economic conditions and earnings ahead, people’s levels of life satisfaction remain high

While the percentage of people who thought that economic conditions would decline from the current year to the next had been on a downward track, having been at 40% in 2012, then 22% in 2015, and just 19% in 2018, it rose to 46% in 2021 (fig. 1). This was the highest percentage seen since NRI first began conducting the Questionnaire Survey of 10,000 Consumers, reflecting significant concerns among the population about the chances of an economic recession brought on by the Covid-19 crisis.
Similarly, although the percentage of people who believed their household income would decline over the next year had also been falling, coming in at 30% back in 2015 and dropping to just 24% in 2018, it grew to 33% in 2021, suggesting that people’s income-related outlook had also deteriorated (fig. 2).
However, people’s level of life satisfaction (total percentage of “satisfied” and “somewhat satisfied”) in the 2021 survey came in at 78%, indicating the highest percentage ever seen since the survey was first conducted. Although people are continuing to practice self-restraint because of the Covid-19 crisis, it would seem that given the extra time they have gained from this voluntary restraint and the spread of digitalization in their daily lives, they are finding a sense of fulfillment in their new lifestyles in the era of Covid-19 (fig. 3).

Work values becoming more diverse thanks to the growing adoption of teleworking etc.

Looking at the changes in people’s work values over the past 20 years, we see that rather than devoting themselves to their companies’ growth or their own career advancement, people are becoming more concerned about achieving a work-life balance, and in recent years people have become more inclined to take on side jobs (fig. 4).
Despite the spread of telework with the Covid-19 crisis, only 22% of all workers were actually able to engage in telework, with those in management positions, clerical positions, and specialist roles tending to be working remotely, and with the telework trend being more prominent at companies with higher numbers of full-time workers or employees on staff (fig. 5). A notable characteristic of those engaged in telework was that they were more concerned with contributing to their companies and more inclined to use their surplus time to obtain qualifications or take side jobs, and they had a higher degree of work satisfaction (fig. 6).

Looking at the proportion of leisure activities frequently done on days off or during free time, we see that people spent less time on “public leisure” activities which had previously been on the rise, such as “eating out, fine dining, and food tours”, “going to the movies, theaters, and art exhibits”, and “karaoke”, with these instead being overtaken by “digital leisure” activities like “watching videos or DVDs at home”, a reflection of the growing use of video streaming services (fig. 7).
With regard to purchasing channels as well, the proportion and frequency of online shopping both increased. In particular, the percentage of those who said they sometimes purchase a product purely online, without visiting a store (including those who “somewhat” agreed) grew from 28% in 2012 to 49% in 2021, indicating that amid the self-restraint being practiced during the Covid-19 crisis, people are becoming increasingly likely to do all of their purchasing on the internet (fig. 8).

A look at the changing percent distribution of the “four shopping styles” established by NRI reveals that the proportion of “convenience-focused shopping” (i.e., placing more importance on convenience than low prices when making purchases) decreased from 44% in 2015 to 41% in 2021, whereas that of the “premium-focused shopping” style (i.e., paying for the added value of personal preferences) rose from 22% in 2015 to 24% in 2021 (fig. 9). With annual household incomes holding steady thanks to improved employment conditions and the rise in dual-income households (fig. 10), it would appear that the ongoing practice of self-restraint brought on by the Covid-19 crisis and the resulting extra leisure time have led consumers to find whatever enjoyment they can in the context of their restricted lifestyles (i.e., “preference-focused”).

The percentage of personal smartphone ownership among consumers overall has successively risen, from 23% in 2012, to 52% in 2015, to 71% in 2018, and finally to 84% in 2021. A look at the results by gender and age shows that in 2021, smartphone ownership had become more prevalent among middle-aged men and women in their 50s or older, with more than half of respondents in their 70s (57% of men and 54% of women) reporting that they owned smartphones (fig. 11).
Regarding the information sources people used in relation to their spending habits, the percentage of respondents who said they relied on “television commercials” or on “radio, newspaper, and magazine ads” etc. has continued to decline since the 2012 survey, with more people now consulting information on the internet such as “internet top-selling product information” and “review sites and blogs” (fig. 12).
Meanwhile, the responses “in-store product displays and information” and “opinion of sales staff etc.”—which had been the most highly cited since 2015—have now started to decline, as people are tending to avoid going out and coming in contact with others as a result of the Covid-19 crisis. 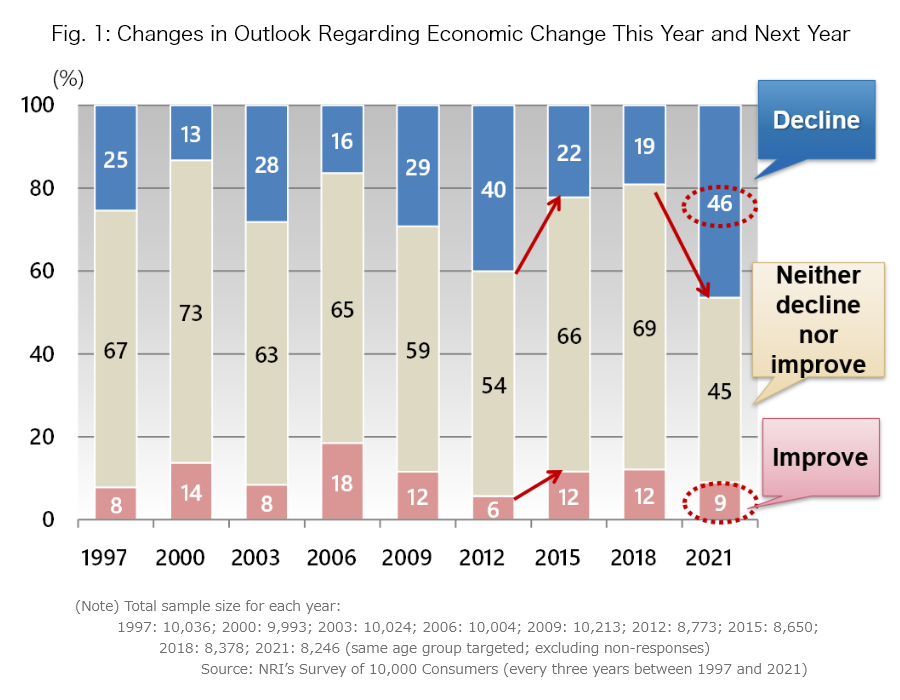 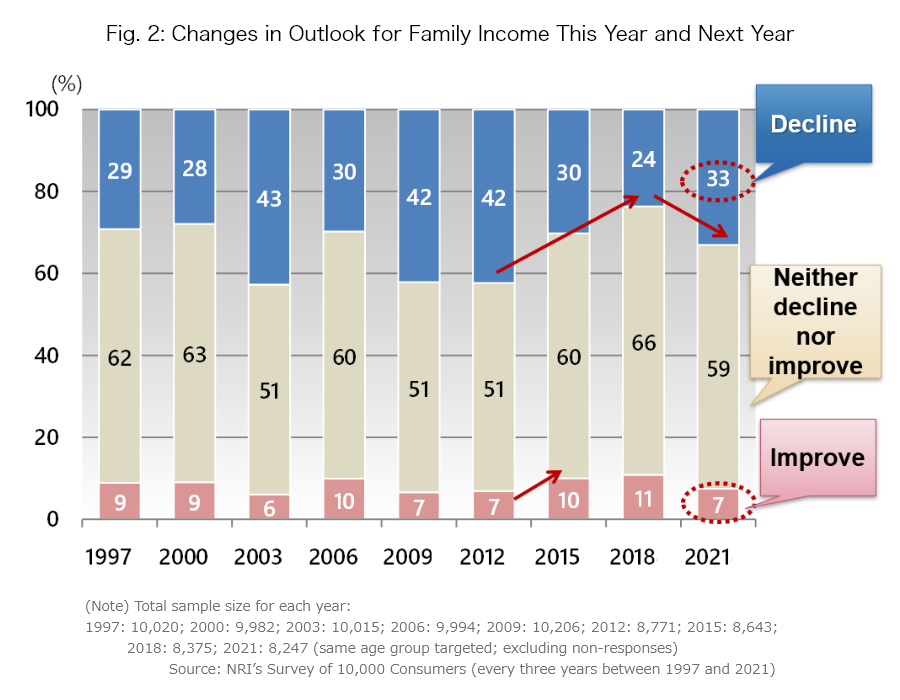 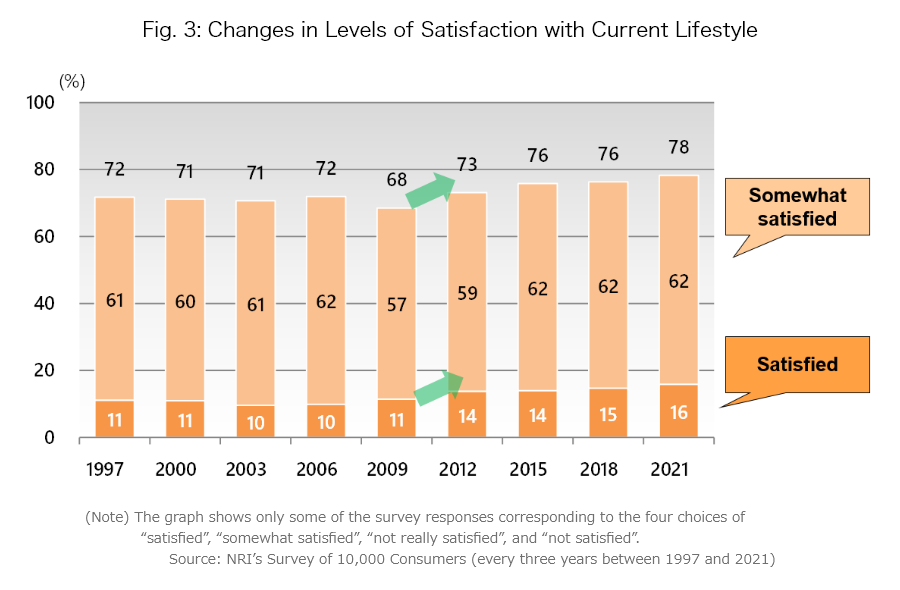 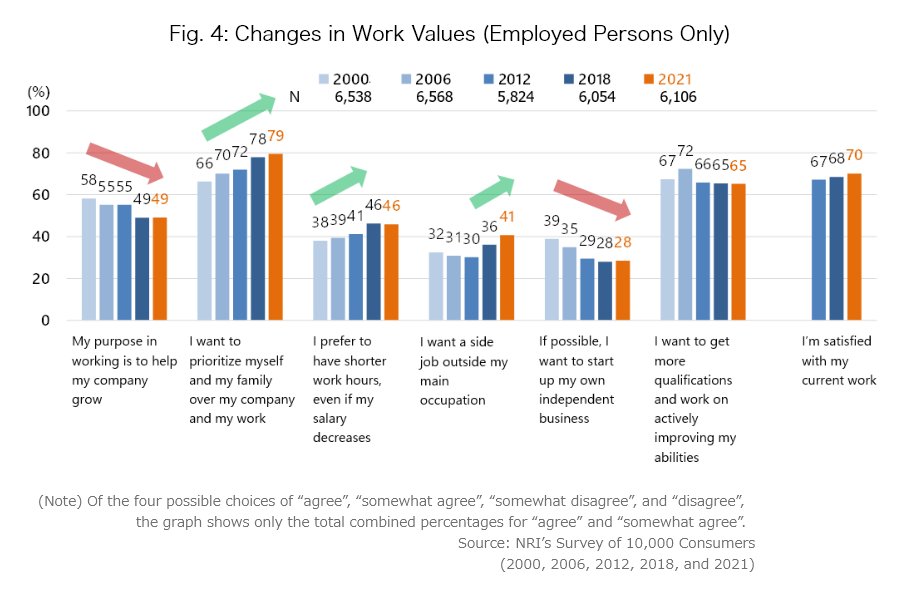 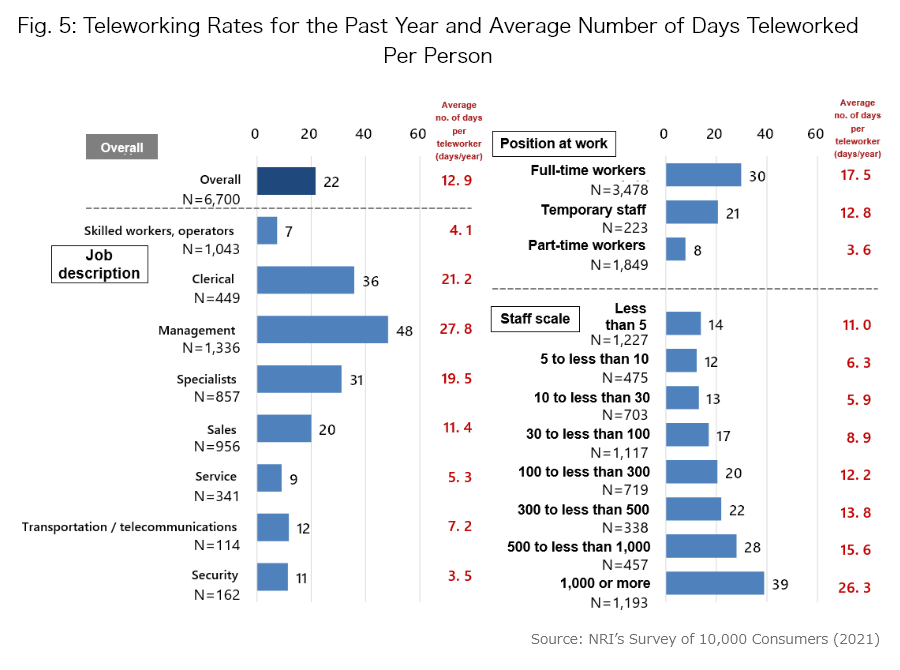 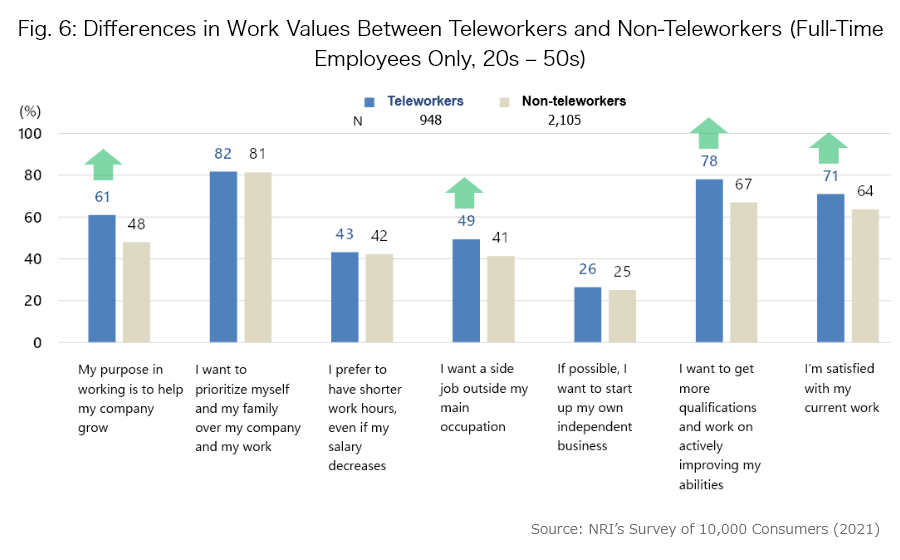 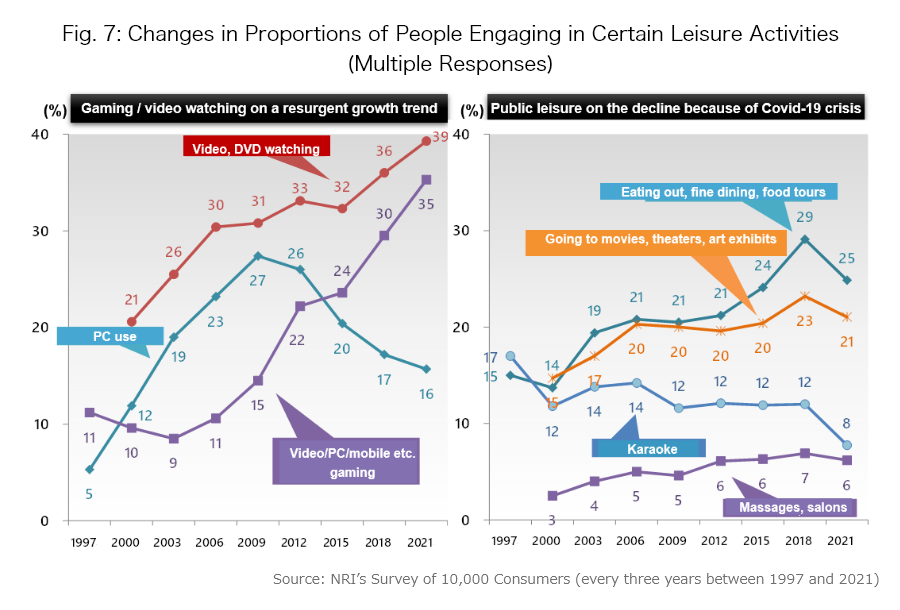 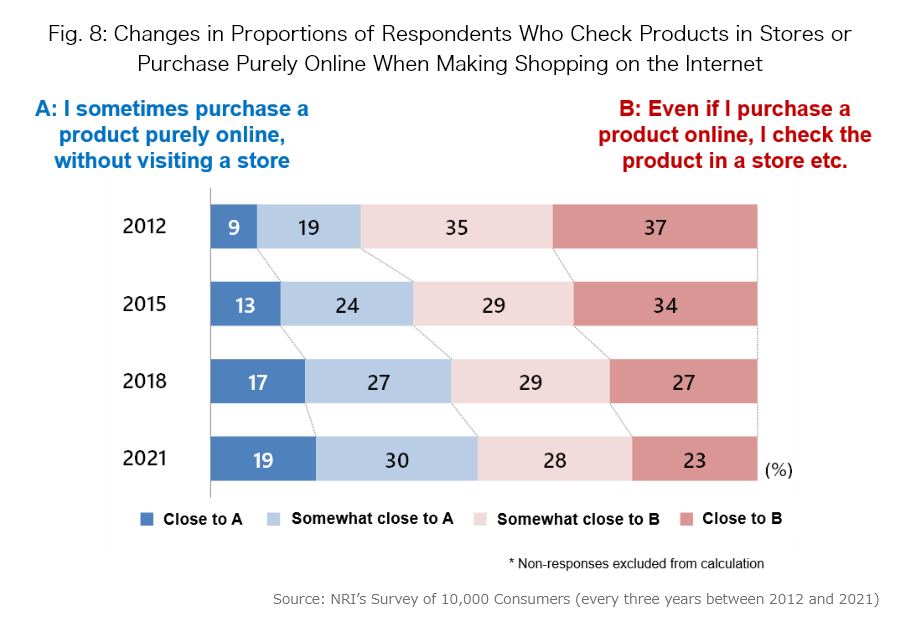 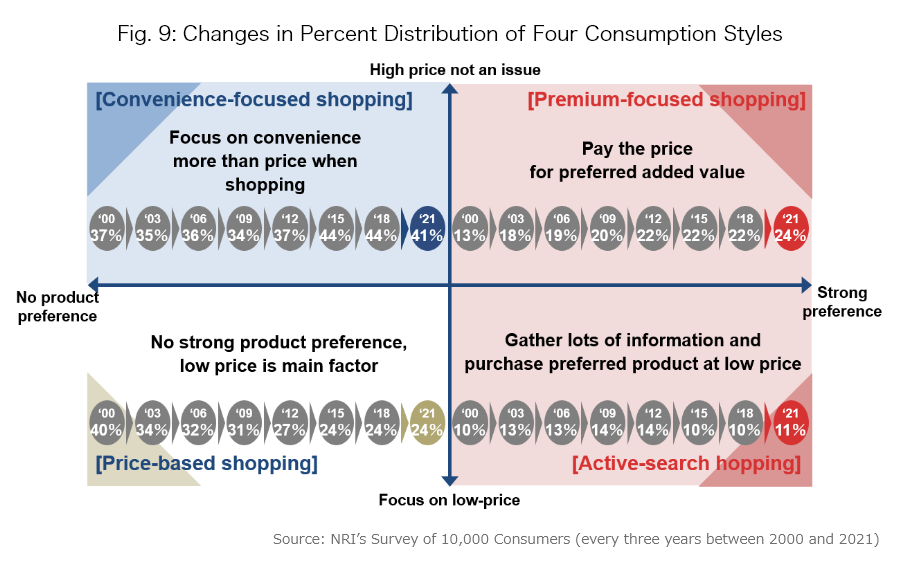 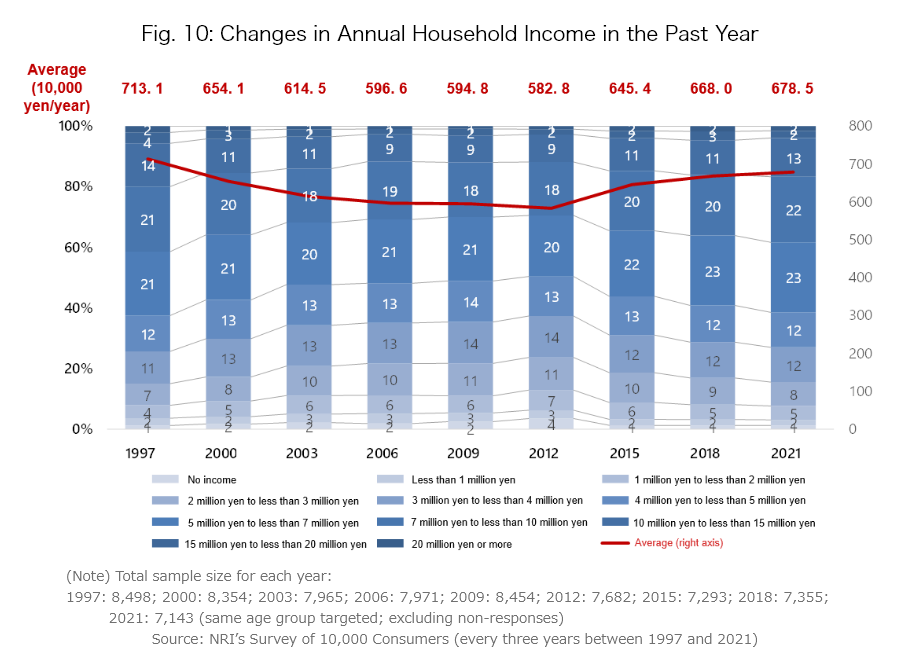 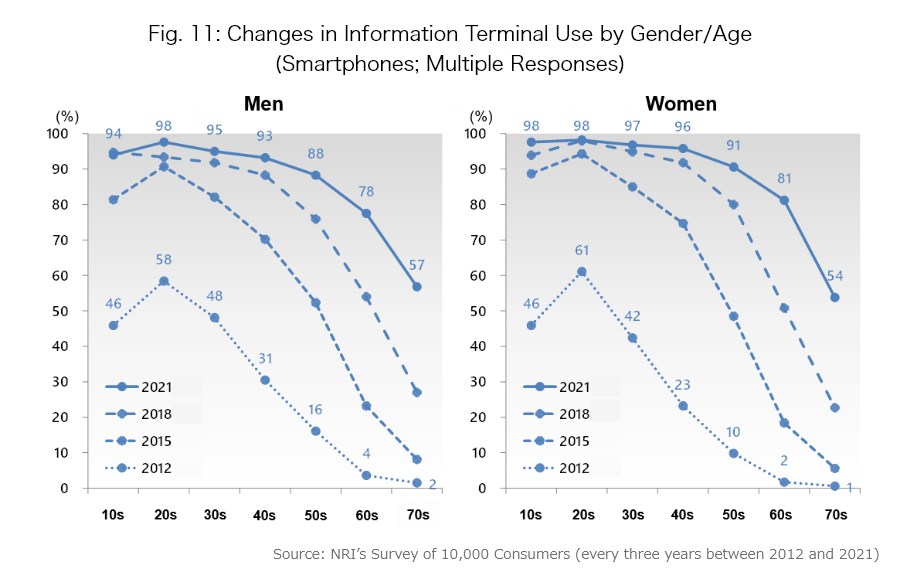 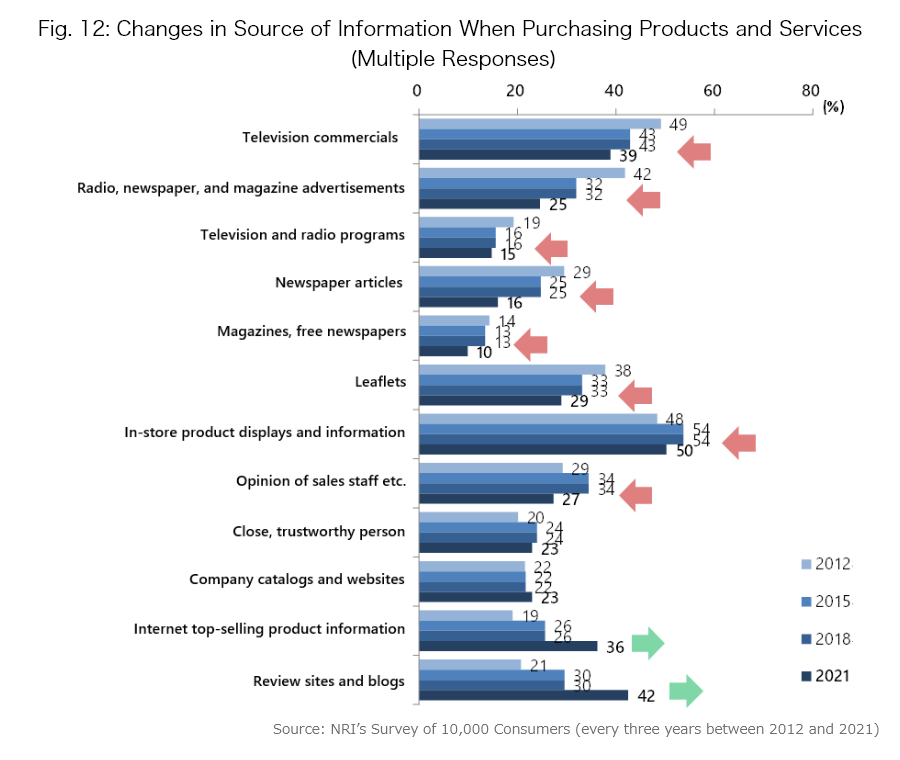